It's been a week since I started my Ten Squads in Ten Days and today you're in for a treat because of all the squads I'm sharing this is by far my favourite.
It's a squad that may not look glamorous on first appearance but there's some genuine hidden strengths in here and it's a real blast to play.

When I came up with the idea of doing Ten Squads in Ten Days it replaced the fact that I was going to write a blog about maybe just a couple of my squads.  Maybe even just one of them.  This one.  Of all the squads I'm sharing this is the one I've spent most time with on the table and that's in large part because it's the one I've most enjoyed flying.

I'm going to start by showing you the squad that I've been using, then go back in time a bit and explain how I got to this build of it.

Regular readers may remember that when I was talking about approaches to squadbuilding in 2nd Edition I recommended making an effort to look at squads that wouldn't necessarily interest you, just because it was going to help you learn the card pool.  Well, this is the squad that probably most cemented that in my mind as a great idea because the concept of Junkyard Falcon started when somebody shared the following list with me...
I had zero interest in this squad.  Ze-ro.  I'd long since written off the 2nd Edition Lancer now that it only had a 2 dice rotating arc and spending 104pts on a Falcon with only 2 red dice seemed like a massive waste of time.  You've got 199pts here and could easily wind up only throwing 4 red per turn from it.  Pfft!

But I hadn't really explored the Scum ships properly so while the guy who posted it was busy with the sales pitch of how many red dice the Falcon could actually throw (+1 for Han, +1 for Trick Shot, +1 for Lando's title) I was already chopping and changing and reshaping the squad to see if I could find a build I was a bit happier with...

The real play here was switching out Asajj's force point (which cost 10pts more than Ketsu) to play Ketsu with Maul crew (which was 13pts more but gave me a Talent slot not a Force Power slot) then downgrading the Escape Craft to pay for it all.  I think the 2nd Edition Lancers are really struggling for something awesome to do with all the blue maneuvers on their dial - there's no PTL or Glitterstim to turn those blue turns into extra action economy.  With Squad Leader I can at least push those actions over onto Han's big gun and give him all the mods he'll need.  I still didn't love the list, but I could see how it might work and wanted to try it out.

And then I had my own words thrown back in my face (quite rightly).  My approaches to squadbuilding demanded spending less points on upgrades and more on ships and firepower.  Yet this squad (that I now liked) was still spending a lot on upgrades and with the Escape Craft attached it was still a 103pt Falcon.  Discussing this list I was challenged again and again and each time I came up short...

Was Dengar worth it?  Probably not.

Did I need Engine Upgrade?  Probably not.

Was the Autopilot Drone worth it for 2 more shield points?  Probably not.

Was 96pts of Ketsu going to do enough damage?  Probably not.

So let's take all that away, strip it right back to the bits you really need and start again.  You can get the red dice buffs out of Han for just 60pts.  You can turn Ketsu down to a Trandoshan Slaver and save another 20pts.  That's 60pts spare.  That's a whole new ship and not just a Z-95... like a whole new proper ship.  I initially lumped for a Trajectory Simulating Lok Revenant then picked up on all the people raving about Palob in the new HWK and have never really looked back.

And is it good?  Well let's start with that HWK.  I remember having discussions in 1st Edition about which pilot had the best ability in the game and even among some of the bonkers overpowered stuff that was in 1st Edition there was frequently consensus that if Palob Godalhi didn't have the actual best pilot ability then he was pretty close.  The only reason Palob wasn't a monster on the table was that he was in a HWK and HWKs pretty much sucked.  Well, this is 2nd Edition now and I'd like to introduce you to the most undercosted card presently in the game: the Moldy Crow title. 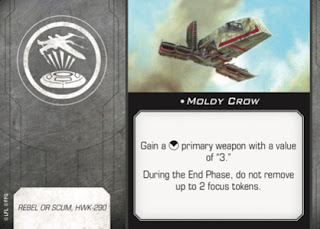 You could double it's price and you'd still be in the ballpark for the value you get from this upgrade.  Moldy Crow is nucking futs.  Palob has a nucking futs ability.  The two combined are utterly nucking futs considering the ship comes in WITH COOL UPGRADES TO KEEP IT ALIVE at less than 60pts.

TL;DR: I don't even begin to understand how Moldy Crow only costs 12pts.  Oh, and the HWKs can boost and jam now, I totally forgot about all that goodness sitting on top.  GLHF!

Next up is the Trandoshan Slaver - the humble 'party bus'.  Well at this party Lando is the DJ manning the decks while IG-88D brings him the requests.  The YV-666 is always a pretty straight forward ship - it fly, it shoot, it die - but in this incarnation it offers a lot more dice mods and durability than is immediately obvious.  There's basically three modes for the Trandoshan Slaver:
All three options are good, all three options are solid.  Yeah the YV is a brick but it's a brick that mods its dice better than most other things in 2nd Edition right now and that's a valuable commodity.

And lastly, there's Han Solo.  Stripped way back his Falcon costs way less than it used to but it's still got all the key functionality to throw more red dice than you'd expect or to dive in close and stress people with 0-0-0 and Rigged Cargo Chute.  And you know what, Han kind of likes not being the centre of attention any more because he's actually a bit of a wallflower.  While Palob and the Slaver are holding the centre of the fight Han is really happy to just skirt around the outside taking Trick Shots through the debris.  In my experience as soon as the opponent decides to start chasing Han as their priority he gets much worse - it's that much harder to keep obstacles between you and them and you wind up burning actions on boosting or rotating your arc instead of modding your dice.  Keep the punk kid Han Solo cheap and easy to ignore and he'll get work done, though.

And, yeah.  This squad really works.  There's synergies within each ship (I've not even touched on how I don't like Elusive or L3-37 in general but really like them on Palob specifically because of his ability) but there's also synergies in how they work together in concert.  It's fun to fly, it's fun to hurl lots of dice with Han, it's fun to shred people with Palob and Jam them up for no good reason other than you've already got all the tokens you need anyway.  And yes it's even fun to fly a brick of a YV-666 into their face and watch them try to work out whether it's worth shooting into the Reinforce or not, or try shooting at Palob with all his green dice, tokens, Elusive and L3-37.

And I've not even got onto that this isn't even my current version, or all the options you can pursue.  You could drop the Slaver for a cheap Firespray like Koshka, or an IG, or a slimline Guri, or Fenn Rau, or even just for three Binayre Pirates, or... or... or...

Goddamn there's some awesome stuff in Scum.  Everyone, just go play Scum,  they're great.
Posted by Stay On The Leader at 13:02