It's day five of my Ten Squads in Ten Days, we're halfway there and I don't know about you but it's getting so close I can almost reach out and touch it.
Today's squad features a team of pilots want to go fast.  How fast, you ask?  They're going straight to.... LUDICROUS SPEED!!!

No flashy squad name this time, and that suits a squad that's pretty no-nonsense and just sets out to do the dirty work with a set of unglamorous generic bombers.


While the TIE Punisher is enjoying an unaccustomed moment in the sun as everyone's favourite Trajectory Simulating bomber the opposite is true of the Rebel equivalent, the K-Wing.  Having terrorised the metagame for much of the last 18 months the SLAM-bombing K-Wing has been given a real beating in 2nd Edition and most of the best reasons for using a K-Wing have gone (namely Harpoon Missiles, Twin Laser Turret, post-SLAM bombing and Miranda Doni's crazy old pilot ability).  I mean, with the dreaded little primary bowtie arc replacing the Twin Laser Turret what even is left for the K-Wing to do?

Well the answer may be 'nothing good' but I don't want to give up on them quite that easily and there is at least one decent trick up the K-Wing's long and ungainly sleeves - it's the turreted ship that can manage to cover all 360 degrees with threats!

Because the K-Wing can equip Barrage Rockets it can set the 'bowtie' arc to cover the left and right arcs while it presents a missile threat from the front arc and drops Proton Bombs from the back.  That's almost everything covered off, a bit like the old turreted ships of 1st Edition!  It's not flawless - you can't use the Barrage Rockets at R1 in the front arc, for instance - but where other turreted ships might struggle to keep arc on opponents the K-Wing is actually pretty much 'set and forget' and can spend its actions on Focusing, SLAMing, and Reloading more nasty bombs.

That brings us around to a new strength the K-Wing has compared to 1st Edition, namely that with a Medium base it's actually a bit faster than its old model, especially when it's SLAMing up and down the table.  This squad aims to make full use of that by spending a ton of time just SLAMing around at high speed dropping bombs, then taking potshots of opportunity as the enemy struggles to keep up.  The kicker magic ingredient is the lovely Sabine Wren, whose 2nd Edition version isn't quite as outright devastating as she was in 1st Edition but could be no less frustrating.  The threat that your Proton Bombs and Seismic Charges could hand out stress/jam/tractor tokens at unfortunate moments has to be something that your opponent respects and it's just going to add to their confusion of how exactly they should approach dismantling these new K-Wings. 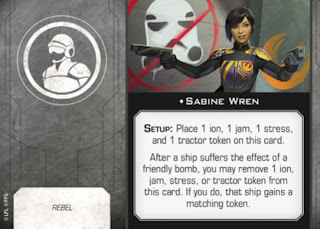 Ok, I'll level with you.  Christ knows if it'll work or not - I've not put this on the table yet - but my spidey senses are tingling that this squad will do enough unexpected things with that speedy SLAMing and all-round threat that your opponent will likely struggle to adapt to what you're doing until it's too late.  I imagine that if you play somebody half a dozen times they'll figure it out eventually but I think you'll be able to pick up a few wins along the way while they get through the error part of 'trial and error'.  Can they afford to joust into 12 red dice of Barrage Rockets and 36 hull, then k-turn into Proton Bombs?  And if they're not going to do that then can they really reposition for a favourable engagement faster than the SLAM-speed K-Wings on their medium bases?

It's something that I at least want to see played out on the table because I'm not prepared to give up on the versatile K-Wing platform just yet.  And that's a nice link into tomorrow's squad as well...
Posted by Stay On The Leader at 23:58