Only nine more sleeps to go until Second Edition!  Yesterday I shared the first of my ten squads in tens, the updated version of my old favourite Guns n Ammo.

Today there's a second squadlist and what better list to share, with nine days to go, than one featuring Nien Nunb?

I'm sure that I've not been alone in trying to find a convincing 'fat Falcon' build to field, especially one that gets to use Lando Calrissian's new & improved pilot ability as a free Push The Limit for more action economy.

The trouble with the Falcon lists is that they get really expensive pretty damn quickly.  It's pretty hard to bring one in for much less than the equivalent cost of the old 'Fat Han' builds from 1st Edition, and when you do throw all those points at it you still wind up with a ship that's still nowhere near as good as it once was.  The major problem I couldn't overcome in my mind was that even if you stripped out all the other factors you just couldn't afford to spend 130/140 points on only flinging 3 red dice at the opponent.

This was only compounded by the compromises you were having to make in the other side of the squad to field a competent wingman with the few points you had left. 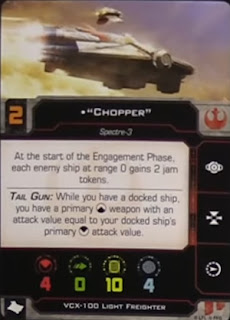 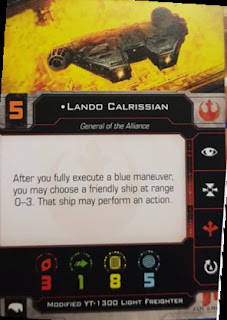 I'd basically given up on building a fat turret that I was prepared to play but I did keep coming back to the concept to fiddle around and see if I could find an angle that made me think it could work.  Then I had a bit of an epiphany that kind of made the whole 'fat turret' thing very straightforward...

When you've already spent 100pts on a fat turret then spending 14% more on Bistan adds 100% more to the amount of red dice you fling.

14% more cost for 100% more damage output?  That's far too good a deal to pass up, it solves my massive concern about not throwing enough red dice, and it gets over the weakness of the Falcon's 'bowtie' arcs by letting you double down on the arc that's actually pointing at the enemy.  I think that's more important on Lando than on Han, by the way, because Lando is pretty committed to his long blue banking maneuvers around the outside while Han can be more flexible and get in amongst the enemy a bit more to use both arcs.

In this squad I've kept Lando pinned down the very basics that he needs to function and hurl those red dice and that's freed up more points for a chunkier wingman - the less I spend on toys for Lando the more I get to spend on red dice for the rest of the team!  88pts is the cost of a generic YT-2400 and there's a decent argument for running both fat turrets and just playing 'keep-away' with 10 red dice and wait for the opponent to melt but in this version I've mixed it up a bit more and taken Chopper in the VCX-100 to hold the middle of the table while Lando does his long strafing runs.  Chopper can serve dual function of throwing huge fully modded hammer blows with Saw backing his big primary cannon, and of blocking opponents and stripping this tokens so that Lando can pick them off from afar.

I'm still not a big fan of the fat turret concept in 2nd Edition as I think they're overpriced at the moment.  But if I was going to put one on the table I at least feel like this has the firepower and efficiency to lay some hurt on the enemy as they try to chase you down.

I really won't be making a habit of this bonus list thing, but if you're rejecting my claim that you can't really run a fat Falcon and you absolutely definitely want to try and make Fat Han a thing in 2nd Edition.  I'd probably run him like this...

Han's Got A Fat Ass

No Engine Upgrade because Kanan lets you red boost if you need to and still clear stress with a good white maneuver.  Kanan also works nicely with Inertial Dampener to slam on the brakes - this is a tough Falcon to chase because it can go really quickly or just stop in mid-air.  Along with a ton of maneuvering flexibility this Falcon has all the defensive buffs and Force points and Regen you could ask for.  It just costs a bunch of points for only throwing 3 red dice.  A BUNCH of points.  The Sabine attack shuttle is probably the tankiest ship you can field and still bring a decent bid to ensure Han has control of knowing where he needs to be.  That's the real cost of spending 140pts+ on a Falcon!