After my love letter to the Scum & Villainy faction yesterday it's going to be a Rebel-heavy day on on the Stay On The Leader blog.  I'm up this morning with the third of my Rebel squads in these ten days, and then hopefully later today I'll be finally be able to bring you our Rebel faction review... and it's a doozy!
I'm marking your card for the Rebel review later, because you will want to make sure you read it, but until then you know what it's time for...

One of the most durable Rebel squad concepts of the last few years has been the four-ship Rebel squad.  I'm thinking now right back to the tail end of 2015 and the birth of the 'Stresshog' Y-Wings my formative time in the game was full of the likes of Biggs Darklighter running alongside a rugged toolbox of Rebels.  Over time that toolbox changed -  in came Lowhhrick, or Captain Rex, or Ezra's Sheathipede - but the basic principle of the Rebel jousting block persisted.

How well does that concept translate into the opening waves of 2nd Edition?  Well... it's definitely a struggle and you notice a lot more what's not there than what is.  There's no sign of R3-A2 for either a Y-Wing or Sheathipede to bring, the defensive annoyances of Fenn Rau, Lowhhrick, Captain Rex, Biggs and the old Selflessness have either got more expensive or less effective, and a lot of the key synergies have been broken as a result.

I know for sure that I'm not alone in trying to make this model work, not least because there's always so many Rogue Squadron fans out there trying to cram X-Wings into everything they can.  But I know from talking to players around me that the Rebel faction is currently proving very frustrating to build for and many of us have been knocking ideas around in this sort of area without finding a squad that we feel completely comfortable and confident in.

We've been all around the houses in this thing.  Some of us have championed Luke, some of us have tried to make the Two-Tubes brothers a thing, some of us have been working on Norra, some of have been trying out old 1st Edition stalwarts like Lowhhrick or Shara Bey.  If there's a secret sauce we've not found it yet.

The above squadlist, then, kind of came out of me shrugging my shoulders a bit and just grabbing bits of what we think are good from a lot of different squads I've seen tried and just stirring them all into each other, hence why it's been dubbed a Rebel 'salad'.

Wedge and Biggs lead the way as two of the classic X-Wing pilots who were right there at the start of X-Wing Miniatures Game 1st Edition.  The new X-Wing has picked up a lot of the gradual buffs it received, like Integrated Astromech or the adjustable S-Foil settings, and incorporated it into the base chassis.  That makes the X-Wing a great all-rounder, but unfortunately probably also means it's stepping on the toes of all the other Rebel ships... an X-Wing with S-Foils closed is a lot like an A-Wing, an X-Wing with S-Foils open isn't that much less durable than a B-Wing now that it has more hull.  It all means that a pair of X-Wings are a solid, if uninspired, start to your squads.  They're a solid foundation to build on.

The Sabine Wren attack shuttle is something you've already seen used in Day 2's bonus list and it reappears here.  At 40pts I think this is a proper little pocket battleship as with Sabine Wren's pilot ability allowing you to chain a red Evade (a white Evade with Debris Gambit) the little shuttle is a cheap way of getting a 3 red dice gun onto the table that also has action economy inbuilt with a free reposition/Evade action on top of it's main action.

The Attack Shuttle may not have seen much table time undocked from the Ghost in 1st Edition, but when you're trying to cut corners to maximise the efficiency of a Rebel list the Sabine shuttle has rapidly become one of my frequent go-tos. 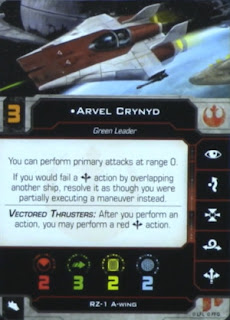 This list has chopped and changed between Jake and Arvel in the A-Wing, although I'd run neither with any upgrades.  The Rebel A-Wing is currently a bit of a lean and simple type of ship rather than one I'd try to pack to the gills with upgrades, as we often saw in 1st Edition.  A lot like Soontir I think Jake or Arvel can really afford to just trade off the economy they get from their Vectored Thrusters and pilot abilities.  Jake makes sense from the 'Rebel Salad' idea of supporting each other, but I've gone with Arvel.

This 2nd Edition version of Arvel Crynyd has been subtly but significantly buffed from his 1st Edition version and he's well worth a second look if you've passed over him for the name value of Jake Farrel.  The fact that Arvel can now boost into Range 0 makes him a much better all-round threat whereas before his ideal roll as a blocker was spoiled a bit by having a mid-range Pilot Skill.  He also now has built-in action economy so he can Focus then crash into people, and all the A-Wings can now Barrel Roll, which is an essential blocking tool.

And Arvel is only 36pts, which allows you to scrimp and save those pennies and bring in a fifth ship to complete the squad.  If we're making a salad then the Z-95 is the crispy croutons as topping - you could definitely make the salad without them, and nobody really loves them on their own, but it does all kind of work better when they're there.  Plus the Z-95s also benefit from a newly-found Barrel Roll action.

And well... that's kind of it. Where the Imperials and Scum factions can have a lot of tricks and techniques to explain the Rebels are left scratching around in the dirt.  The basic premise of this squad is unashamedly 'here's 5 pilots, 4 of them do something cool, let's try and wing it and see if we can come up with a plan on the side'.  But at least there's a lot of enjoyable flying in here, so it's good fun to play.  Your X-Wings can Boost or Barrel if needed, Sabine is dancing all over the place, Arvel is trying to smash into the face of the enemy, and even your lowly Bandit Squadron Pilot can barrel roll now.

But yeah, as you'll read later today in our Rebel faction review... it's not really clear yet what the point of Rebel ships & squads actually is.  I'm sure it's a reaction to just how dominant the Rebels were in 1st Edition and FFG have been playing it safe, but the Rebels are in a bad spot at present and it really feels like the faction identity is missing.

You can still just jump in an X-Wing and blow something up, though.  You have permission.