My X-Wing Miniatures Game buying guides were a big hit in First Edition and with Christmas time approaching it feels like a good time to dust off the old girl and get her fired up properly for Second Edition.  If you've always been looking longingly at the fantastic Star Wars ships that Fantasy Flight Games make for X-Wing and never really known where to start then hopefully this guide is for you.

It's a mammoth task and I won't be doing this alone so I'm splitting the writing duties and credits with my antipodean ally Daniel 'Gadwag' Smith.   Many thanks to him for helping me to get through this,  both in sheer word count and also with his great experience and advice in building some beginner-friendly first squads.

If you're coming in completely cold to this then let's see what Fantasy Flight have to say about X-Wing...

Enter the next era of interstellar combat in the Star Wars galaxy! In X-Wing Second Edition, you assemble a squadron of iconic starfighters from across the Star Wars saga and engage in fast-paced, high-stakes space combat with iconic pilots such as Luke Skywalker and Darth Vader.
With refined gameplay that focuses on the physical act of flying starships, X-Wing Second Edition lets you create your own Star Wars space battles right on your tabletop. Intuitive mechanics create the tense atmosphere of a firefight while beautifully pre-painted miniatures draw you deeper into the action. Man your ships and enter the fray!

Which sums it up really nicely.  In my mind X-Wing falls into the the fabled category of games that are 'easy to learn but difficult to master' and that is precisely how I like my games.  You can be up and running in your first games not long after you start, and the turn sequence is so quick and intuitive that you'll be trading laser blasts with your new X-Wing frenemies in no time.

To get a sense of how the game plays a typical X-Wing turn really consists of three key phases:


Aaaaannnd... that's it!  Your turn is over and it's back to the Planning Phase to go again.  The game can flow quickly with a real emphasis on positioning and planning to reward you with the best shots and angles of attack.

If you want to learn more about the real basics of where to start then read on, but if you're already hooked in and just want to know more about a specific faction then you can jump straight to their page by following the links below..


Almost certainly the first thing you're going to want is the Core Set box.  This is designed as the starter pack and includes everything you need to learn and play the X-Wing miniatures game: dice, range rulers, movement templates, dials, damage deck etc,  It also comes with two Imperial TIE fighters and a Rebel X-Wing. 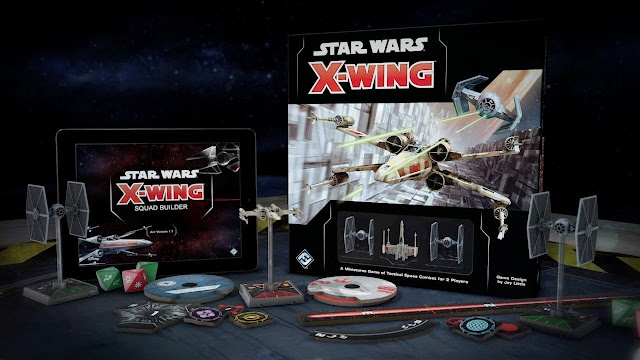 But what if you don't want to play Rebels of Imperials?  Why do you have to pay for ships you're not going to use?  Most of the game components are now available to purchase outside of the Core Set but the core set is still the cheapest way to buy all the base game components. The X-WIng and TIE Fighters are effectively free additions to the box and you shouldn't really let them get in the way of your Core Set purchase even if you know you're going to be playing Jedi or First Order and won't be using the ships. 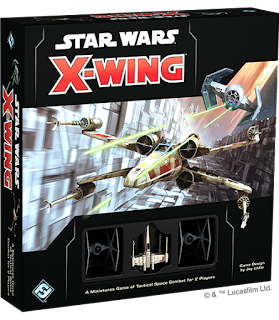 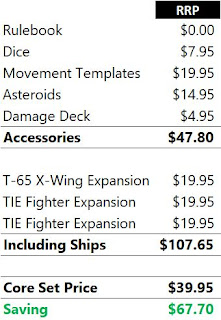 If you think you are going to play Rebels or Imperials, though, then you should 100% be buying the Core Set.  Not only do the ships give you a nice head start into building your first squad but they come with some unique pilot cards that you'll want to have, namely Luke Skywalker and Iden Versio (the heroine from the Battlefront II video game) and they're both pretty awesome pilots.

Well, unless you've got very deep pockets it's probably a good idea to pick a faction and assemble your first squad.  If you're going to be playing at home against your friends then you can do whatever you want, but heading out into the wider X-Wing world you'll probably need to assemble a 200 point squad.  200pts that's the universal standard that almost every store, club and tournament will work to, and that may sound like a lot but don't worry as a 200pt squad is usually only 3 or 4 ships!

The Second Edition of X-Wing uses flexible points costs for squadbuilding so you won't find points information on the cards or in the expansion packs.  Instead you'll need to head to the FFG website and download the latest points values...

OR get yourself off the app store and download the free squadbuilding app for iOS or Android.

IMPORTANT  UPDATE (NOV 2020): although FFG launched the squadbuilding app with a great fanfare it's fair to say it's not been a huge success and it isn't always updated with the correct points or upgrade slots.  It's still there to use but I would recommend using the PDF versions from that link above, or better yet using the third party squadbuilders linked below.

As a handy tip there's also a couple of great third party tools for making squadbuilding easier, and you'll find that most veteran X-Wing players swear by either Launch Bay Next (also available on iOS or Android) or the browser-based Yet Another Squadbuilder (I'm a YASB man, myself).

If the idea of plunging in and working out a 200pt squad is really daunting then don't worry, we're going to give you some sample first squads for each faction so you can go out and get started easily!

All you need to do right now is choose a faction...

The X-Wing Miniatures Game allows you to jump into the Star Wars timeline wherever you like.  There's seven factions in the game meaning you can play your favourite ships and characters right the way from The Phantom Menace all the way up to Rise of Skywalker! 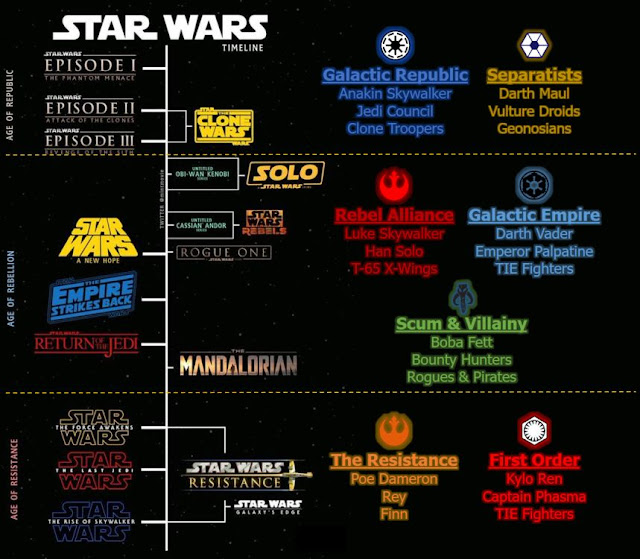 Each faction has their own ships, pilots and playstyle and although individual power levels can wax and wane over time all of the factions are roughly equal in strength.  X-Wing squadbuilding has flexible points costs that FFG update bi-annually to keep the game in good balance.  This all means you're free to choose the faction (or factions) that appeal most to you.

We'll talk about the individual factions in more depth on their respective pages of the guide, but here's a quick overview so you get a flavour or what's out there: 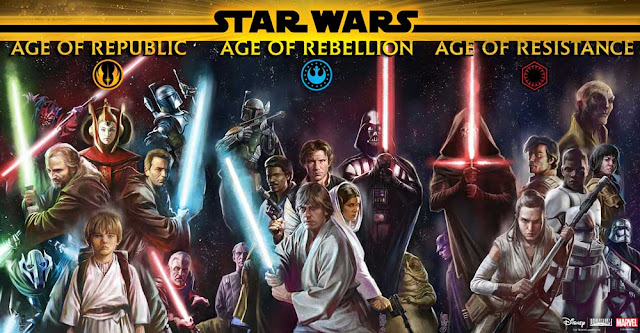 If you think you know one or two factions you'd like to learn more about then follow the images below to the faction-specific pages!


Conversion Kits and You

If you're looking at buying the X-Wing Miniatures Games Second Edition - either as a new player or a returning First Edition player - then one of the most confusing things you first see may be the Conversion Kits that are available for five of the seven factions.  What are they?  Do you need to buy one? 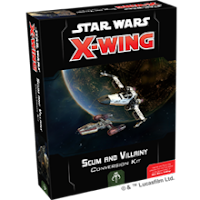 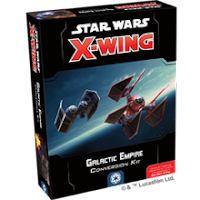 All the ships from First Edition are playable in Second Edition but not all of them have yet been rereleased in a dedicated Second Edition expansion pack (there's so many it'll take years to get through them all!).  The Conversion Kits exist to bridge that gap and give players all the Second Edition materials they need like pilot cards, upgrade cards, bases, maneuver dials etc. to use their First Edition ships.

At time of writing the following ships are ONLY available through the Conversion Kits.
For new players the Conversion Kits probably represent a point where you really commit deeply into playing a faction and that you're ready to throw some money at it.  It's a pretty big investment because not only are you having to buy the Conversion Kits themselves but you'll also need to chase down the actual miniatures of the old ships too.  You can quite happily build squads and play most of the factions using only the rereleased expansion packs, and with each passing Wave there's less and less content that's not been rereleased and only found in the kit, but until everything is rereleased you're always going to find your available options a little restricted if you don't have the Conversion Kits. 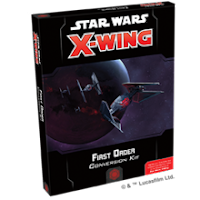 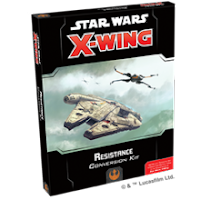 For returning players who already have an impressive stock of old First Edition Miniatures the Conversion Kit is a much more immediately attractive purchase.  Although it might feel like you're paying a lot of money to use ships you've already paid for the Conversion Kits absolutely do not scrimp on content (there's a ton of cardboard and paper inside!).  If it gets those ships of yours off the shelf and onto the table then I'd argue the Conversion Kits are great value!
Card Expansion Packs and You
These three releases are cardboard-only expansion packs that came out in 2019 and were aimed (mainly) at helping new players get up to speed on old content they may not otherwise have access to.  As every new player buys different expansions and so has access to different game components I recommend having a look at the detailed contents of the expansion before you buy them to see what you're getting that you don't already have. 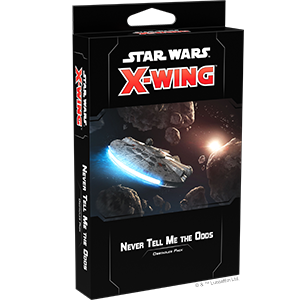 Never Tell Me The Odds: Obstacles Pack - Detailed contents here
Obstacles (asteroids, debris etc) are an important part of the X-Wing Miniatures Game but while you get some basic asteroid shapes in the Core Set there is a much bigger variety available to players, much of which was only available in First Edition expansions and hasn't been reprinted... until now.  Never Tell Me Odds adds very little to your game in terms of upgrade cards but simply having all the obstacle tokens in one handy box set makes this an expansion I'd recommend for most new players to pick up quite early on.  With the extra obstacle tokens come six game-altering 'Environment' cards that aren't used in competitive play but will spice up any casual games you may be having with friends. 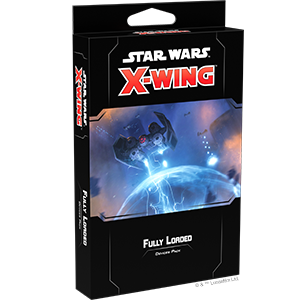 Fully Loaded: Devices Pack - Detailed contents here
Much like with the obstacles in Never Tell Me The Odds there are loads of different missiles, torpedoes and bombs in X-Wing Second Edition for you to equip to your ships, but they're scattered across lots of different expansions and conversion kits.  Fully Loaded brings them all together in one place so you'll never find yourself missing the exact piece of kit to throw at your opponents. Like Never Tell Me The Odds this box also comes with some casual-only Environment cards for fighting through minefields and so on, adding more variety to you game.  That said, I think it's a much lower priority purchase than Never Tell Me The Odds just as so many ships don't use missiles and bombs etc so you may never need any of the stuff that's in here! 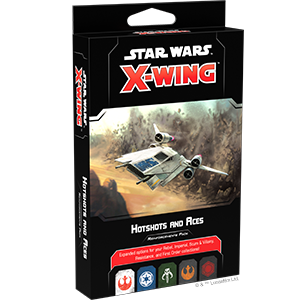 Hotshots & Aces: Reinforcements Pack - Detailed contents here
Alongside a bunch of useful upgrade cards (including Advanced Optics, Passive Sensors, Diamond-Boron Missiles and K2-SO) the Hotshots & Aces pack's main attraction is a small collection of new pilot cards for existing ships, some of which are genuinely very good pilots or have unique mechanics - Fifth Brother and Zizi Tlo alone have become competitive tournament staples.  If the other card packs are primarily for new players the opposite may actually be true about Hotshots & Aces as with pilots drawn from 5 different factions most new players will find they're paying for a lot of content they can't use in their chosen faction.  There are some really useful cards in Hotshots & Aces, though, so it may be that you can split the purchase with other new players.
Posted by Stay On The Leader at 15:33