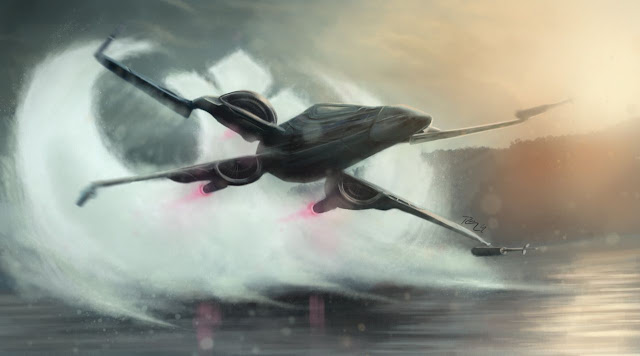 
Arriving with the release of The Force Awakens the Resistance is the future of the 'good guys' in Star Wars.  It's where you'll find heroes like Rey, Finn and Poe Dameron as well as some older version of General Leia Organa or Han Solo.  There's also just starting to be a line of new ships coming in from the Resistance cartoon series with the Fireball arriving in Wave 6, early 2020.

Ship-wise the Resistance leans heavily on the next generation of classic Rebel Alliance technology like T-70 X-Wings, RZ-2 A-Wings, the rusted remains of the Millenium Falcon.  Although the ships may often look very similar to Rebel ships they've been designed to play quite differently so the Resistance features a lot less dependency on running your teams closely together to benefit from teamwork abilities.  That can be a positive as you're not shackled to each other in the same way, but that freedom also means you're given more opportunity to make mistakes.  You want your squad to be working together ultimately, after all! 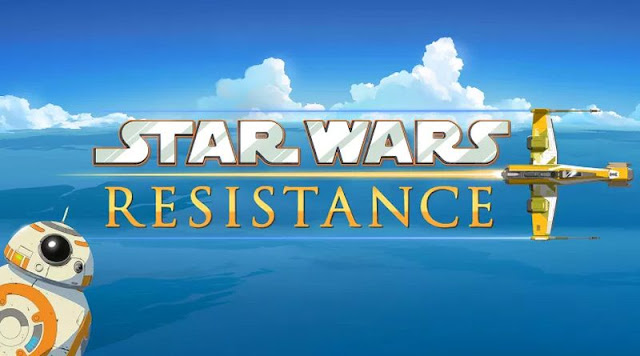 Like the Rebels the Resistance has some pretty tough ships so they're a pretty safe place for a new player to drop into the game and there's not really any bad ships in the whole faction so you can pick up whatever you like and make it work.  They're mainly focused on flying squads of one-man fighters but in the Millenium Falcon and MG100 Starfortress there are a couple of bigger options to build a squad around if you fancy a change of pace - you will need to go via the Resistance Conversion Kit to play either of those ships though.

Although most of the Resistance's best ships have been rereleased for Second Edition the frustrating thing is that most of the upgrades you will want to use on those ships are actually NOT in the Resistance expansion packs - they're great for ships and pilots but dreadful for upgrades.  The following squad is something you can assemble from just the four Resistance ship expansion packs: 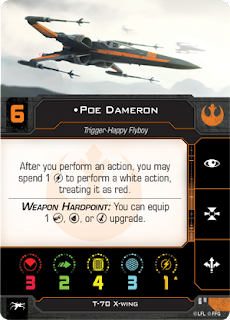 Although it adds extra cost to your initial buy-in to the faction it may be worth taking the hit and buying the Resistance Conversion Kit straight away.  It gives you a lot of the upgrades you'll really want to use (Heroic, Crack Shot, Advanced Optics, R4 Astromech) and set you up to add the Millenium Falcon or Starfortress to your squad.  If we go the Conversion Kit route you could build something much more well-rounded straight away.

Having a Conversion Kit at your disposal also gives you access to Rey and her Millenium Falcon: 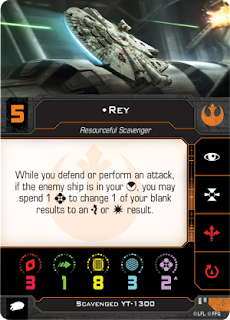 If you've got enough money set aside to go the Conversion Kit route then the whole of the Resistance Faction opens up to you and you can buy almost any other expansion packs thereafter as the ships are all good.  Without the conversion kit you're always fighting with one hand tied behind your back as you'll be fielding weakened versions of any ships you fly.

TL;DR: buy the Resistance Conversion Kit even if you're starting your collection from scratch and have nothing to convert! 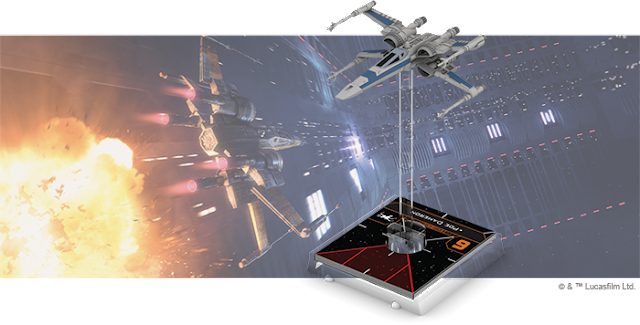 The T-70 X-Wing is probably the best all-round ship in the game, featuring enough hull and shields to take a while to kill, enough firepower to pose a real threat to any opponent and some fantastic pilot abilities to help drive you forwards.  Leading the charge is the Resistance's top ace, Poe Dameron, whose flexible pilot ability means he can switch seamlessly from defensive flying to piling on the explosions when he's got into position.

But Poe isn't all that the T-70 offers and right the way down through Nien Numb, Temmin Wexley, Jess Pava and Lieutenant Bastian you've got a raft of strong pilot abilities dedicated to ensuring the T-70 punches above its weight.  You're almost certainly going to want at least one T-70 X-Wing in your Resistance collection and it's not uncommon to field 2 or even 3 T-70s at once. 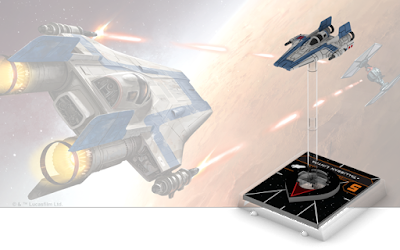 Alongside the T-70 X-Wing the RZ-2 A-Wing is one of the twin pillars of Resistance squadbuilding on which the entire faction is based.  Smaller and more nimble than the T-70, the RZ-2 A-Wing is one of the fastest ships in the game and features the powerful ability to switch its laser cannons from firing forwards to backwards.  This makes them a tricky opponent on the table as you're never sure if they're going to fly slowly towards you and continue firing out of the front, or fly right over the top of you and switch to firing backwards.

Like the T-70 there are several A-Wing pilots worth flying and it's not unheard of to see players flying as many as five A-Wings in a single squad!  Although each A-Wing only packs a modest punch the opponent can be left blasting uselessly at empty space as a cloud of speedy A-Wings swirl around the table switching between front and rear guns.

The Resistance Transport expansion contains two ships: the transport itself, which is what Leia arrives in during The Force Awakens, and a detachable cockpit pod which is what Finn & Rose travel to Canto Bight in.  Neither ship may sound too exciting but they've both proven to have their place in the game, and it's actually the little Transport Pod that has made the biggest impact!

The main Resistance Transport is a pretty unexciting support ship like the Rebel Alliance's Sheathipede or the Escape Craft from Lando's Millenium Falcon.  The reason the Resistance version is less useful is because the rest of the faction features ships that are so independently powerful that they don't really need a support ship to be effective.  When you fly Cova Nell with General Leia Organa on board the Resistance Transport changes role and becomes a tough brawler, but outside of that combinationit's not seen much use.

The little Transport Pod, on the other hand, is small but mighty.  There are great pilot abilities on three out of the four pilots and when Finn is at the controls the Pod becomes one of the cheapest and most efficient damage-dealing threats in the game.  It's well worth picking at least one Resistance Transport expansion up just to add Finn to your squadbuilding options, and it's also worth noting that there's a lot of great crew upgrade cards in this expansion that can be used on the Millenium Falcon or Starfortress to good effect. 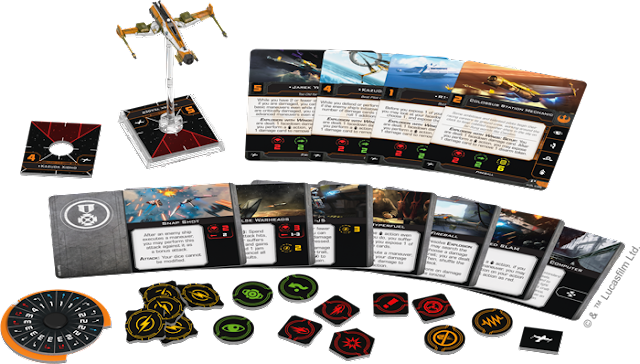 The Fireball is the main racer from the Resistance cartoon series and is frequently described as 'an explosion with wings'.  We don't know much about the forthcoming Fireball expansion but what we do know makes it sounds like the ship is going to be a lot of fun... but not necessarily very good.  And that's fine, btw, not every ship has to be a cold-blooded killer!  The Fireball is going have the SLAM action so it'll be very very fast but not really pack much of a punch, and the danger is it will just be overshadowed by the already fantastic RZ-2 A-Wing.

===== THE FOLLOWING SHIPS ARE UNRELEASED IN SECOND EDITION =====

The rusting remains of the mighty Millenium Falcon have been salvaged from Jakku and are flying once again!  This isn't the prime Falcon that the Rebel Alliance gets to enjoy - the maneuver dial is worse and it's lost a couple of shields along the way - but there's life in the old girl yet.  You'll usually find Rey in the pilot's seat of the Resistance Falcon and her Force abilities make the Falcon a tough jouster that can deal a lot of damage to anything foolish enough to sit in front of her.  The Resistance Falcon is not for the faint of heart, though: it blows up significantly more easily than the Rebel version and can take great piloting to keep the Falcon from being shot at too often. 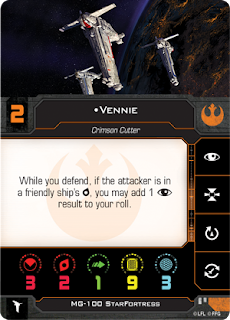 If you've watched The Last Jedi you may remember the Starfortress as the Resistance bombers that lumbered slowly into battle and mostly died long before they achieved anything meaningful.  You'll be pleased to hear that experience has been faithfully translated into the X-Wing Miniatures Game!  The MG-100 Starfortress is one of the clumsiest ships in the game and once you've loaded it up with bombs is just an attractive target for the opponent to gun down as quickly as possible.

The key word in that description turns out to be 'mostly'.  In The Last Jedi one bomber sneaks through to devastating effect and in X-Wing that role is played by Vennie.  The gaping weakness the Starfortress has is that it takes spending a ton of points to load it up with weapons, at which point the opponent focuses on it and makes sure it dies long before it gets to use all those weapons.  Vennie is the pilot who can add to the Starfortress' defenses and although you don't see her often she can be genuinely difficult to beat.

If you're the type of player who's always liked the idea of a B-17 Bomber flight simulator where you and your escort fight off enemy fighter attacks then the Starfortress is for you.  For most Resistance players the Starfortress is a ship you can comfortably forget even exists, though.
Posted by Stay On The Leader at 12:46