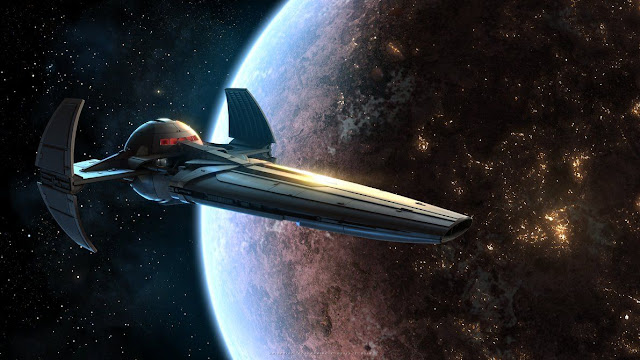 The Separatists are a loose coalition of all the various interest groups that have been coerced into serving Darth Sidious' nefarious scheme.  In this faction you'll find iconic villains like Darth Maul, Count Dooku and General Grievous but also the Trade Federations squadrons of mass-produced Vulture Droids and the weapons of the insectoid Geonosians who played such a pivotal role in developing the Death Star.  As well as featuring across the prequel trilogy of films they've also had a prominent role in the Clone Wars cartoon series

As befits a faction that brings together such a wide range of different groups the Separatist squads can be very different to one another and their ships often have very little in common in terms of how they work on the table in Miniatures Game form.  The most successful format has seen swarms of disposable Vulture droids, which are the cheapest ships in the game, and usually they're supported by one or two leaders to help give the droids a little bit of steel.  That's certainly not all the faction does and any two Separatist squads could be very different to one another - standing back with probe droids and missiles, or ducking close with tractor beams and deadly turrets - but it's fair to say that when the Separatists appear the Vulture droids tend not to be too far behind.

What almost every Separatist ship and squad does have in common, though, is that they're probably the single most complicated and frustrating faction to learn to play.  I described the Jedi as "easy to learn but difficult to master" and by that measure the Separatists are probably "difficult to learn and even harder to master".  The Belbullab is probably the only 'normal' ship the Separatists have to call upon while all the others rely heavily on players mastering tricky combinations of unusual maneuver dials and fragile ships that are propped up by complex abilities and interactions, and a need for extremely accurate flying.

If you're still reading after my concerted efforts to scare you away from playing Separatists then congratulations!  You should steel yourself for one more piece of bad news, though: because the Separatist faction features the cheapest ships in the game (points-wise) they're actually one of the most expensive factions to play (wallet-wise).  When you pay $20 for a T-65 X-Wing you're filling out 50pts in your squad, while that same $20 of Vulture Droid only goes half as far in terms of getting you to 200pts. 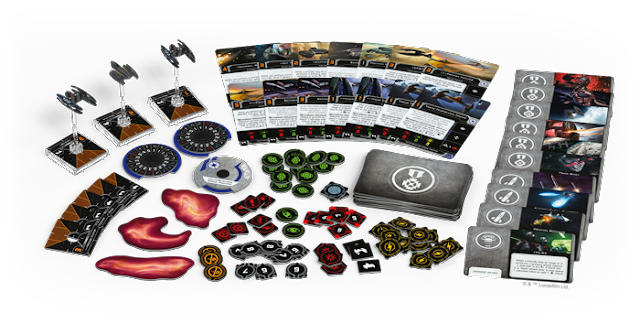 The Servants of Strife pack gives you three ships for the price of two as well as being the only box that has General Grievous' Belbullab starfighter in, making it a pretty much compulsory starting point for Separatist players.  There's one really cheap way to get Separatists onto the table, though, and that's by picking up Darth Maul's Sith Infiltrator which can quite happily cost in the region of 100pts and take up half your squad.

This example squad can be entirely constructed from one copy of the Servants of Strife expansion and a Sith Infiltrator (though you'll need to pull the Outmaneuver out of the Core Set)...

Separatists on the Cheap (200pts)

That's a pretty unusual Separatist squad these days, though, and most Separatist players will look at expensive upgrades like Chancellor Palpatine and Energy Shell Charges and think "hmm, I reckon I could buy a couple more Vulture Droids with those points".  Hurling as many Vultures onto the table as possible has a proven success rate, and with their networked calculations ability each droid makes the others stronger.  They just drain your wallet to do so, unfortunately. 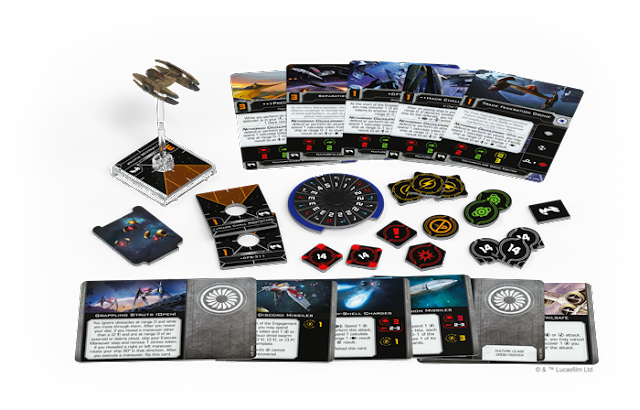 Trade Federation Vulture Droids are currently the cheapest ships in the whole game, which makes sense as stat-wise they're also the worst ships in the game.  That individual weakness is more than made up for just how many Vulture Droids you can hurl onto the table at once, though, and through their Networked Calculations ability the swarm grows stronger as it gets larger.  Despite being the 'worst' and most fragile ship in the game the Vulture Droids have actually been terrorising competitive X-Wing tournaments for the last few months.

They're not easy to fly, though.  Their robotic nature means they have a maneuver dial that loves to work in binary 90-degree turns "Left, Right, Forwards!!!" but only reluctantly switches to analogue diagonal lanes.  You need to plan ahead to minimise the impact of that weakness, while opponents will certainly try to exploit it.  Although surprisingly effective in a swarm Vulture Droids also explode very quickly once they're isolated so they can be a very frustrating place for a new player to join the game.

But the sheer number of guns you can put on the table... 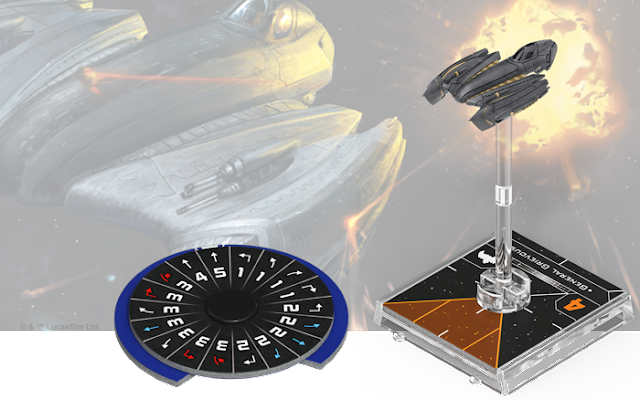 Belbullab-22 (Wave 3 in Servants of Strife)
Easy to fly, Strong

In a faction of oddballs and outcasts the Belbullab-22 is pretty much the only 'normal' X-Wing ship that the Separatists have to play with.  It's got an average number of red dice, a pretty average amount of agility and hull, a pretty average action bar and maneuver dial, and even the pilot abilities are pretty normal.

Although there's no separate expansion for it you get the Belbullab in the Servants of Strife expansion pack, and for most purposes that one Belbullab is probably going to be all you need.  They're good ships and in Captain Sear or General Grievous they're excellent additions to a swarm of Vulture Droids, particularly as the Belbullab can equip a Tactical Relay to buff all the nearby droids.  But you're rarely going to want 2 of them.  They're just a bit too 'normal'. 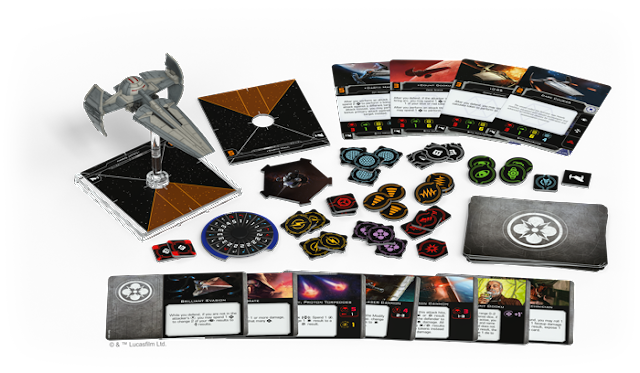 The Sith Infiltrator is the ship that Darth Maul flew to Tatooine in The Phantom Menace and in the X-Wing Miniatures Game the Sith assassin can be replaced by Count Dooku as a pilot.  Either of these powerful force users can be a potent threat on the table but compared to the raw firepower of the Vulture Droids, or the tractor beam traps of the Geonosian Nantex fighter, the Sith Infiltrator feels a little bit off the pace.

The Infiltrator's big problem comes from being a large based ship with just a front-facing weapons arc.  That's a combination that's always been problematic as it makes it difficult for the Infiltrator to keep its arc pointing at things it wants to shoot, and it takes a lot of forward planning to ensure that Maul or Dooku are in the right place when the shooting starts. 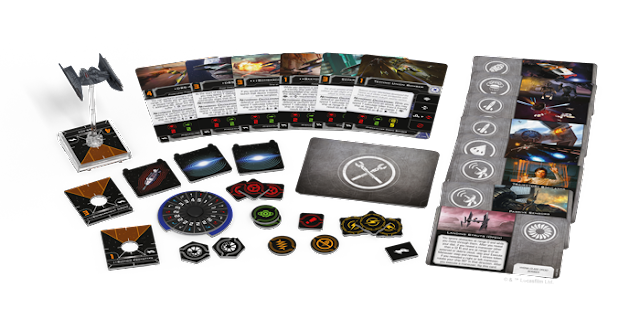 The Hyena is the Vulture Droid's bigger, meaner brother.  As this is the Separatists faction, though, it defies such simple classification and in fact every Hyena pilot in the game has different upgrade slots.  Some are bombers, some are torpedo carriers, some are support ships, some are jousters... that alone makes them a pretty complex ship to squadbuild for.  So far it hasn't really mattered, though, because 9 times out of 10 it's been better to simply buy two Vulture Droids than it is to buy one Hyena and kit it out with advanced weaponry.  That may change if FFG ever put the points of the Vulture Droid up, though - the Hyena is a good ship that's waiting for its time to shine. 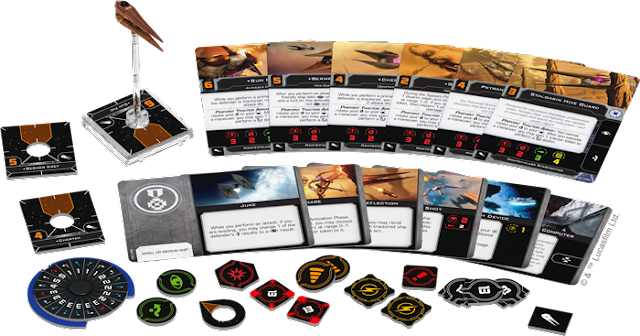 Ah, the dreaded Nantex... there's probably not a single ship more hated by the broad X-Wing gaming population at the moment.  The Separatist faction trades on complex and awkward interactions and in the Nantex that manifests as manipulating gravity fields in how their ships fly and attack, thanks to the controversial Ensnare pilot ability.  At face value a Nantex starfighter is a fragile little ship with a limited range of movement, but once the Nantex pilot starts shifting gravity fields around they can appear in unexpected places and even move opposing ships to lock them in place with tractor beams!

For a lot of players the Nantex' ability to create large 'no-go' zones on the table which enemy ships have to stay out of to avoid being hit by a tractor beam has proven less fun than the game designers probably anticipated.  Away from all that, the Nantex is yet another Separatist ship that requires you to pay close attention to the complex interactions of its gravity-bending abilities to get the best out of it.  You also have to fly with pinpoint accuracy to avoid the opponent simply swatting you out of the sky before you can become a problem.
Posted by Stay On The Leader at 13:06