BUYING GUIDE - FIRST ORDER
"Let the past die.  Kill it, if you have to"

The First Order are the bad guys who have emerged from the scattered remnants of the Empire to threaten the galaxy anew in The Force Awakens.  Here you'll find Kylo Ren, Captain Phasma and General Hux as the most recognisable protagonists, usually surrounded by their TIE Fighter escorts.  There's also the first signs of ships coming in the Resistance cartoon series, with Major Vonreig's deadly red TIE Interceptor coming in Wave 6.

The First Order currently has one of the smallest selections of ships in the game with only four available.  You're going to see an awful lot of that familiar H-shaped TIE Fighter profile in a First Order squad, although the First Order do at least have the good graces to put some shielding onto their TIEs before they push them out the door to die.  The headline-grabbing aces in the First Order fly Kylo Ren's TIE Silencer from The Last Jedi, which is a deceptively tough ship to kill, and the selection is completed by the hefty Upsilon Class shuttle which has fearsome firepower to bring to bear... so long as it can turn fast enough to keep shooting at things!

The First Order certainly leans into it's Imperial heritage when it comes to the ships it uses, although they tend to be more advanced variants.  You'd be wrong to assume that they follow the Empire's playstyles though, and Fantasy Flight have clearly made a real effort to ensure they have a different feel.  Yes there are TIE Fighters but they tend to have independent abilities rather than rewarding being played as a swarm of TIEs like the Empire does.  And although they have some speedy ships and high Initiative pilots in the likes of the TIE Silencer and Quickdraw they don't really (yet) have the elements that would support an Imperial Aces style.

What the First Order has instead is... uh.  Their ships really reward being flown as... uh.

Ok, it's not clear.  It's really hard to put a First Order squad together that has a strong strategic goal and doesn't just look like a bunch of ships that happen to have turned up on the table at the same time.  That's not to say it's a bad faction, just that First Order lists tend to just play the game with little subtlety or overarching grand plan other than 'try and shoot them faster than they shoot us'.

One advantage that buying into First Order has is they tend to be quite self-sufficient for having the right upgrades in their expansion packs, especially in the TIE/fo expansion.  A budding Resistance player almost has to buy their Conversion Kit a First Order player can build a pretty good squad straight out the expansions.  And it's also true that because the First Order squads so often tend to look like a random collection of ships it means you can basically start out by buying a random selection of First Order expansions and it will probably add up to a working squad... 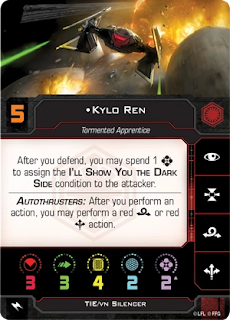 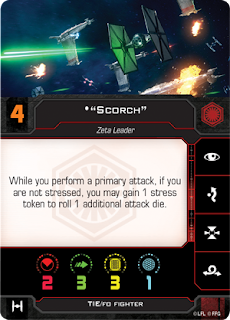 Because there's not really a clear way to build 'a good First Order squad' it means there's not many bad decisions to make when buying into the faction.  The only ship you really need to think carefully about is the Upsilon Shuttle which probably isn't worth the investment as you also have to buy the Conversion Kit just to put it onto the table.

DISCLAIMER: This advice is accurate at the time it's given.  Because X-Wing uses flexible point costs they could easily change and make a bad ship good or a good ship bad.  I can't predict that, I'm afraid, but this is the best advice we can give right now. 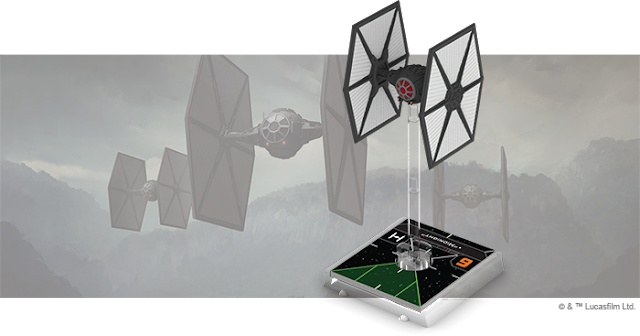 Although it doesn't sound like it would make much difference the extra shield that First Order TIE Fighters get does make a pretty big difference to how frequently they'll explode on you.  What doesn't chance, though, is that they're still not a particularly potent damage threat as they only have the same tiny laser cannons that the original TIEs had.  Imperial TIE Fighters tended to get over this limitation by running in sheer numbers alongside Howlrunner, while the First Order tends to see their TIEs more as nice filler ships than the basis of their entire squad.

It's almost always going to be worth picking up a couple of the basic TIE Fighters, though.  They tend to be important in finishing up squads when everything else is a bit too expensive and in characters like Scorch, Null and Lieutenant Rivas there are plenty of good pilot abillities to squeeze in.  Just as importantly the TIE/fo expansion pack includes both Fanatical and Advanced Optics upgrade cards, which you'll probably want for your other First Order ships. 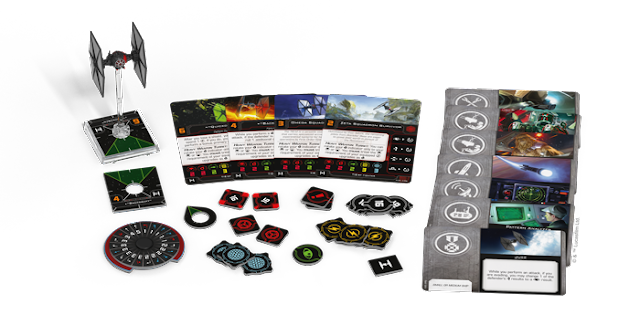 The Special Forces TIE Fighter (or TIE/sf) is the ship that Finn and Poe escape in at the start of The Force Awakens - the two-man variant with an optional rear gunner.  The TIE/sf combines the raw speed of a TIE Fighter with the durability of a T-65 X-Wing to create a decent, if unspectacular, all-rounder of ship.  In recent months the addition of Passive Sensors has given the TIE/sf a second lease of life as a potent long-range missile carrier and squads of five TIE/sfs have had a decent amount of success.  Just beware that assembling such a squad is going to stretch your wallet - those Passive Sensors only come from a couple of expansion packs! 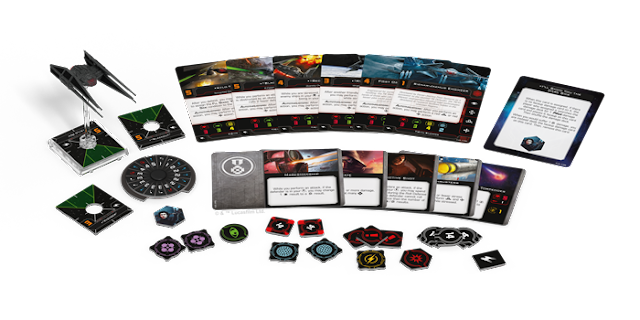 The TIE Silencer is the ship that Kylo Ren flies during The Last Jedi and it's for the elite of the First Order pilots.  As it's both very quick and very hard to kill the TIE Silencer is probably the most obviously beginner-friendly ships for a First Order player to start with and there's multiple strong pilots for the ship including Kylo Ren himself.  You'll likely need to buy some TIE/fo expansion packs to get the upgrades but the Fanatical/Advanced Optics loadout is a proven combination and you'll even see players fielding three TIE Silencers as their full squad. 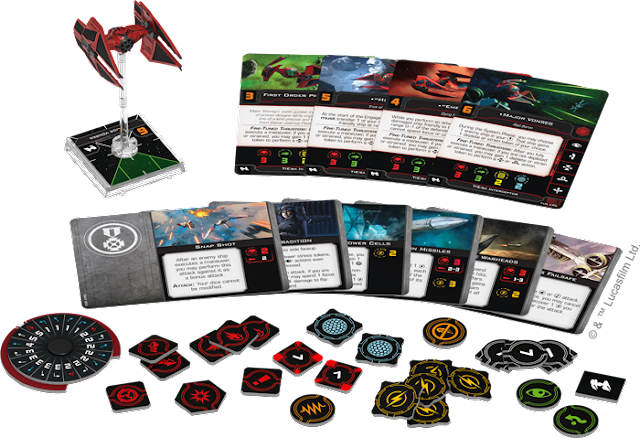 One of the themes of the First Order is that they don't really have any specialists - everyone is pretty good at a bunch of things rather than mastering one thing.  That looks set to change with the release of Major Vonreig's TIE Interceptor in Q1 2020 - this ship looks like the first pure ace pilot the First Order will have at their disposal.  Vonreig is likely to be a similar experience to Soontir Fel for the Imperials - a devastingly fast ace who will take expert flying to keep alive but who promises to punish any opponents who can't live with his extreme agility.  We'll know more closer to the release date but I think most First Order players have buying this expansion pencilled onto their 'to do' list.

===== THE FOLLOWING SHIPS ARE UNRELEASED IN SECOND EDITION =====

The mighty Upsilon Shuttle certainly casts an imposing shape on the table and as one of the few ships in the game with a natural 4-dice primary attack it's capable of withering fire on anything that strays in front of it.  Like the Empire's Lambda Shuttle the Upsilon is very slow and clumsy so keeping enemies in your firing arc can take a lot of forward planning.  You need to work hard to make sure that the fight happens where you want so you can position the Upsilon there ahead of time, especially as without the Lambda's rear arc gun the Upsilon Shuttle can easily overshoot the fight and take an age to turn back around.  There are some potent pilot abilities, and Lieutenant Tavson in particular can be a real pain to try and kill, but in a world of mix-n-match First Order squadbuilding the Upsilon Shuttle is the one ship that you need to plan long and hard for once you include it.
Posted by Stay On The Leader at 12:29