Well, we're all here together on the X-Wing equivalent of Christmas Eve and I've only got one of my Ten Squads in Ten Days left to share.

And I may just have saved the best until last.
All of the lists I've shared over the last nine days have had some good ideas behind them and they've all got a plan for how to approach the game and win.  Hopefully along the way I've managed to showcase some unexpected ships as well and offer up some food for thought for your own squadbuilding.  Parents aren't supposed to have favourites among their children but I have to admit that I believe in some of them more than others... and then sometimes you have the child that maybe you're kind of a bit afraid of.

I don't know if any of my Ten Squads in Ten Days are going to be among the ones that set where the competitive bar rests in early Second Edition play.  I know I like most of them and that I like a few of them A LOT.  But if any of them are then it's going to be 'the best squad in 2.0' then my money would be on this one, and it all started out with a very simple idea...

About ten minutes later I had this, and it's never changed since.

If you're looking at this and thinking 'I don't get it' then allow me run down some of the applications key features...

The image that most readily comes to mind when I think of what this squad represents is Auntie from Mad Max: Beyond Thunderdome leading her army of scavengers on a rampage across the post-apocalyptic outback, with Drea Renthal obviously in the Tina Turner role. 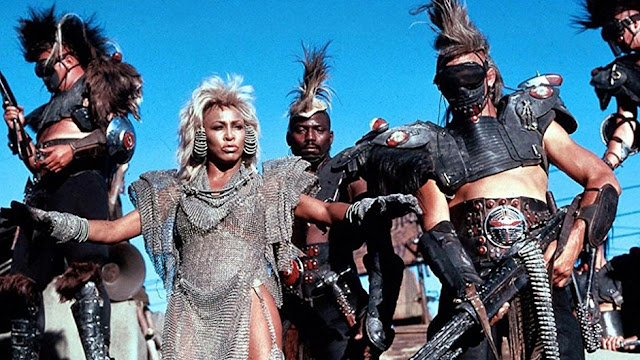 Who wouldn't want to fly these guys?

Confession: I've not actually played the Jakku Swarm yet because I'm kind of scared of what I'll find.  Either it will not live up to what it looks like on paper, which will be disappointing, or worse yet it WILL live up to its promise and that'll be terrifying.  I do know people who have given it a try, though, and the feedback they've given to me on how those games went sound a bit like the X-Wing equivalent of Vader's corridor scene in Rogue One.

TIE Swarms are being talked about as the competitive touchstone of the new 2nd Edition metagame because of their raw firepower and jousting efficiency, but with 90% more hitpoints this squad leaves the TIEs in the dust.  People talk about TIE Swarms being hard to fly and easy to outmaneuver because they have to stay in tight formation to benefit from Howlrunner, but this squad doesn't have any such requirement.  People are bringing Proton Bombs as their preferred answer to the TIE Swarms that fly in tight formation without any shields, but this swarm doesn't fly in formation and has shields on 5 out of 7 ships.  And tractor beams.  Tractor beams to disrupt enemy formations, to throw people onto rocks (and in bullseye arcs, even Medium ships onto rocks) and make the opponent fear rocks as a defense against the swarm instead of running towards them. 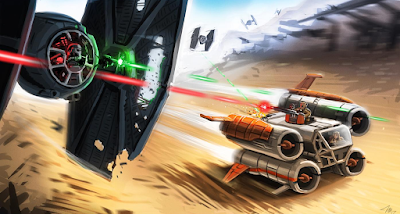 This is a very scary proposition.  Yes, that's right, Quadjumpers are scary now... the post-apocalyptic future is a strange place.

The one thing this squad really gives up on vs the TIE Swarm is a bit of speed.  A TIE has a 5 forward and a white barrel roll so, in the immortal words of Poe Dameron "it can really move".  A Z-95 has a 4 forward and a red barrel roll so it's more limited (although, hey, a Z-95 has a barrel roll?  that's awesome!).  Worse yet, the Quadjumper's fastest move is a 3 so the Jakku swarm has to be more methodical in chasing targets down than the TIEs are.  This lack of speed means the Jakku swarm doesn't get a completely clean sweep of ticks against the TIE Swarm and it has a new weakness to expose, but on balance I still think it's well ahead of the TIEs - not least in having a lot of natural strengths against the things that people are bringing to kill TIE Swarms, like Proton Bombs.

I haven't put the Scum Swarm onto the table yet but I will, when I'm done tinkering around with all the new kit and want to start properly trying to win games this is likely to be my first stop.

And that's it for my Ten Squads in Ten Days.  I hope you've enjoyed them and that I've been able to show you some new ideas for how to get set up in this Second Edition of X-Wing.  This time tomorrow I won't be posting another blog but will, in a refreshing change of pace, be setting a dial and trying to play as much X-Wing as humanly possible.