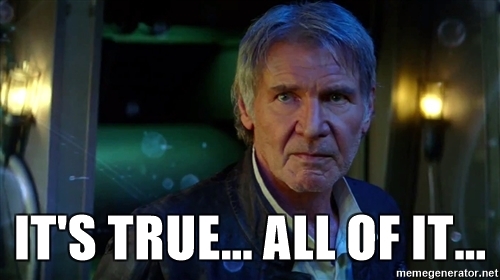 The new and long-rumoured FAQ is here (I've been holding off updating my Scum Buying Guide since June, because I was sure it was imminent at any point).  You can read the full FAQ here..
https://www.fantasyflightgames.com/en/news/2017/10/25/new-squadron-formations/

In among the usual batch of rules clarifications there are five major pieces of errata that seek to rein in some of the most dominant pilots and squads in the metagame.  So let's have a look at what those are and how they might impact things going forward.

The major impact of this nerf is that you can't use your post-SLAM action to drop a bomb, and that hits K-Wings pretty hard.  Warden Squadron lists had gone anyway but this means they won't be back, but Miranda has been a major part of the metagame all year.  Missile-toting Miranda is fine.  Bomblet Generator Miranda is fine.  Clusters/Conners Miranda may be able to work with Experimental Interface to still bomb post-SLAM at the cost of a stress token. 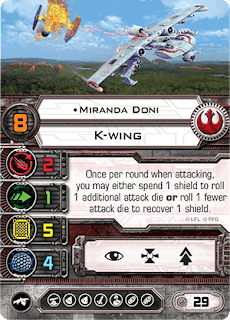 Firstly, Miranda doesn't like to be stressed - her dial doesn't have much green on it and she's a bit of a sitting duck while she destressrs.

Secondly, though, I have to believe that the benefits of the perfect Cluster Bomb run are worth that stress token.  For me the single biggest question after this FAQ is how much it actually takes Miranda's precision bombing out of the game.  I think she can ride it out with a loadout like this...

Plenty of other people seem to think that Miranda is dead, so maybe I'm wrong.  We'll see, though, and it seems to me like she retains 90% of her existing functionality.  Historically several strong lists and pilots have found ways to shake off a lot of nerfs that don't utterly nail them.

Speaking of nerfs that utterly nail them... wowsers.  The Genius nerf comes in two parts: you can't bomb token if you bumped, and you have to discard the bomb upgrade to do so.

But you have to discard a bomb upgrade anyway, right?  What's the big deal?

You didn't have to discard Bomblet Generator to use Genius.  Now you do.  That's a huge crimp on the existing Nym builds, especially the Scum one which loved to just bash into opponents and drop bombs anyway then ignore the damage.  Captain Nym is resourceful and will return in new ways I'm sure, but the Genius/Bomblet combo was sickening and it's been very heavily nerfed.  Hurrah!

Restricting Attani Mindlink to just two ships is a ~50% power reduction in most cases.  A three-ship list would get 2 bonus focus tokens, now it only gets 1 bonus focus token.  It's a big hit, even if it is flavourful (in the lore a Mindlink is a unique two-person bond). 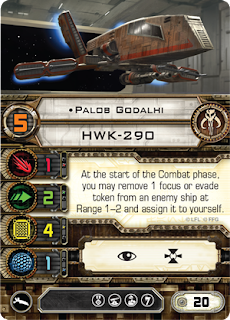 We've come a long way from my first 'is Mindlink the next big thing?' blog to it getting a massive nerf and of all the nerfs on the list this is the one that makes me sad.  I'm so glad that the competitive applications of Mindlink are gone, because without a doubt it was too good, but I'm sad that it won't be available to help otherwise interesting but ineffective Scum builds get onto the table.

I'll be fine with house-ruling this errata away in non-tournament games if my opponent wants to bring some janky Mindlink scum to the table.

Is Mindlink completely unplayable in competition now?  No, I don't think so and especially on ships like Guri and Palob who can get their focus token without using an action.  I can still see lists where you Mindlink two of the three ships, but you'll usually want those to be tough ships so the Mindlink benefit isn't broken as soon as your weakest ship goes down.

You can even almost still run Palobtanni with Palob and Asajj Mindlinked and PTL on Fenn (it's 101 pts with TLT on Palob).  I think we'll find that there is still a place for getting a free focus token for just a 1pt EPT, but no doubt we'll see it a lot less often.

Finally... if you're a scum player and down in the dumps about the Mindlink nerf then allow me try to shine a ray of sunshine on your day.  One thing Mindlink definitely did do was limit Scum squadbuilding options.  The benefits of Mindlink were so strong that it locked you into playing three Scum ships with EPT slots and decent dials, and that meant that a load of Scum pilots and ships were left sitting permanently on the shelf.  Because you were Mindlinking your whole squad there wasn't even room for them to sneak in as your third ship for a bit of variation, they just basically ceased to exist as options.

Restricting Mindlink to two ships gives you back the license to play whatever you want as the third ship, and just in time for Thweek to arrive in Guns For Hire!

No Torpedoes.  No Astromechs.  Wow. 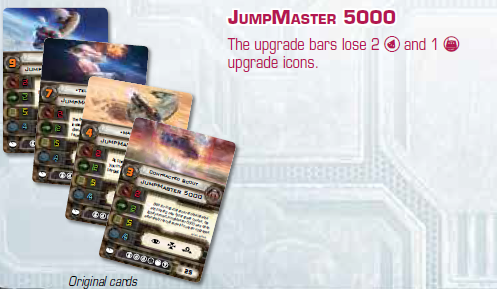 FFG have never ripped icons off the upgrade bar of a ship before, but never has it been more deserved.  After 18 months of squatting over the game in one form or other it's time to give people a break from Jumpmasters for a bit.

Are they basically dead in all forms?  Manaroo and Tel Trevura are done, I think.  Dengars pilot ability is still very good, though, and with Punishing one and the like Expertise and K4 Security Droid he can still deal damage.  I think Dengar really feels the loss of the astromech slot more than the other pilots do, as throughout his career Dengar has always leaned on his trusty droids to help him out, but it R5-P11, Unhinged Astromech, or Overlocked R4.  Rumour was that the Punishing One title would be errated to give him that astromech back and if that happens in the future then I think Dengar can be a real force, but until then he actually feels (whisper it) a bit overcosted. 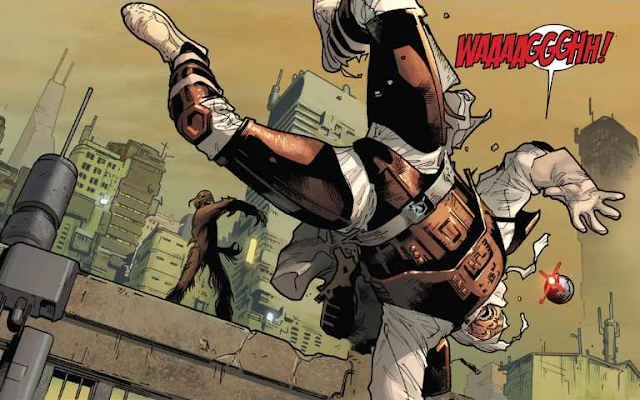 Clearly NOT overcosted, though, is the Contracted Scout.  The Scout has lost the torpedo threat and it's lost the Attani Mindlink and R4 Agromech action economy, but you still undeniably get a lot for your 25pts when you buy a Contracted Scout.  With Intel Agent aboard it's still the premiere blocker in the game, and with Rigged Cargo Chute and Cad Bane it has the unique ability to 'sloop & poop' bombs and garbage out onto unsuspecting opponents.  Look out for crafty Scum players bringing a Contracted Scout as their third ship.

DING DONG, THE BIGGS IS DEAD, THE WICKED BIGGS OF THE REBS IS DEAD! 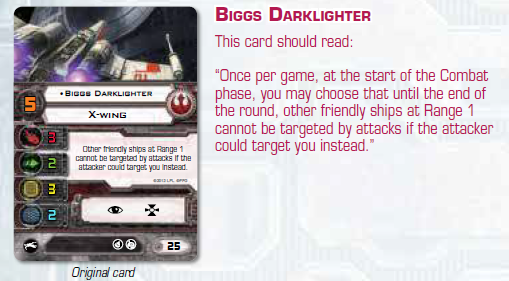 It felt like this could be coming.  When Lowhhrick arrived with Selflessness he felt to me like a Biggs replacement rather than a Biggs complement.  If I had to stick $100 down on a theory I'd suggest the playtesters had said you couldn't have Lowhhrick and Biggs in the game at the same time but the developers said 'we'll wait and see what happens'.  If that's the case then it's not really any coincidence that Paul Heaver jumped on the list at the first opportunity and made sure the Biggs/Lowhhrick combination was jammed down FFG's throat in a way they couldn't ignore. 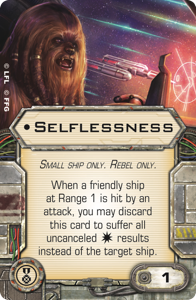 Biggs goes from being a permanent shield over his team to having effectively a one-time 'Super-Selflessness' effect that protects his team for the duration of a combat phase.

There's three things to say about this change, I think.  Firstly this is a MASSIVE downgrade in what Biggs does.  Squads that previously spent the whole game trying to keep Biggs alive and hide behind his green dice (like Kanan Biggs) just don't function any more.  Biggs is going to take a massive hit in how much he gets played.

Secondly, he's still actually not that bad for 25pts.  A one-shot super-Selflessness is still a very good ability, especially in a squad that also has other damage redirection effects like Draw Their Fire, Lowhhrick, Rex, or actual Selflessness.  In short... I think a squad like Fair Ship Rebels is still actually pretty decent, and may even get slightly better in the metagame if the bombers are dropping out a bit.  Don't go ceremoniously shredding your Biggs Darklighter pilot cards just yet.

Thirdly, for the first time it really matters that Biggs is in a T-65 X-Wing.  His ability isn't going to carry him through the game s he just hugs his teammates close - he's going to have to sweat that dial and make his X-Wing deal some damage.  That also means this nerf might finally have opened up the chance for a proper X-Wing buff.  There's a missing SKU that we don't know about in the production run... we've had Force Awakens Han and Chewie to refresh the Millenium Falcon, maybe a release of The Last Jedi version of Luke Skywalker will refresh the T-65?  It's a hope.