These are the Meta-Wing ranking tables for the calendar month of September 2017, which has included the results of several major National Championships.

If you don't know what Meta-Wing is then please read my blog introducing it here.

It's worth repeating some of the provisos about Meta-Wing, just to head off some of the people who get cranky about this sort of thing.

The Concord Dawn/Attani Mindlink connection is finally done.  Fenn/Teroch/Inaldra all take big drops in the pilots chart, while Paratanni & Sick Fang Man drop out of the top squads.  The Protectorate Starfighter has been a solid fixture at the top of the ship rankings as the only 'ace' really able to hold its own in the bombs meta, but this month it plummets from being #1 ship in August to the #12 spot!

The meta drifts slightly more towards Rebel dominance.  Rebel Nym is now ranked ahead of Scum Nym, and the big growth in squads is coming in Miranda/Dash/Nym combinations, while Poe's brief moment in the sun appears to be over. 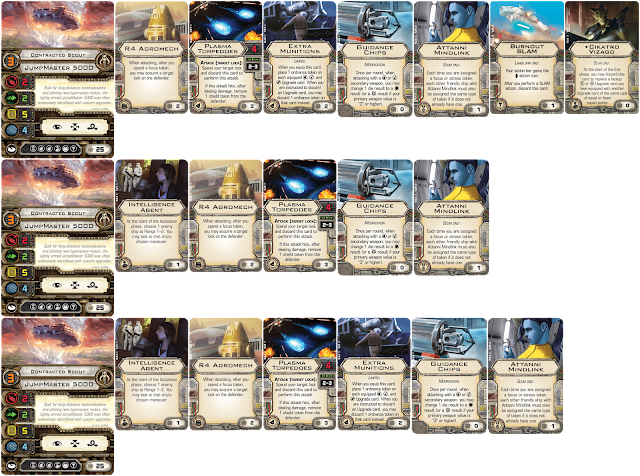 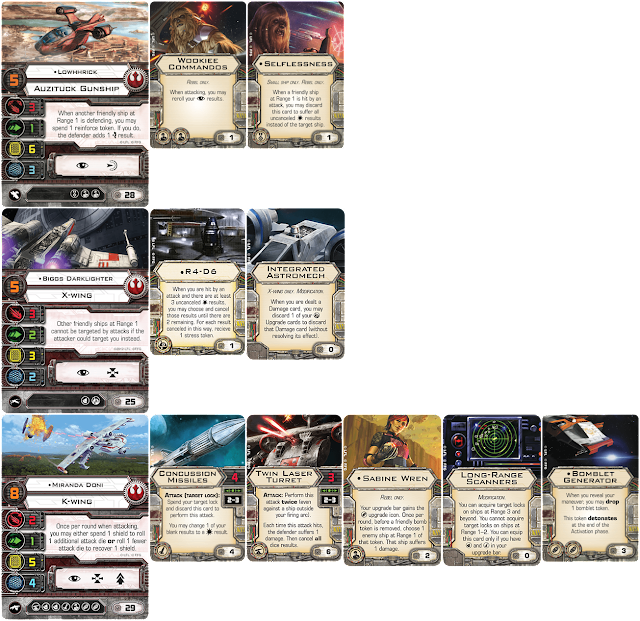 OP Cubed is an important squad to discuss in more depth as it's an interesting hybrid of Fair Ship Rebels and Nymranda, replacing Jess Pava and Captain Rex with the durable Miranda threat.

Given the rise of arc-dodging turrets this seems a pretty strong move as the damage output from Jess and Rex is a lot less reliable that you can keep them on-arc of their target.  Another thing that occurs to me about OP Cubed is how much it reminds me of Paul Heaver's list that he used to win the Naboo Open earlier this year, which was Miranda/Biggs/Stressbot.  The structure then was that you had to deal with the Stressbot and Biggs then had Miranda waiting for you in the endgame, and OP Cubed is very similar except that it's Biggs & Lowhhrick you need to deal with before you get to your boss battle against the K-Wing. 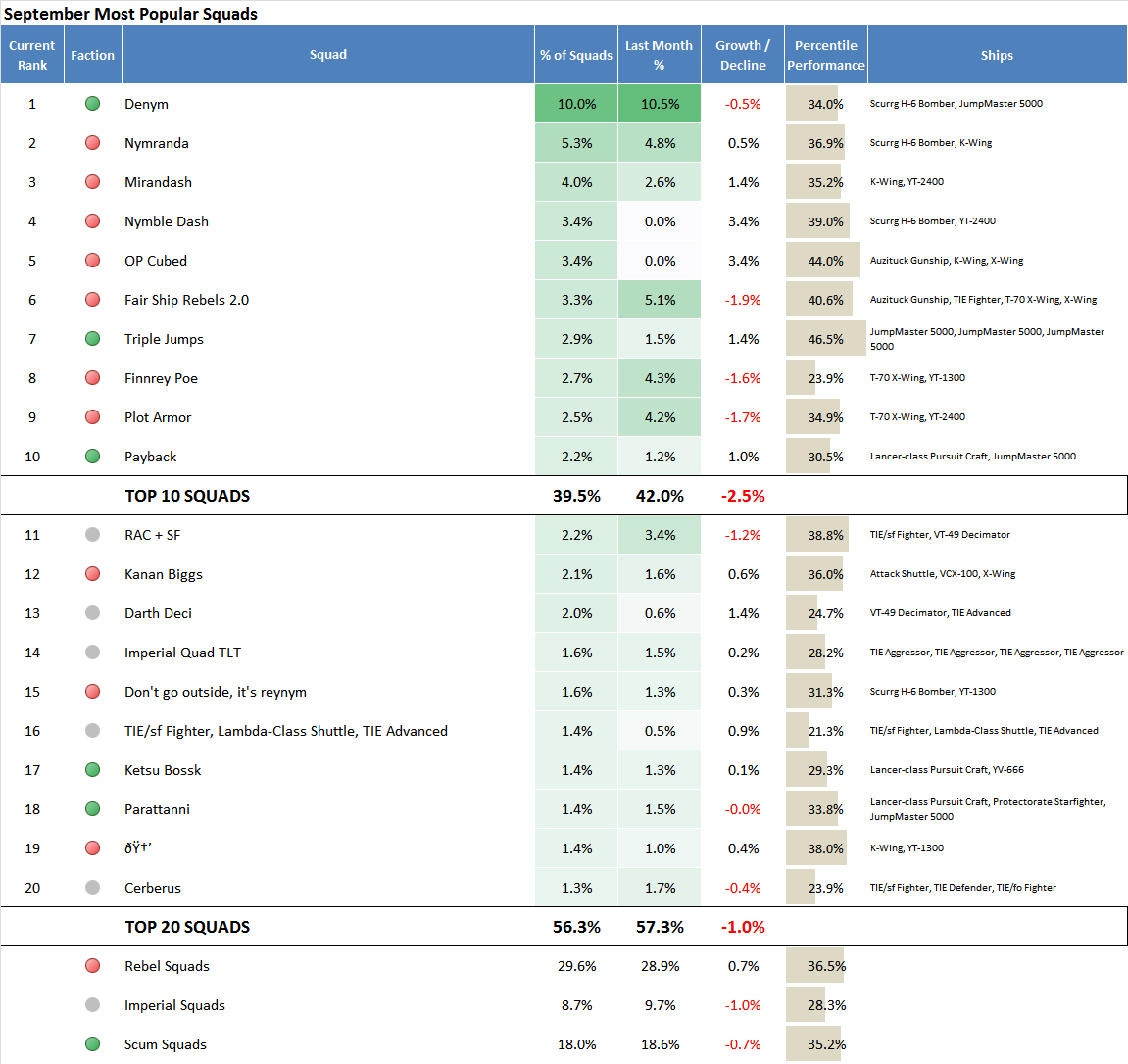 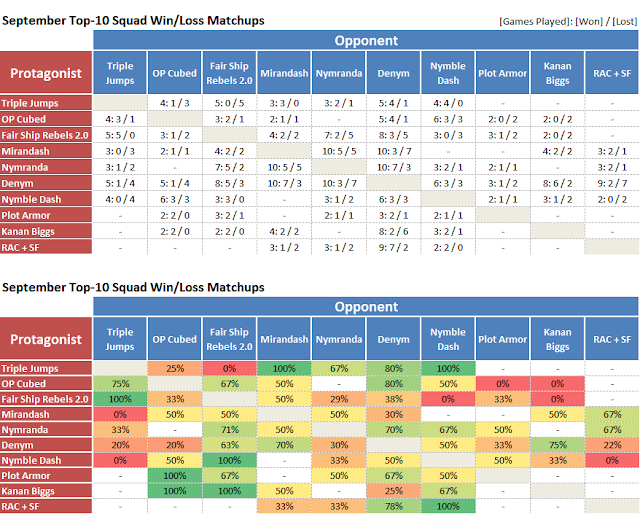 The comparison of specific matchups is a lot sketchier because that information isn't always stored in Listjuggler, so from 100+ examples of players using Denym you only get a handful of specific 'Denym vs Mirandash' results, for instance.  So keep a punch of salt on hand for some of this. 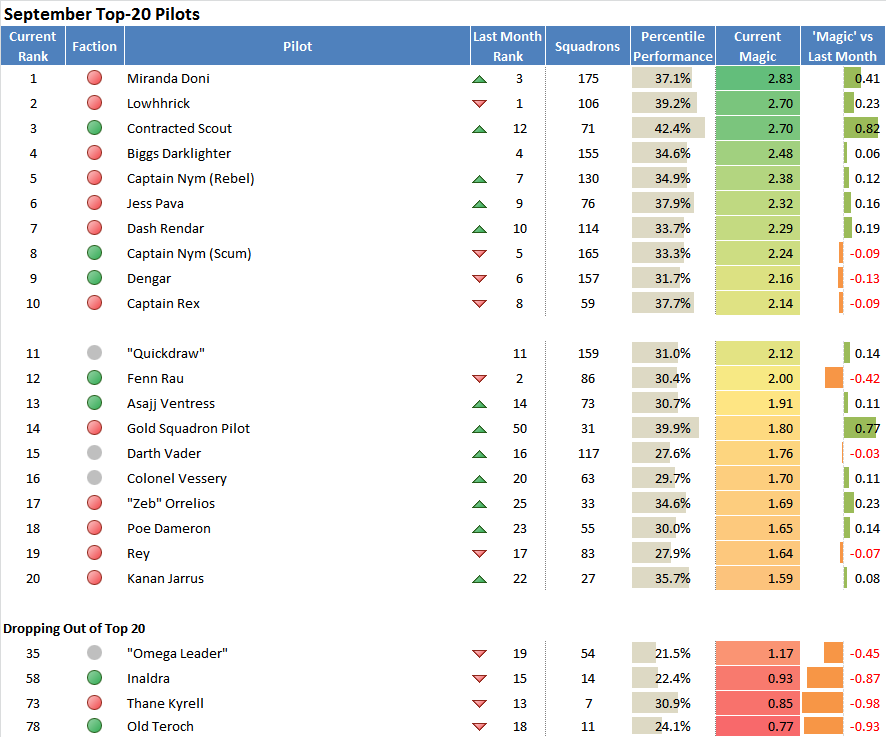 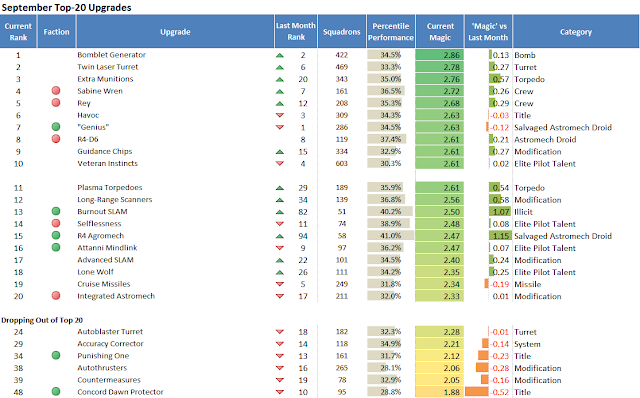 Half of the top 20 upgrades are dedicated to secondary weapons, either the weapons themselves (Bomblet Generator, Twin Laser Turret, Plasma Torpedoes) or to making them work (Sabine Wren, Guidance Chips, Advanced SLAM).

There's two things here that I want to give a particular call out to: 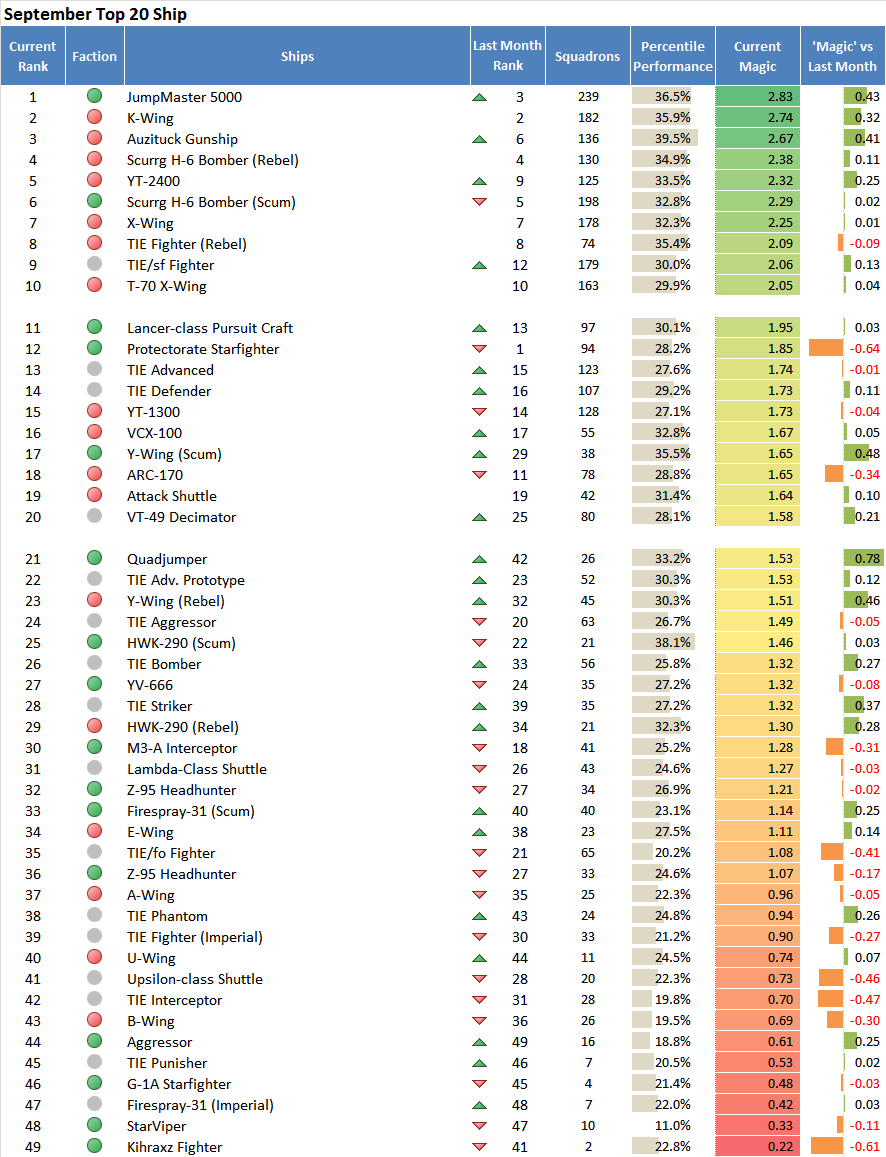 Finally, the full ships power level breakdown suggests that Guns For Hire can't bring buffs fast enough for the KIhraxz or Starviper!  Languishing down at the bottom of the tables Scum ace pilots have to hope that there's some serious power boosts in Guns For Hire, or all they'll succeed in doing is being pushed up into the mid-table.  That's what happened to the TIE Bomber when Imperial Veterans landed, and it remains to be seen if the likes of Thweek are more like Countess Ryad or Deathfire in power level.