"Are we blind? Deploy the garrison!" - Escalating Murder H's

“…Sienar System's basic TIE fighter—a commodity which, after hydrogen and stupidity, was the most plentiful in the galaxy…”
― Corran Horn

I've been playing X-Wing for close on two years now (my first games came in the Christmas-New Years break in 2015) and yet for all that time it turns out that this past weekend was the first time that I've ever played anything other than the standard "100/6" (100pts, 6 asteroids) Deathmatch format.

I found out at quite short notice that my local store was having an Escalation tournament, and managed to quickly rank up enough Good Husband Points to be able to attend.  That gave me about 48 hours to work out an Escalation list!

For those unfamiliar, the rules of an Escalation Tournament are as follows:

Having never even paid attention to an Escalation event before I was going to have to get up to speed pretty quickly.


The trouble with the Scum route was that I thought a load of people would be taking it, and anyway I didn't want to fly those guys.  On to the next faction...

Whichever route I chose it felt like the Escalation format was forcing me to take some suboptimal Imperial choices just to match the 30pt steps, so I moved on to Rebels... 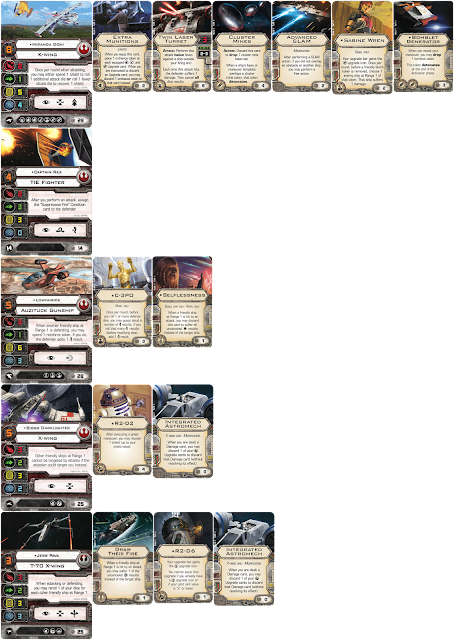 That was... that was just evil.  If I took that to a presumably pretty casual Escalation event I'd probably win it, but I wouldn't be having much fun doing so and I sure wouldn't be making many friends.

I couldn't bring myself to do it.

With time running out I want back to the drawing board... what did I want to fly?  I wanted to fly TIE Fighters.  Ok then, let's fly some TIE Fighters...

I really liked my opening round at 60pts, that was very strong with Omega Leader and a very dangerous Quickdraw.  I expected a lot of players to have some weak first rounds by bringing in some near-naked ships they wanted to upgrade with the second set of points in the second round, and I planned on taking advantage of that with a strong first squad.  The second round was probably my weakest, though, as I brought in Howlrunner and an Academy Pilot but didn't really have the numbers to take full advantage of her rerolls.

The third and fourth rounds just ramped up my jousting firepower and Howlrunner value, and the objective would be to try and brawl my way through and deliver Omega Leader into the endgame.  If I could get lucky in my second round I felt like I could have a chance.

Time to put that theory to the test.

ROUND ONE vs Rob (Mindlinked Asajj & Inaldra)

This had worked out quite well for me.  Rob was probably my toughest opponent in the room so meeting him in my strong first round, when his Mindlink squad was just getting going, was perfect timing.

But no, wait!  For reasons known only to himself the store owner had been sitting and chatting with two more X-Wing players instead of sending them over to the tournament, so seconds after revealing our first dials it was announced that the tournament was going to restart with the extra players in.  Curses, my favourable matchup against Rob disappeared up in smoke... 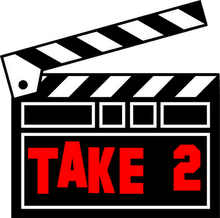 ROUND ONE vs Marcus (Ryad & Omega Leader)

It turned out that my initial suspicion that a lot of people would take Scum in Escalation was well-founded, and in fact Marcus and myself were the only players who WEREN'T running Scum & Villainy squads.

I deployed Omega Leader up in an apparent joust with both Marcus' pilots then flanked with Quickdraw.  My plan of a 3 bank into the table then a 4-forwards Cruise Missile shot worked perfectly and Marcus' Omega Leader walked straight into it - target locking my own Omega then eating a Cruise Missile coming in from his side.  His TIE/fo limped away from that strike and died the next turn, leaving me two-on-one against Ryad's tanky /x7 TIE Defender. 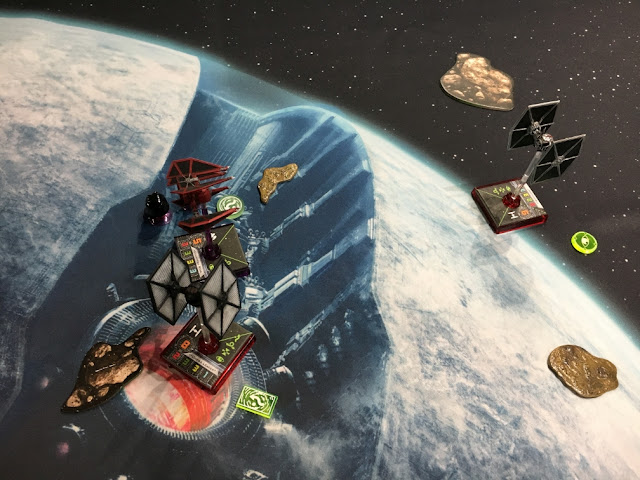 A couple of good calls from Marcus saw Ryad keep pressure on my Omega Leader as I tried to disengage to restack his Evade and Target Locks, and I was lucky to finally escape around an asteroid.  Once I had escaped though, Omega Leader and Quickdraw soon swung back around with Ryad's predictable moves in their sights, and I finally took the win.

The perfect timing of facing Rob when my squad was strongest had been flipped on its head and now I was facing him in my weakest round, when he had enjoyed a massive power boost by adding Fenn Rau!  This was perhaps Rob's strongest round because he wasn't far off the power level of a full Paratanni squad, just with Inaldra instead of Manaroo playing the role of the cowardly focus-stacker who sits at the back. 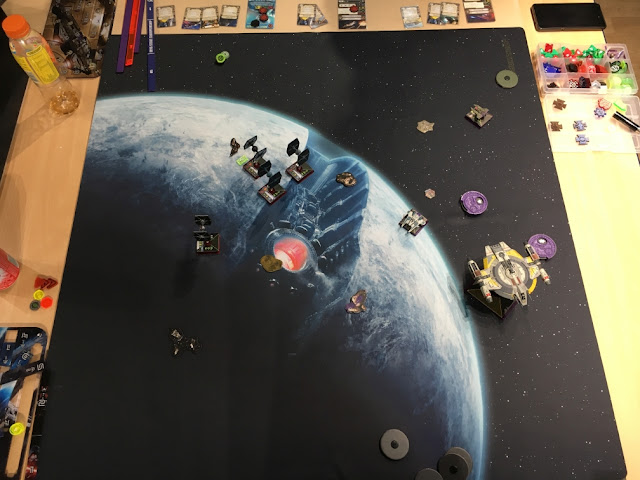 We deployed in opposite corners and I threatened to hare across the diagonal lane to hunt Inaldra.  This is where I think Rob made his big mistake and pushed Asajj too far forwards down the flank.  We've all been put into a tough spot by Asajj as she circles around the outside of the fight, but where Rob had taken her meant he had a tough choice to make - either continue to head round the flank but have to fly around the outside of the asteroid field and not contribute to the fight, or cut inside but be going head-on into the fight.

Rob cut inside and I made Asajj pay for that decision.  The first round of firing Omega Leader chipped away at Fenn, then on the second turn I bumped Asajj and laid into her with everything I had.  Some rotten green dice on Rob's part mean Asajj took a real beating and ran away with just 1 hull remaining, her arc facing the wrong direction and unable to move it due to both a Weapons Failure and a Damaged Sensor Array.

I spent a couple of turns failing to trap Fenn Rau before killing Asajj when she finally looped back around into the fight to finally take control of the game. 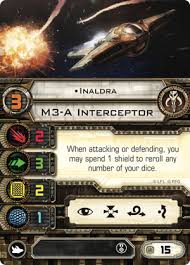 Uh-oh, I spoke too soon.  Over two turns I lost three of my ships as killing Asajj had let Fenn and Inaldra slip in behind me.  Now it was Quickdraw alone against Inaldra and the wounded Fenn Rau.  I slooped away from Fenn and fed him my Cruise Missile shot... that finished the Mandalorian off but Fenn stripped away Quickdraw's shields in return, then Inaldra chipped in another point of damage!

This was touch and go.  Two hull left on Quickdraw against an undamaged Inaldra.  One mistake and I could be wiped away.  It was going to be a knife-edge finish.

But I didn't make a mistake, and switching between rear arc and front guns made my flying unpredictable enough that I was able to shake Inaldra off my tail then spin round and deliver the final kill shot of a game that had swung back and forth throughout!

That was two rounds played, and they'd both been some of my most enjoyable X-Wing I'd ever played!

The 60pts round is a lot like cutting straight to endgame, with predicting your opponent's moves while being unpredictable in your own moves being hugely important.  The duel against Rob had been one of the most back-and-forth games I've ever had, from assuming I was going to lose to getting great dice and forcing Asajj out of the game, to suddenly being left with Quickdraw as my only ship and then duelling it out against Inaldra.  It was a game I'd won with a big sigh of relief!

After sweating bullets to win my second round match this one turned out to be a pretty routine win.  Adding my first two Black Squadron Pilots gave me the firepower to dominate a heads-up joust against David's Scum squad, removing one of his Slavers before it could fire then ripping into the second one after I k-turned behind him.

David threw me a curveball when his Spacetug Tractor Array meant Omega Leader flew onto a rock and the Cartel Marauder tried to pounce, but the rest of my TIEs rode to Omega's rescue and destroyed the Kihraxz.  The Quadjumper went on the next turn and the final Slaver was left with the full might of the Imperial fleet sitting in his rear-view mirror.

I have to trust the TO's tale that Cryodex threw up a bit of a fit and gave Marcus and myself duplicate pairings for the final round.  It could be because Escalation rules meant we were playing an additional round of Swiss over what was required for the number of players, but whatever the reason I would be spending my final round up against the complete aces loadout of my first opponent.

Marcus' list really illustrated why I'd avoided the aces, because in packing in five big names to his list he'd had to make some big compromises in loadout.  Omega Leader was standard, Ryad now had Push The Limit, and Carnor Jax was pretty typical with PTL and Autothrusters but the others two were a bit more unusual.  Marcus was running Tomax Bren as a support ship with Fleet Officer and Cool Hand (so he handed out Focus tokens with Fleet Officer then gained an Evade thanks to the stress) and Inquisitor was loaded as a piledriver with Swarm Leader.

Marcus' squad may have been unconventional but I was nervous of jousting against so much firepower at a higher PS, and when we deployed in opposite corners and began an approach across the centre of the table my plan was to hang back just out of range then try and dash forwards to create blocks and disrupt all Marcus' action economy.  He was flying Ryad as his leading edge but then brought Inquisitor and Omega Leader up alongside... I'd misjudged my distance with the poor Academy Pilot and he got annihilated by The Inquisitor's 5-dice Swarm Leader attack, then I put the hammer down and we closed for the joust proper.

All I needed from this turn was to have most of my ships on the table when it came to my turn to fire, and with a little bit of fortune Marcus' dice turned cold at the right time and all but one my ships escaped unscathed, while we took out the big threat of The Inquisitor's Swarm Leader!

That was the bit of luck I needed, and now I was able to k-turn half my forces behind Marcus' aces while blocking them up as they tried to maneuver away from my swarm.  Two turns later and somehow I had all my ships positioned behind all his ships, guns blazing as the aces frantically tried to evade the swarm of TIE Fighters.

The one downside was that I'd managed to put damage on pretty much all of Marcus' ships but only the Inquisitor had actually died, then just as it looked like a window was opening up for Marcus to steal back onto the offensive it was over, with Carnor Jax, Tomax Bren and Countess Ryad all landing right in my gun sights and dying on the same turn. 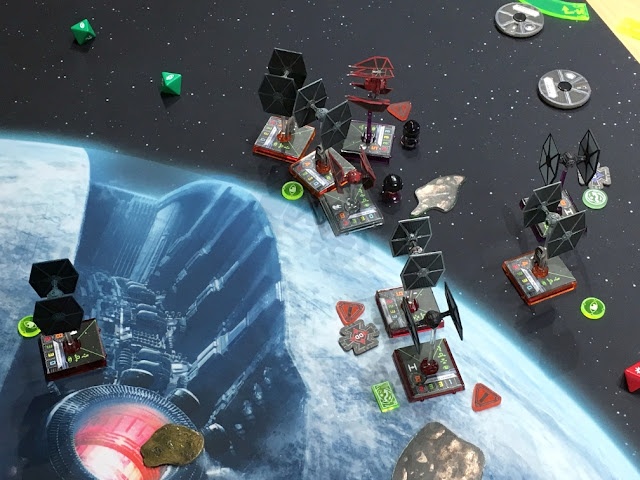 It was all over.

Four rounds, four wins, and it felt awesome to get the classic TIE Fighters onto the table - I'd genuinely forgotten how much I enjoyed their flimsy charms!  Real men don't need to bring more than 3 Hull and a change of underwear to a battle... 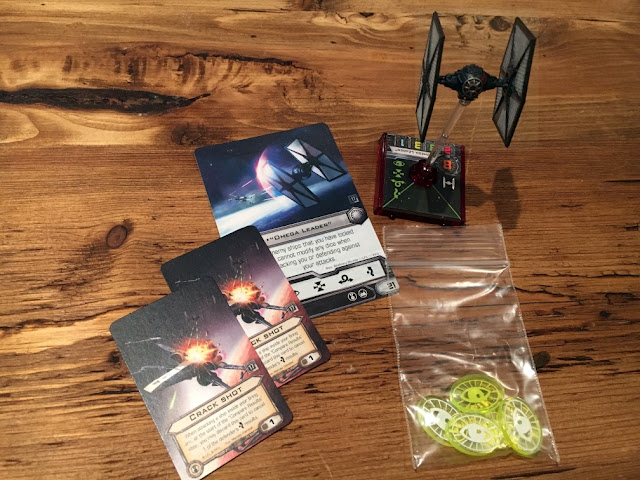 Thanks to everyone who took part, it was a really enjoyable day and maybe I should be playing some more X-Wing that's not so slavish to the 100/6 in future?