"Didn't we just leave this party?" - Is There Life After Nerf?

In an oddly perverse way the nerfs to several major cards in FAQ 4.40 have actually led to me using those cards a lot more since the FAQ came out.  I guess I must just like batting for the underdog team, or be a sucker for punishment or something.  Anyway, because so many people are bemoaning the loss of their favourite ships or upgrades or squads I wanted to take a minute to share some of the squads I've been pootling around with.

I'm sure that in most cases (maybe not for "Genius") there is life after nerf!

The Punishing One expansion pack took a double-whammy of a nerf in the recent FAQ, with both Attani Mindlink and the Jumpmaster 5000 itself catching a swing of the nerf bat.  When I came to update my scum buying guide I was still quite positive about both the ship and the Mindlink, though, and this squad is a good example of why that is... 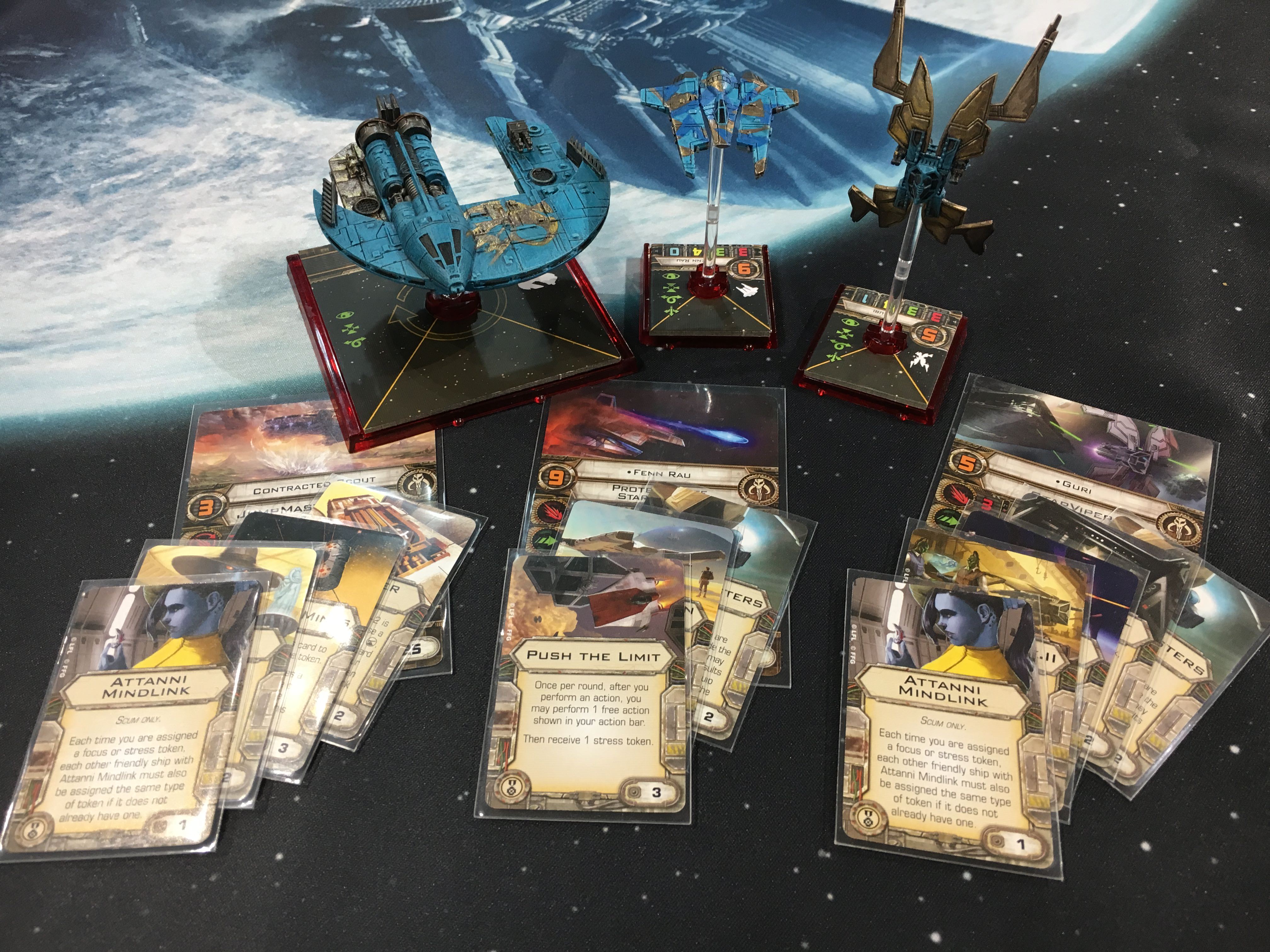 When Attani Mindlink got reduced to only being on two ships in the your squad it took a big hit in efficiency - just one 'bonus' Focus token instead of two.  However there's still some good reasons to take Mindlink, I think.


Those are advantages that are still quite unique to Mindlink, although you also need to keep on eye on the ships you're Mindlinking because if one of them is a weak link it could be destroyed quickly and you lose the benefit of the link. In this squad I'm putting almost all of those benefits in one place when I pair Guri with the Contracted Scout. 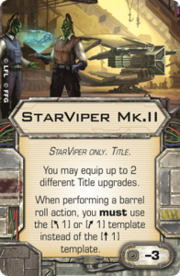 Guri can get me a focus without taking an action.  Guri would also like to have two Focus tokens as she lives on her green dice.  Both Guri and the Scout have other actions they'd like to do - with Mindlink, her ability and Fire Control System it means Guri is free to maximise the benefit of the new StarViper MkII barrel rolls, and the Contracted Scout wants to be dropping his Proximity Mines or barrel-rolling to block opponents.  And finally Guri is already resistant to being bumped thanks to her ability, but Mindlink doubles down on that and helps protect the Scout too!

As well as Attani Mindlink the squad also showcases that the Jumpmaster 5000 has a life away from torpedoes and astromechs.  I'm using the unique white s-loop of the Scout to threaten large areas of the table with Proximity Mines, looking for bumps on enemy ships, and providing a solid body and turret for low cost.

Jumpmasters and Attani Mindlink both took serious nerfs, but they're both still good enough to deserve time on the table!

Sideways to the above squad, there was a brief discussion on the FFG forums about whether a classic Paratanni squad could survives the nerfs too!  At first glance this seems very ambitious as Paratanni was really the high point for showcasing the outrageous benefits of Mindlinking three ships, so how could it work with only two Mindlinks?

And yet when you think about it there's definitely reasons to think that it could.  The Jumpmaster in Paratanni always ran lean so losing the Torpedo and Astromech slots doesn't really hurt it, and both Fenn Rau and Asajj Ventress are in ships with great green maneuevers on their dial that can easily switch to Push The Limit.  The only real question is who you leave out of the Mindlink because there's pros/cons for all of them.


There's probably not a wrong answer and within a ten minute window we managed to talk ourselves in and out of each one.  We ended up in the position of adding Manaroo back into the squad while Mindlinking Fenn & Asajj to each other. 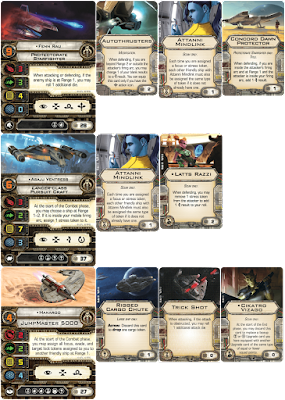 The advantage of Manaroo is that that she can use her pilot ability to kick-start the Mindlink even if she's not Mindlinked herself, so in the worst-case scenario or both your other ships being unable to Focus then Manaroo might be able to ride to the rescue of her teammates anyway!

It's definitely not as powerful as the original Paratanni - the reason it's such a hard choice who to leave out of the Mindlink is because the correct answer is 'all three, thanks!' - but it still seems playable, and once again demonstrates that you can make the nerfed ships work if you really want to. 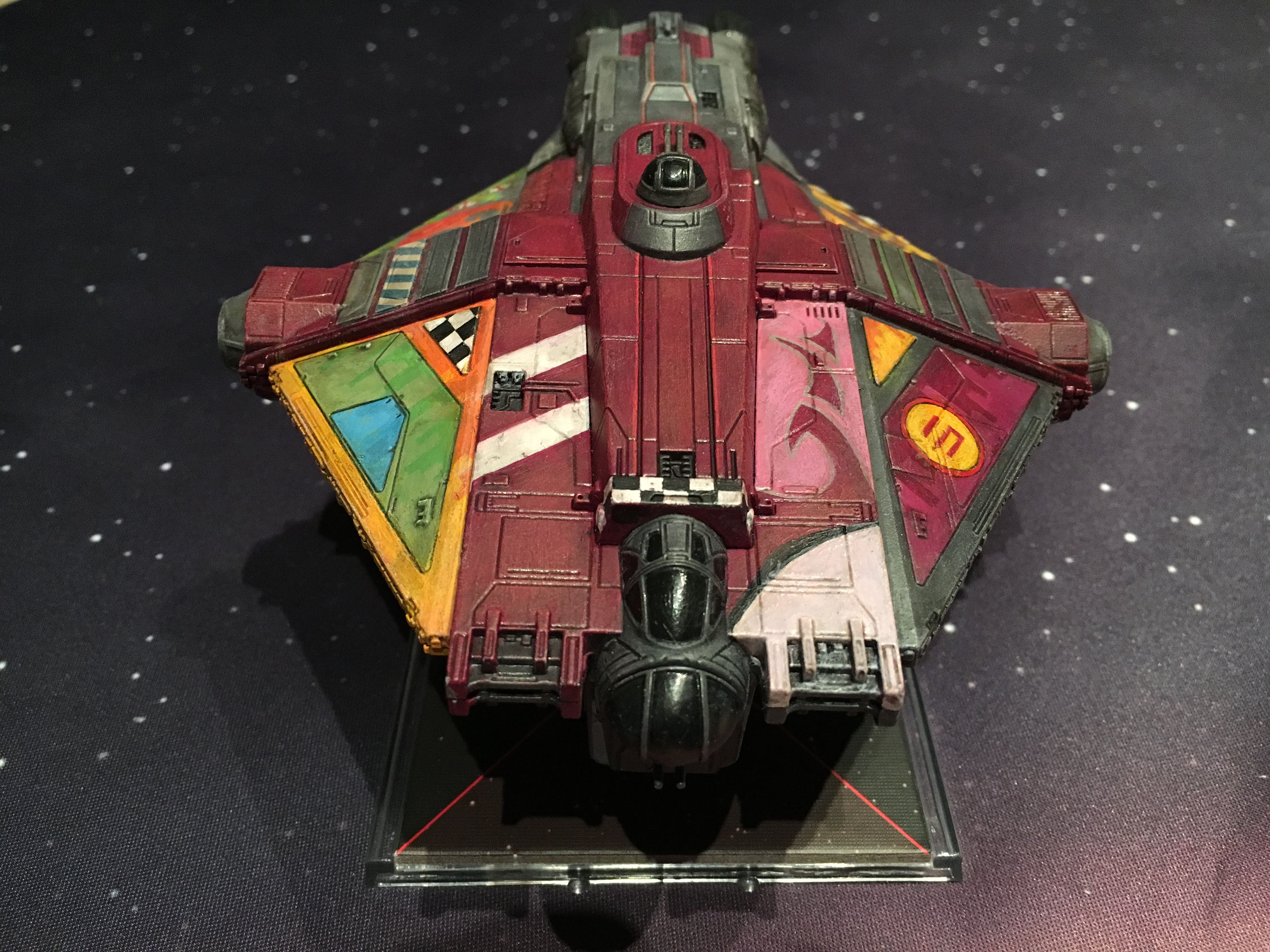 You may remember my recent efforts to jump onto playing fat turrets and bombs, which ultimately led me to playing a Lothal Rebel with Sabine Wren on board at Nationals.

I've continued to really enjoy flying this ship and have just been searching for the best wingman to pair Sabine with.  At nationals I flew Captain Nym, but flew him very badly and got badly burned so I've been a bit reluctant to return to Nym.  I went out and bought a second VCX-100 and paired Sabine with Kanan Jarrus for a while... it worked pretty well and I won more games than I lost, but I really felt like two VCX-100 just limited my maneuvering a bit too much.

The nerf to Advanced SLAM came just at the point that I was about to give Miranda Doni a try, but undeterred I put on my best Experimental Interface face and decided to plough on regardless.

I've only played a couple of games but it immediately felt like Miranda was the perfect foil for the big VCX-100 (which I guess is why she was in the original Kel Special!).

With C-3PO crew Miranda's late game threat is hugely potent and that gives my opponents a choice they've never had to make from my other wingmen options.  It's always been clear that you can batter the Sabine Ghost down quickly and it's just a question of how much she takes out while you do, but with Miranda as wingman it's now so much harder to win the lategame after you've had a bruising run-in with my Ghost.  But if my opponent decides to prioritise Miranda in the early game then Sabine can run wild and do a lot of damage.

So, how is Experimental Interface as a replacement for Advanced SLAM?  Well on early indication it's done fine.  When I spoke to people regularly playing Miranda they often fed back that they rarely used Advanced SLAM anyway because opponents didn't put themselves where you could SLAM-bomb them.  Experimental Interface may give me a stress to use it, but if it's having an effect on my opponent's positioning simply by sitting in my squad then the stress doesn't make a difference.

So far I've used Experimental Interface only twice, but both times it was well worth the stress, including one time that it won me the game.  The big question I need to answer is whether it's doing enough to justify taking it over a Missile and Guidance Chips or Long Range Scanners.  I'll be trying both versions out, though frustratingly it may mean having to lose C-3PO to fit the powerful Harpoon Missiles in, and it's also a very different way of flying Miranda to be looking for those Harpoon shots.

C-3PO and Exp Interface, or Rey and Harpoon Missile?  Defense or Offense?  That's the choice I have to make. 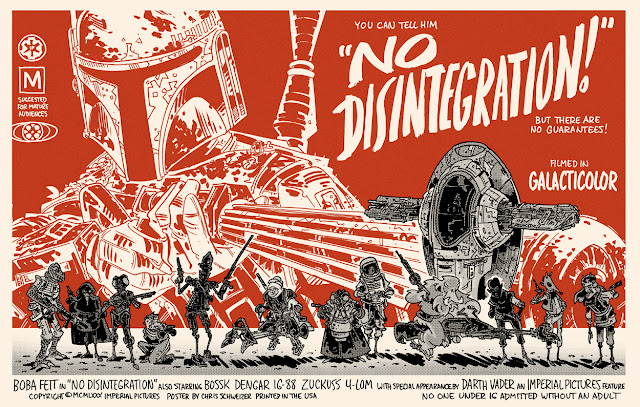 The last squad I'm going to share has nothing whatsoever to do with nerfed cards, but I really like it's janky awesomeness, so just sit there and read about it anyway.  I can take very little credit for this - a friend passed it my way because he knows I like anything with Boba Fett in, and I just tweaked a couple of cards around to suit my playstyle a bit more. 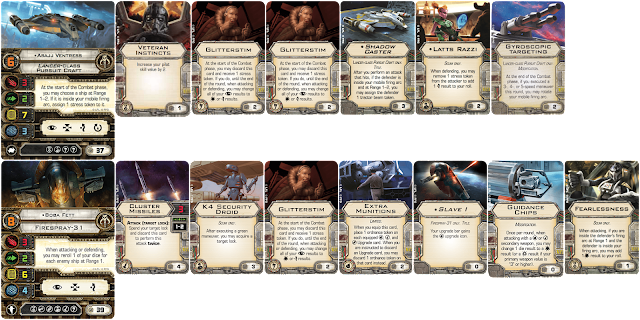 The short form of this is kind of 'Ketsu/Bossk but different', but when you get under the skin this list is setting up an alpha strike that is much more brutal than anything Bossk could manage!

Get your approach right and you can deal an incredible amount of damage.  What you're trying to tee up is Boba Fett unleashing his Cluster Missiles at Range 1, meaning he benefits from his reroll on the attack dice and also from a free Hit result thanks to Fearlessness... on both of his Cluster Missile attacks!  Mathing it out, your Range 1 strike with Boba deals an average of 7.8 hits.  7.8!

But why would your opponent ever give you that head-on joust at range 1 to use your missiles?  Well the obvious answer is 'they won't if they know what's good for them' but that's where Asajj Ventress and her Shadow Caster title come into it.  Running alongside Boba, Asajj's job is firstly to corral the opponent into Boba's arc, and then to give them a Tractor Beam token and barrel roll them into Range 1 of the dangerous Mandalorian (having taken an agility off them to boot!).  That ability to line up a killer one-two strike can deal massive damage.  My first opponent foolishly tried to joust Boba Fett with Rey only to take 12 damage and explode in a fireball!

Everything else in the list is really about giving you the action economy to both deliver that big alpha strike, and also to not just cripple over if it doesn't work out.  K4 Security Droid in particular lets you bump into the opponent and get a target lock, then have Asajj tractor beam the opponent off you for a big Cluster strike!  That you can deliver your strike when bumped, or by tractoring the opponent into range 1, really adds to just how potent the combo is and how often you'll make it happen.

It's a Firespray.  It doesn't turn very well.  You're probably going to have to k-turn more often than you want.  But when it works (and it's really not that hard to make it work) then your opponent is going to just melt away.

Or should that be... they're going to be disintegrated?