To be honest this blog has been 90% complete and sitting in my drafts for ages and the arrival of Captain Nym has changed the metagame a lot since this was first written.

To set the scene: back then I was tilting off my Nettling Imp squads just hitting a brick wall against Dengar/Tel and Dengar/Fenn, and I was looking for something that would kill Dengar.  You're about to read me discard Decimator/Vader as a squad, when in the current metagame I probably wouldn't hesitate to make a PS11 Darth Vader my wingman because of his decent game against Captain Nym.  Take this blog for what it is - a slice of how I'd gone about tinkering with a squad to solve a problem - and if you're a fan of the Upsilon Shuttle then there might be something good in here for you.

That's enough preamble so let's hop in the time machine and travel back a month or two, to a strange and unfamiliar world...

Results from World and Euros suggested that the Kylo Ren Decimator had come of age, and as I love Kylo Ren as a character it was something I wanted to give a try.  In theory this seemed like it would be a good answer to Dengar, as moving/shooting at PS10 would allow me to dodge his arc for the revenge shot a lot of the time, scoot into Range 1 away from any torpedoes, and I could use Kylo Ren tactically to support a wingman while I got the job done.  The squads that had done well at Worlds and Euros had Emperor Palpatine on board but in my push to nail Dengar to the wall I wanted to change that up and bring Rebel Captive to mess with his Expertise, with Gunner for helping to push damage onto the likes of Fenn Rau.

My Decimator loadout was pretty firmly set I just needed a wingman and I tried a couple of options out.  A friend of mine, whose opinion I trusted, had given Whisper a run but felt it failed the Dengar test unless you could bid at least 3 points (with Dengar/Tel at 98pts) so I looked elsewhere.

What these two options shared was that they both came in at high enough PS to worry Dengar (Brax at PS10, Vader at PS9 but matching the Dengar/Tel bid and beating the other Dengar bids), they could both token up to defend themselves, and they could both push crits to help trigger I'll Show You The Dark Side.

I managed to get a few games in with both options against Dengar and ultimately found them both wanting.  Vader proved to be the stronger of the two ships thanks to Lone Wolf rerolling his dice, but ultimately I felt like they both seemed to be weak spots in the list rather than strengths.  Instead of my fighters bringing more offense to the list I was spending most of my time working to keep them alive!  To be honest I probably would have persevered with Vader and just tried to make it work better, but I was hitting another problem at the same time... 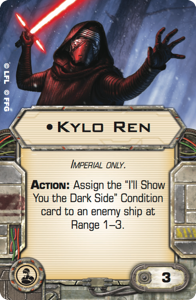 I needed to be able to boost out of Dengar's arc AND blind him at the same time.  But I couldn't equip Push The Limit or Experimental Interface to get an extra action without losing an essential upgrade and either dropping to a lower PS or losing my boost.  Where could that extra action come from?

The Upsilon Shuttle hasn't really found a definite place in the competitive metagame yet (although it did win a couple of Store Championships recently), but all the feedback I'd received was that the Coordinate action was a lot better than anybody expected.  Could that be the source of the extra action I needed for RAC?

Plus... it's the Upsilon Shuttle.  Kylo Ren's ride.  And it looks amazing.

I loaded the shuttle up entirely with the Coordinate action in mind - Major Stridan to extend the range to R1-3, Pattern Analyser to use Coordinate when stressed, Fire Control System and Agent Kallus to modify my shuttle's dice 'hands free' on the assumption that my action would be dedicated to the Decimator a lot of the time.

And it works.  It's actually pretty good.  Coordinate is excellent for the list - it's not just the benefit of a second action on the Decimator, but also a second action that can't be bumped, and a Boost action before you reveal your dial that makes your Decimator's moves much harder to predict.  The shuttle also provides a decent pivot point for the Decimator to rotate around, holding a point on the table with its big gun while the Decimator sweeps around behind the enemy.

I immediately felt like the shuttle was better than any of my fighter options and although I was pretty unfamiliar with running a pair of big ships I stuck with it for maybe a dozen games, probably winning more than I lost along the way despite facing some tough opposition.

Unfortunately I must report that I ultimately dropped the list from my rotation.  Fun as it was the shuttle became a liability in too many games, especially on occasions where a bad turn for the Decimator would see it soak up too much damage and be the first ship out of the game.  I never EVER won a game where the shuttle was left to mop up the enemy after the Rear Admiral had gone.  It was just too easy for the opponent to move into the shuttle's huge blind spot and stay there.

Trial & error doesn't always lead to success.  Sometimes it just leads to you boxing off a dead end and moving on to something new, and that's what I'm going to do from here (true - I was about to go and play the Ghost instead) but even when trial & error doesn't provide a pot of gold it can provide new wisdom, and I feel like I learnt a whole lot about how the Upsilon Shuttle works...

1. Fire Control System is rotten.  When you first build an Upsilon Shuttle probably the first upgrade you glue onto the ship is Fire Control System, a super-solid bit of action economy to make those 4 red dice really hurt your opponent.  The trouble is... it's garbage on the Upsilon because the ship's big base and sluggish dial makes it pretty rare that you're going to fire on the same thing twice.  In maybe a dozen games with the Upsilon I got to use the Fire Control System's target lock maybe just two or three times.

This isn't just my finding, though.  Meta-Wing tells me that it's been repeated wherever people are using Upsilon Shuttles.  In fact, not only is Fire Control System not the best System upgrade for the shuttle, it turns out to be the worst!


So what do you do instead?  Well I already had Agent Kallus on board, and I like that option.  A local players suggested another option I hadn't considered, though, and which has won me over a bit.

Weapons Guidance gives you a new way to deal with those pesky blank red dice when you attack, and unlike Fire Control System it works every time you fire at something.  To really shine you need to pair Weapons Guidance with something else to mod your focus results, such as Recon Specialist, Agent Kallus, or A Score To Settle/Expertise if you've got Kylo Ren's EPT slot to play with.  The combination of Weapons Guidance and Recon Specialist, for instance, delivers 4 hits 73% of the time.

The main downside of the Weapons Guidance plan is that stacking the focus tokens competes for your actions with Coordinate.  But that's ok because...

2. Coordinate is great, but it's easy to overuse it.  It's so tempting to stand there with your dials at the start of a turn and get really drawn into all the fantastic options that Coordinate is giving you for your other ships to Boost/Barrel Roll before they reveal their dial.  Sometimes those options are far too good to ignore, but a lot of time I think it's a trap to be avoided.  You've spent 35-40 points on your Upsilon Shuttle, at least, and that sort of investment really demands that you get something from it.  If all you're really using it for is an extra action for another ship you're potentially selling short 40% of your squad.

Think of it this way: most of the time you'll be playing the Upsilon along other ships that had always been perfectly competent without the option to Coordinate an action to them.  Let them look after themselves as much as possible and save Coordinate for when it really matters... the less you use Coordinate the more likely you are to surprise your opponent when you finally make it count!

3.  The Upsilon Must Die.  The Upsilon Shuttle is not your engame piece.  You can stick Engine Upgrade on and really kit it out if you like, but it still won't be your endgame piece because 1-on-1 it will lose to almost anything thanks to the crappy dial & defences.  Making the Upsilon effective is, in my view, a delicate dance of ensuring you make it annoying enough that the enemy has to deal with it first, but not overloading it to make that happen or allowing it to die too quickly. 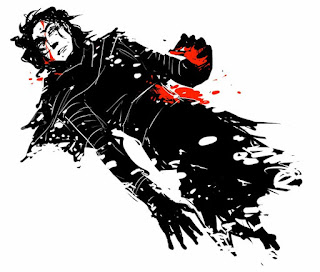 The Upsilon is going to work best when you can make your opponent shoot at it for a few turns, and then capitalise on the Upsilon's ability to distract the enemy by taking that time to remove a ship or two, or by sneaking a big threat into endgame like a TIE Phantom or Omega Leader.  It's a lot like how last year's Dash/Lothal lists just used the VCX-100 as a big distraction to ensure Dash could mop things up in the endgame. 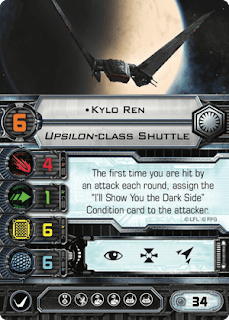 4. Kylo Ren is the best Upsilon pilot.  In my Decimator list I turned to Major Stridan for the specific reason of wanting to Coordinate as much as possible.  Although the Range 3 Coordinate is a nice thing to have, the Elite Pilot Talent and I'll Show You The Dark Side of Kylo Ren are definitely a lot nicer, especially when you come to the conclusion that The Upsilon Must Die.  As you know I'm a fan of using Metawing to support my squadbuilding and I don't think it's any coincidence that Kylo Ren is the only Upsilon pilot to really make any waves or win any tournaments.

My trial and error with Rear Admiral Chiraneau wound up forking my squad development.  My interest in flying turrets switched from the Decimator to the Ghost and ultimately became the Ghost/Nym list that I wrote about last time.  The other branch span off into a jousting squad to keep plugging away with the Upsilon Shuttle, like a hybrid with my old Nettling Imps and that looks like this... 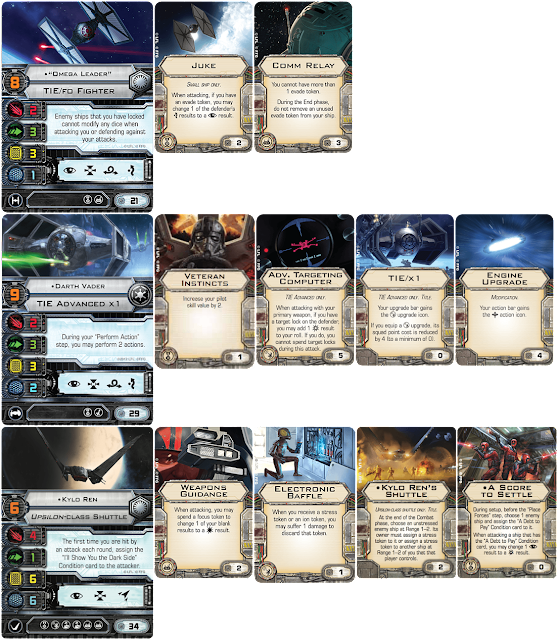