What Has Wave 5 Ever Done For Us?

It's alright for those Jedi or the Separatists, swanning about in their new ships and lording the place up.  It's all Nantex this, Chopper that, Sun Fac the other...

But if you're not a player loyal to one of those two lucky factions then Wave 5 may well feel like you're coming up short.  There's a few re-releases of First Edition ships that bring new options into Hyperspace format, but not even everyone gets that much and the Resistance and First Order players get nothing.

Wave 5 brings a re-release of the Ghost, the 4 red dice-toting freighter from the Rebels cartoon series.  The Ghost was a terror at times in 1st Edition and it's noticeably weaker in 2nd Edition and ithasn't really made many significant waves in Extended so far.  I don't expect a lot from it in Hyperspace either - it's a big lump with a big gun but with so many swarms about it will eat damage very quickly.

The Sheathipede shuttle is a better bet for inclusion in your squad as at 32pts for AP-5 it's arguably the best cheap coordinate option in the game (especially as the coordinate action is white), and his ability to give actions to stressed ships pairs beautifully with Braylen Stramm.

Locally I've seen a few Rebel players keep Beef alive in Extended by moving to AP-5 then funnelling Jan Ors extra dice through either Braylen's rerolls or a double-modded Wedge Antilles.  AP-5 could be the missing piece for Hyperspace 'Beef' to reappear as that saving for the cheap shuttle makes up for a lot of the other price increases that Beef got hit by.


There's no Jan Ors in Hyperspace, which is a real shame, but it does give you the points spare to bring back Cassian Andor or another decent gun for the squad like Ten Nunb or Thane Kyrell.

The other major addition to the Rebel arsenal in Hyperspace isn't a ship it's the powerful Jedi crew, Kanan Jarrus.  Kanan was the one major advantage that the Extended versions of the Millenium Falcon held over the Hyperspace versions, but with the Ghost re-release he's now Hyperspace-legal too!

Kanan's arrival is really nicely timed with Precognitive Reflexes for Luke Skywalker to unlock a potentially powerful two-ship pairing of tough Jedi who are hard to kill.


The final piece in the Wave 5 puzzle for A-Wings is Snap Shot A-Wings, which I played a lot of in 1st Edition.  I'm in the camp that feels the range 2 version of Snap Shot is actually worse than the old range 1 version - your 'hot spot' for Snap Shot is a lot bigger but it's harder to keep the enemy from ducking inside that hot spot and a lot harder to get multiple hot spots overlapping in one place.  I'll almost certainly give it a try though, and this all looks like it fits together very nicely... 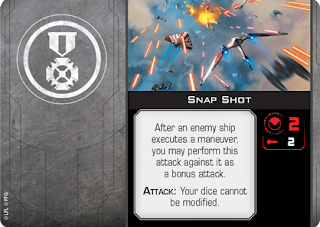 The Jumpmaster is a dreadful, dreadful ship in Second Edition.  As the scourrge of First Edition it was hated by all and sundry so in converting over to Second Edition the Jumpmaster was given a very comprehensive beating which completely hobbled it.  The ship is yet to recover despite repeated points cost reductions, and it may just be fundamentally broken with the combination of dial and red actions it's been handed. 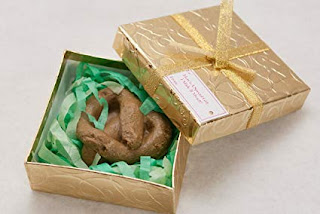 For its part the M3-A Scyk has spent almost the enture history of X-Wing - either First or Second Edition - without a real purpose in life and that's basically still true.  There's a ton of pilots, they all do something, none of them are worth bothering with especially.  Combining those two ships into one Wave is a bit like receiving a package with not one turd in, but two.  At least it's all over at once though!

I can't see anything much for Scum in Wave 5 at all.  In fact if anything I think life gets quite a bit harder as Sun Fac and Precognitive Reflexes both cause real problems to some of the best ships the Scum currently have, like Fangs and Starvipers, especially Guri.  Both those ships trigger a bunch of bonuses for hunting into Range 1 of the opponent but that's a dangerous place to be if you're up against Ensnare on the new Nantex fighter, and a really hard place to guarantee getting to if your opponent can boost or barrel roll before they move!

To rub salt in the wound the new Ahsoka Tano gunner just makes the scum Han gunner look terrible by comparison and just highlights how overcosted he really is.  Does nobody check these things out, or what?

Scum players, I'd start looking forward to Wave 6 when you get... uh... the Hounds Tooth!

Hey, you know that forgotten little TIE thingy that suddenly become the hot new kid on the block in Extended last month?  Well now the TIE Advanced Prototype (or TAP, to it's friends) is coming to Hyperspace too!

But wait, back up a second before you run out and buy a bunch of TAPs... there's still a missing essential ingredient in Hyperspace - there's no Lambda shuttle.  Without Colonel Jendon feeding the Inquisitors their early Target Locks they can't wield that Concussion Missile threat or benefit from Fire Control System, and without those toys they're... they're pretty mediocre I think.  They're really cheap for a force user, great actions, great dial... but is there's room to spend that many points on just 2 red dice?

Grand Inquisitor has a better chance of making the grade in Hyperspace because he's not so dependent on Jendon.  At 52pts he comes in costing about the same as Soontir Fel or Duchess with Fifth Brother and it could well be a straight toss up which of those turns out to be the best ace option (and to be honest you're probably picking 'best 2 out of 3' anyway).

The only Hyperspace Imperial lists that I think gets a meaningful buff from Wave 5 are those that can incorporate Precognitive Reflexes onto Darth Vader without giving up all the bid they need to run with in order to really benefit from Pre-positioning anyway.  That's not an easy ask and it may well spell the end of 'triple aces' if we continue to see some deep bids in the metagame. 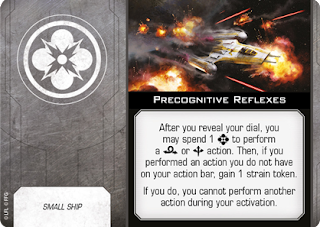 To be honest, I'm actually not clear that Precognitive Reflexes are going to really help you in a list like this where you need to ring-fence the bid, as it's sucking a lot of points from everything else.

Precognitive Reflexes may fit better in a list where Vader runs as your endgame ace threat but you aren't forced to hold everything back to make the other 110pts of your list work.  It may be important in a Vader/Decimator list or Vader/miniswarm, for instance...


The other option would be to switch down to a double Aces & support list, to preserve the bid you need.

Aces & Basics (187pts)
Precognitive Reflexes is clearly very good for Vader, who doesn't naturally get a Boost action.  But it may overall not be a great addition for the lists that Vader is currently appearing in as they can't spare the points without losing something important.  Thats the puzzle for Imperial players to solve.

Wave 5 Release: None
Notable Hyperspace Additions: None
Things to say about Wave 5: None

I could try to spin this out but there really is nothing I can see that's of interest.  There's only one Force user in First Order at present so Precognitive Reflexes isn't going to find a great home, as if Kylo wants anything it's Hate as his Force Talent.  The TIE/fo could take Snap Shot but it's a really bad fit - the Omega Squadron Ace is a bit too expensive to be a happy carrier for Snap Shot, and because the TIE can't really go slow it's going to struggle to range control the 'hot spot' anyway.  It just doesn't synergise with anything the faction is trying to do (not that it's all that clear what that might be!) 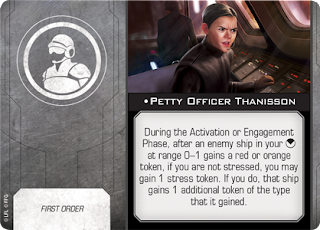 The one bright spot that I could pluck out most readily is that the Petty Officer Thanisson crew is actually a bit annoying for Sun Fac to play against as you can double down his Tractor tokens when he rotates arc.  That at least means he can only pass off one of the tokens in combat and you still get to shoot him with -1 Agility.  It ain't much, but it's something.

It really ain't much, though.

Just like the First Order, the Resistance don't get any ships at all in Wave 5.  Conspiracy theorists will tell you there's a secret expansion or two coming for the new film in December, I don't know about that but it does seems a little suspicion that these two factions both get nothing this time around.

There's pretty much nothing for Resistance players to jump on from Wave 5 with the exception of Snap Shot.  I've already said in the Rebel section that I don't love the new Snap Shot as much as I wanted to and that's true for Resistance uses too.  It maybe even goes doube so as you're likely to spend half the time using your rear arc while the Rebel A-Wing at least throws K-Turns and S-Loops to move the Snap Shot arc around.

The one thing to mention, which a lot of players have already spotted but isn't immediately obvious, is that you can use Snap Shot as your attack in the combat phase too.  Usually that's worse than your primary weapon but for the RZ-2 A-Wings it means they can have their arc facing backwards and still shoot at something that happens to land in front.  It's a niche use, but worth knowing if it's the difference between shooting and not shooting!

The best weapon the Resistance has may be to double down on Poe Dameron with a big bid.  He's your Initiative 6 ace who can move after Sun Fac and the Precognitive Jedi to hunt them down, and with his double actions Poe can really lay a hurt on people when he catches them in his sights... and none of their tricks really matter if you can tag the bad guys with an Ion Cannon!

With so many players running in fear of what Sun Fac might do to their flimsy little 4 hull A-Wings there's a chance that Poe is your best bet weapon for being able to say...