This week FFG published a round of changes to the Rules Reference for X-Wing.  This isn't uncommon around the time a new Wave is launched, as they try to get ahead of any questions players might have about how the new pilots and upgrades work together.

What is a bit more unusual is that this time the Rules Reference made some changes to the rules that have some bigger implications and actually change how existing things work in a meaningful way. 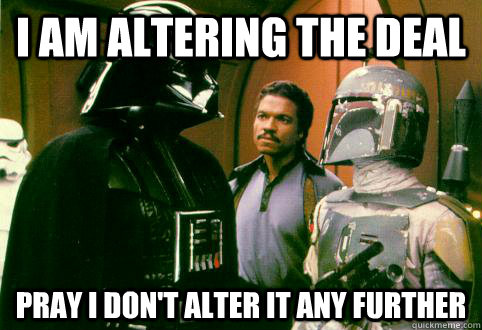 I've seen quite a lot of players get confused by these changes so I thought I'd take the opportunity to lay out some of the most important ones and clear up what seem to be some significant misinterpretations.

This is the biggest change in this revision to the rules reference, and make no mistake that this DOES change how the game works in a meaningful way.  A lot of the time these rules reference changes are just locking down that the game does in fact work the way that everyone always assumed it worked anyway... this isn't one of those times, though.  This is a real change. 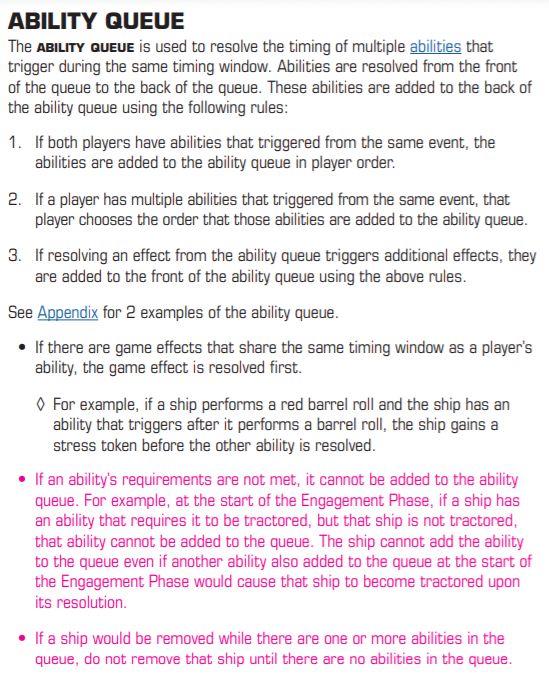 What this effectively does is break using abilities into two parts.  Previously you would perform an ability as one continuous step of 'Check ability is legal, say you're going to use the ability, resolve the ability', but under the new timing rules you announce all abilities that have the same trigger point, then resolve all those abilities in the order they were announced.

VERY VERY IMPORTANT: all this really only matters for effects that have a specific trigger point and which share that trigger point with other effects.  You're looking for key phrases like 'After' or 'Before', 'At the Start of' or 'At the End of'.  Those abilities have a single specific moment in time when they can take effect and the new timing rules dictate how you organise those theoretically simultaneous actions.

Finn and Heroic still work together for instance, you can add a blank with Finn then use Heroic to reroll it as you've not passed the point to trigger Heroic after you use Finn.

Ok, so assuming it is something with a specific trigger point that we're talking about it all changes enough that this that a visual aid may help with understanding how it all works.  Here is how it worked in the existing X-Wing timing rules.  Let's assume it's the start of the Engagement phase and there's three abilities that all have 'At the start of the Engagement phase...' as their trigger... 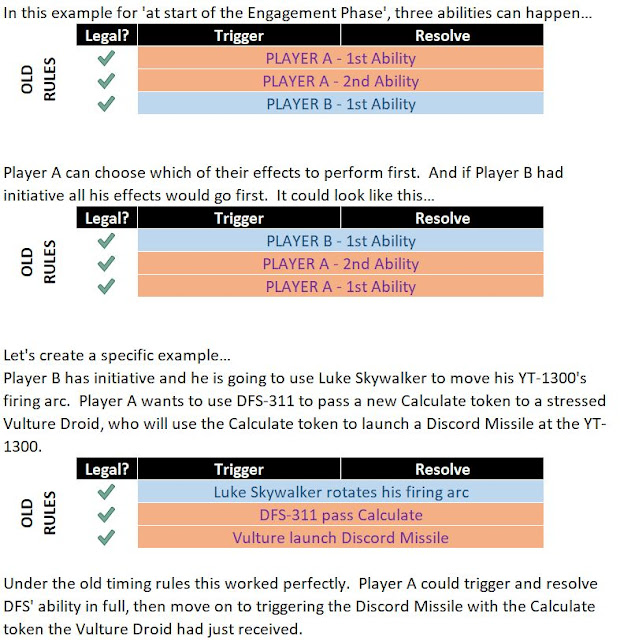 But in the new timing rules triggering abilities onto the Ability Queue and then resolving them back off it are two separate things... 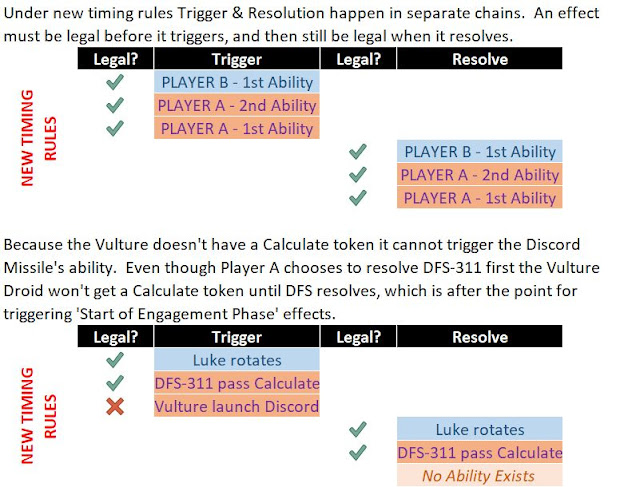 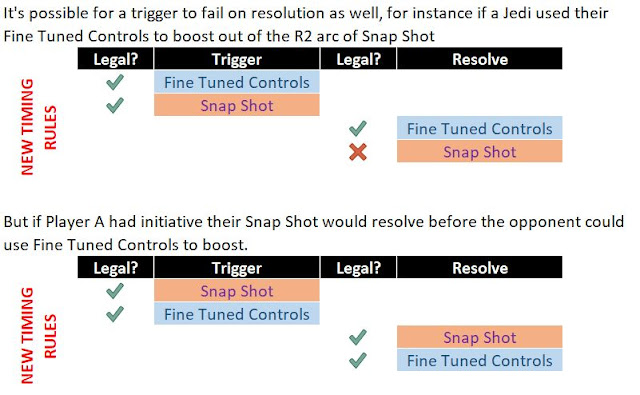 I just want to underline two key points here:
There's a lot of examples I could throw out for the combinations of effects that players may have been using before, but a couple of obvious ones are:

In general terms, the old timing rules were designed in a way to enable players to make combinations work.  If there was any possible way that you could organise your effects into a way that they would work then the rules allowed you to do so.  The new timing rules flip that principle on its head and make it as hard as possible for cards and timing to interact.  That's a detriment to players who had spent time working through the details of card combos, but for the average player it's probably a move for the better that eliminates the risk of being bamboozled by complex timing situations your opponent had hoped you wouldn't have spotted could happen.

Less combowing, more having to nail your positioning first time rather than rely on fixing it later.  Personally, I like it.

While players are being confused by the ability timing change they've also had to take on board a pretty straightforward rules clarification that has been made more confusing than it needed to be through a bit of loose wording.

The major thing to remember here is that this ruling ONLY affects things that are specifically looking for a ship's 'revealed maneuver'.  There are only a few cards that do so and it's pretty much just a Wave 4 effect at present, on cards like Cova Nell or Dinee Ellberger.

The reason so many players are getting confused is because they assume it's a much wider change.  That's because FFG left this little apparent contradiction hanging:

You can read that sentence as many times as you like and it's still going to sound like bullshit.  It's correct, though, and that's why players are getting confused.  The best way I've found to think about it is to mentally substitute 'revealed maneuver' for 'printed maneuver'... that is: it's the maneuver that's actually printed on the actual cardboard you're holding.

eg. assume if I'm playing with Hera Syndulla and she had Nien Numb on board as crew to make your banks blue...

Hera reveals a Blue 3 Bank maneuver as Nien Numb changes the difficulty of her maneuver.  Her 'After you reveal' pilot ability then triggers and she changes her dial to a Blue 1 Bank maneuver, which is what she executes.  Although at the point where she 'revealed her dial' it was a Blue 3 Bank her 'revealed maneuver', if any game effect later goes to check, is a White 1 Bank - that's what is printed on the dial after she changed it.

I'm using Hera as an example because with her pilot ability she's something that a lot of people have assumed it changed by this new ruling, when in fact she's not affected at all.

Being Ionised really sucks - you have to drift forwards and you can only take a Focus action.  Previously the rules stated that you could only perform a Focus action during your Perform Action step, but this has now been locked down to also state that you cannot perform any other actions while you are ionised. 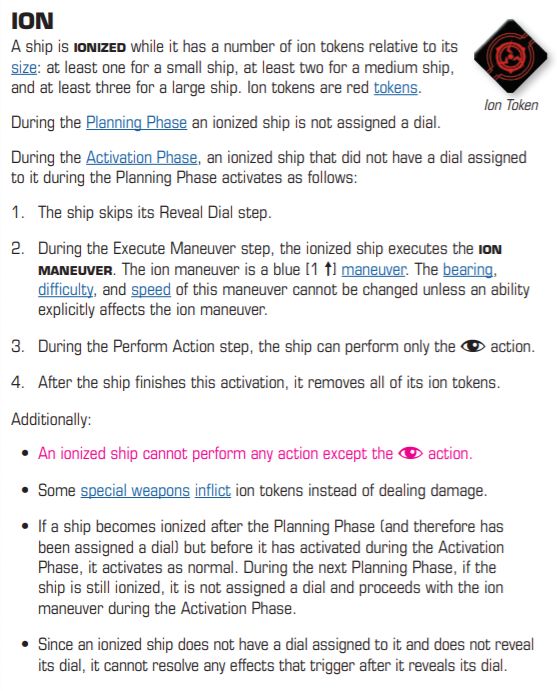 What this does is affect abilities that would give you an action outside of your Perform Action step, like Advanced Sensors or if somebody nearby hands you an action with Coordinate.

Ion is supposed to simulate your ship drifting through space as sparks fly from dead electronics in your cockpit but there were previously game effects that got around this.  Not any more - when you're ioned all your gear is dead and nothing will help.

NOTABLE EXCEPTION: the first part of Ion says you cannot perform anything but Focus during your Perform Action step.  The second part of Ion says you cannot perform a non-Focus action while you are Ionised.  What you CAN do is perform is activate your ionised ship and take his Focus action in the Perform Action step, remove the Ion token at the end of it's activation (so it's no longer 'Ionised') and THEN coordinate an action other than Focus into it from a ship that activates later in the turn.

This change is very simple and is aimed pretty much entirely at one pilot: Finn in his Transport Pod.  The previous timing of Finn's ability and Strain meant that he could benefit from adding a Focus result then immediately remove the Strain token after he had defended.  The new timing says Finn would only remove the Strain token after he has suffered the effects of rolling 1 less dice, so it's not going to be immediately removed.

I think Finn had already passed his 'Best Before' date in competitition and he was being phased out anyway, but this change will certainly hasten his departure.

A lot like the Ion ruling, the Tractor rules change is one that makes things make a bit more sense.  Tractor tokens on your ships do two things: they reduce the defense dice you roll, and they allow your opponent to move your ship on the table with a boost or barrel roll.

In the old rules reference those two effects happened independently of each other.  Medium and Large ships required multiple Tractor tokens before your opponent could move them, but you rolled one less defence dice as soon as you had a single Tractor token.

In the new rules both effects are tied to being 'Tractored' which is the state you're in when you have 1, 2 or 3 Tractor tokens depending on your ship size.  It's a subtle nerf for Tractor tokens that makes them a lot less useful against Medium or Large ships... good timing with the new Nantex fighter potentially throwing them around like candy! 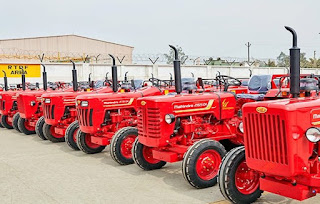 A very small number of upgrades (1 is a small number: it's Cikatro Vizago) allowed players to circumvent squadbuilding restrictions by moving upgrade cards onto ships that wouldn't normally be allowed to equip them.

Not any more.  If a ship isn't allowed to equip an upgrade before the game it's not allowed to be given that upgrade halfway through the game either.

Sorry to those players who liked a bit of Cikatro jank, but this change does make a lot of sense and it closes off a few potentially abusive interactions around permanent Cloaking Devices and the like.  It's a good thing, really.
Posted by Stay On The Leader at 14:19