When I first picked up my 'Slaughterhouse' TIE Swarm last year something clicked for me and it instantly felt like it fit me, and I loved playing with it.  I loved how aggressive it was, that was definitely part of it, but I also really enjoyed having that many ships at my disposal.  I know a lot of players find a swarm quite a challenging prospect but I was the opposite and loved the way that I could use my ships together - one ship looking to take up a blocking position when the others took position to fire.  Maneuvering and positioning is everything when you play a TIE Swarm - you need it both to stay alive and to deal damage - and with only a Barrel Roll at your disposal it can need real cunning to lay your traps in the right place at the right time.

While most Crack Swarm players last year were using TIE Fighters there was a limited outbreak of the Rebel variant using A-Wings, especially in regionals in the USA.  Although on the face of it the A-Wing Crack Swarm was similar it in fact had some key differences that meant it would play very differently.  Most telling was that the firepower of the 'Chihuahuas' was a lot lower as five A-Wings clearly couldn't match the damage output of six Tie Fighters, especially with Howlrunner rerolling their attack dice.

This was more than just a small increase in firepower, by the way - the TIE Swarm was 42% more aggressive, rolling an average of 10.7 hits in a volley compared to just 7.5 hits from the A-Wings!


'Chihuahuas'
What the A-Wings got back, though, was more maneuverability and survivability.  Each A-Wing has an extra point of Hull/Shields, and with Autothrusters equipped they performed much better at range 3 or against turrets.  The 'Chihuahuas' may not have stung as hard as the Tie Fighters but they could dance and weave and wear their opponents down over time.

The arrival of TIE Defenders rang the death knell for the Crack Swarms, at least in competitive play.  The Defenders themselves were bad enough, with all their green dice, tokens and hull points each one was like a miniature IG-88 Aggressor, but the firepower everyone else was bringing to defeat Defenders would swat your flimsy ships out of the sky before they could fire.


Risen From The Ashes

In faint signals from a remote parts of the galaxy I heard tell of a new type of A-Wing swarm... 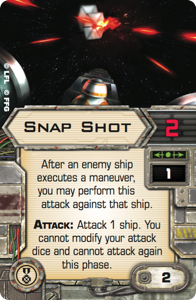 Abandoning the safety of Autothrusters for the new Snap Shot EPT, the 'Snap, Crackle & Pop' or 'Snap Snacks' A-Wings brought a new tool to the swarm player's disposal.  Perhaps the best way to think about Snap Shot is that it's 'area denial' that makes life hard for your opponent, continually chipping away with weak attacks that eventually add up.  You're not just looking to line up shots for your combat phase, but to opportunistically disrupt the opponent's planning.

The way I imagined the Snap A-Wings playing was a lot less direct than a classic Crack Swarm, and instead the objective would be to basically just stay alive as long as possible and let the gradual attrition of Snap Shot attacks build up.  The more ships you have on the table the more the opponent has to avoid, so you're not trying to outjoust the opponent but trying to block him, flank him, frustrate him.

It sounded like an interesting flying challenge but I didn't have the A-Wings or upgrades to give it a trial run, so I steered clear.  The arrival of Sabine's TIE Fighter in Wave 10, then, removed a lot of those obstacles  of my own private collection being lacking.  It also brought a really interesting new potential synergy to the list. 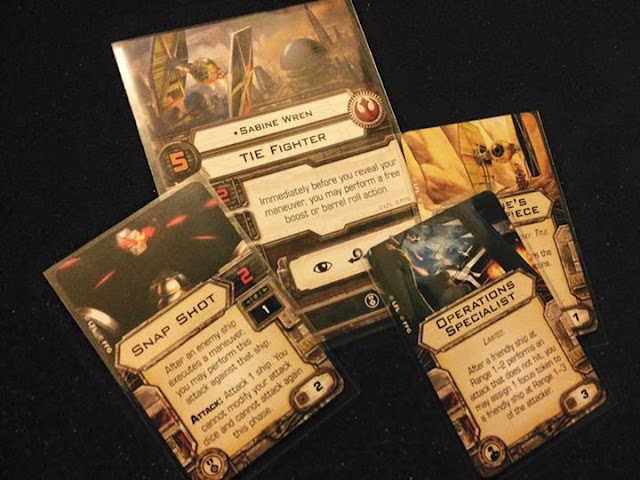 The problem with Snap Shot is that your attacks aren't modified so a lot of them miss.  The problem with Operations Specialist is that you don't tend to build lists where you're going to miss a lot of shots and 3pts is a lot to spend for a Focus token as consolation prize if you do.  The beauty of putting Snap Shot and Operations Specialist together is that you can easily generate three or four Focus tokens per turn due to the iffy nature of your Snap Shot attacks.

The tough thing about Ahsoka Tano is that you rarely want to leave her without a Focus token just to help another ship out, but with Operations Specialist feeding her a second token a lot of the time Ahsoka becaomes an action economy 'fence', turning your Operations Specialist token into an Evade, a Boost, a Target Lock... whatever you need!

The final squad I wound up building was this:

Oh, how I love Sabine Wren.

I obviously love TIE Fighters already after playing with Slaughterhouse last year but Sabine Wren has taken that romance to a whole new level.  With her pre-dial boost/barrel ability she behaves a lot more like a TIE Phantom than a standard TIE Fighter (and I love Echo already) so she has rapidly become a favourite.  The addition of the Operations Specialist has also proven to be a perfect fit, especially for a squad that gets caught in tight furballs a lot, bumping into each other - getting a Focus token onto an A-Wing that lost it's action can easily be the difference between life and death.

My love affair with Sabine is so great that I have been inspired in poetic form:


Sabine's TIE, dancing
Brings death by a thousand cuts,
With Focus for all

Sabine's maneuverability is an incredible benefit to a list that is all about landing bumps and placing Snap Shot arcs in awkward places.  One turn she will barrel roll left to hard turn right and maneuver a shot in a tight space, another turn she will boost left and then drive a 5-forwards across the table, landing a bump that seemed almost impossible.  This graphic shows just how much her ability changes where you can place your Snap Shot arcs, as well... 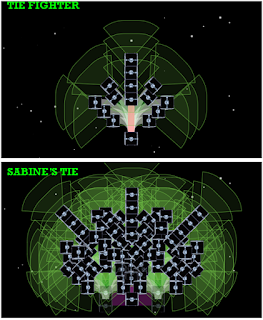 So-so Ahsoka,
Much better than an A-Wing?
She will do for now

The deep and profound love I have for Sabine is matched only by the apathy I currently hold towards Ahsoka Tano.  Although your squad may initially start up in formation the unpredictable furball nature of how Snap Shot makes you fly means that all too often she's just outside Range 1 of the person you really want to give an action to.  If her pilot ability was Range 1-2 then I would be lining up a menage a trois with myself and Sabine, but as it is I'm a lot cooler on the deal.  I'm not swiping left just yet, though don't worry!  Sabine with Operations Specialist comes in at 21pts which means I need to save a point somewhere and I think Ahsoka is better than 19pts of A-Wing (say, just with Snap Shot and no Crack Shot) but she's not as exciting as I wanted her to be.

Sometimes, though, Ahsoka really proves her worth.  In this example picture below one of my A-Wings was able to Snap Shot the IG-88 as it moved into position, then Ahsoka fed him an action to Boost out of the IG's arc and fire on Boba Fett in the combat phase!  Moments like that are really sweet and maybe with a bit more practice I'll get better at keeping Ahsoka in range of the people who need her help.

A neat little side effect of bringing Sabine and Ahsoka into the squad to replace two A-Wings is that you're increasing your pilot skill.  At times this can be a headache as ships won't move in the order you really want them to, but with Snap Shot in particular I think it can be a big benefit to have some of your arcs moving early in the Activation Phase and some moving later - it can create a tougher obstacle course for the opponent to thread their ships through.

And that's really the driving principle for the least, and it's why I'm enjoying it so much - positioning is everything.  Your attacks are rubbish and you can't modify them, but if you fly well you get so many of them that it doesn't matter!  The combination of low and high pilot skills, of boosting A-Wings and Barrel Rolling TIE Fighters, of Sabine and Ahsoka's abilities to reposition before you move or after everyone has moved... it all demands real attention but rewards the skillful flyer.

Although I love playing Phoenix Squadron I'm taking it slowly with this list as learning to fly Snap Shots is an unfamiliar challenge in itself.  That means I'm only gradually increasing the difficulty of opponents I seek out with it, and it's certainly not been tested to the max yet, but so far it's passed every test with flying colours and I've won every game.  It causes the opponent such difficulties that a single mistake by them can lead to a bad bump that they'll never recover from, or to them sitting in arc of multiple Snap Shots and losing a ship as a result.

Lots of ships, lots of attacking, lots of actions, extreme importance of positioning and facing?  Phoenix Squadron is proving exactly my type of list.  As I push the difficulty level of my opponents over the next few weeks I'll get a better idea of quite where it sits on the power tiering in this highly cutthroat competitive metagame, but I already know where it sits on my personal fun tiering.  Hell, this squad is worth the entry fee just for Sabine alone!

If you're after something a bit different that will really put your flying skills to the test, then maybe Phoenix Squadron can work for you too? 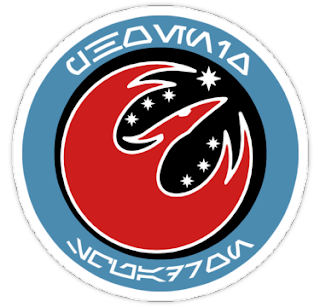