Jumping to Hyperspace: The Good Guys

Last week's points and format changes had some dramatic changes, none moreso than in what was legal for players to bring in Hyperspace Format.  Bringing the format back to its original intended function of being a very tight selection of rereleased Second Edition product. 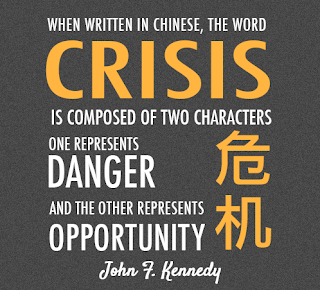 Every faction got hit.  Everybody lost staples that had defined how they would build squads and fly on the table.  And you know what?  I think that was the point, and it's fine.  We've still got Extended format for playing everything we could ever want and now Hyperspace will be a genuine breath of fresh air whenever we pop in to visit: different ships, different pilots, different upgrades, different strategies.

Yes I had to throw away lists I wanted to play.  Yes my plans for Milton Keynes System Open went down the pan unexpectedly - everyone's did, pretty much.  But I'm fully engaged with trying to work out what happens next and what the new opportunities are that have emerged.

In this blog I'll look at 'The Good Guys': Rebels, Resistance and Republic and then pick up 'The Bad Guys' next time.  Rather than mope around worrying about what could have been, let's spend our time looking at what CAN be.

Rebels weren't doing that well in Hyperspace format and in Q4 2019 their best performing archetype in Metawing was only the 28th best squad.  That was Jake/Wedge/Thane/Braylen and it was basically the best Hyperspace proxy for Dan Taylor's Extended list from the World Championship Final with Thane replacing a couple of Z-95s.  Aside from that squad the Rebels basically had two broad groups of squads - lists with the Falcon and some four-ship Rebel Beef that had passed its sell-by date.  Both those squad archetypes, which weren't exactly setting the world alight anyway, got hit pretty hard in the points change.

Pour one out for Wedge Antilles the most dangerous Rebel pilot, and losing the U-Wing entirely doesn't just take away a solid brawling ship it also removes the best ship for carrying Leia Organa, and Cassian Andor who was the best support for Braylen Stramm.  In the other squadbuilding strand Rebels get to keep the Falcon but most of the upgrades that made it work have gone... no Force from Luke or Kanan, no regen from R2-D2, no Trick Shot or Lone Wolf in the talent slot so you can have a Falcon but it's not the endgame behemoth it once was.

These cuts really hurt a faction that was already suffering in Hyperspace.  What did Rebels get in return?  Is there a new hope?


The basic T-65 X-Wings have crossed a 'break point' in cost and you can now field 5 of them.  In the dying days of First Edition we finally got to play 5 T-65 X-Wings in a squad and they were actually pretty amazing so a lot of people are really excited/scared. by this possibility.  A lot of people are going to try this... but I don't think it's good enough.  More precisely: I don't think it's good enough reliably enough.  The raw statlines of the T-65 X-Wing are impressive and they're in a top tier for efficient damage dealing, but if all your hopes are pinned to a load of single-modded dice with few frills then you're leaving yourself open to the whims of variance and getting too many blank dice. 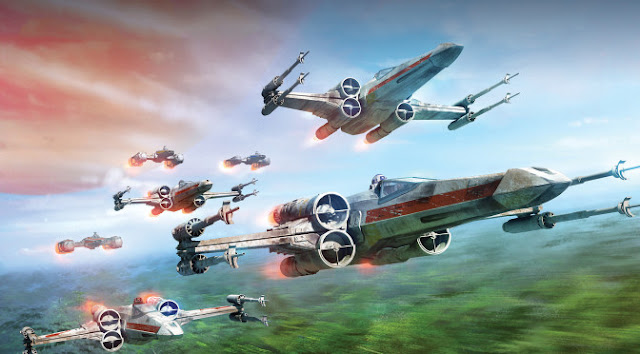 Five T-65s is going to be a really solid B-tier list that will be played often enough to keep putting up occasional A-tier finishes.  Those A-tier finishes will then be used by the people playing it to argue that it's not a B-tier list, but that can't really be helped.  For the rest of us, the five T-65s are going to be an important gear check for our squads and we should all have it in mind as we're squadbuilding just to ensure we have answers to that matchup.

Maybe by making sure all your ships are at least Initiative 3 so you can kill a T-65 before it fires...
This sort of list is what's left of Rebel Beef and it's undeniably fallen a long way from when it was an enormous juicy sirloin - this is more like a tin of stewing steak.  But if everyone else is shopping at the discount supermarket too it might well be good enough, and if this meets the five T-65s it should have the higher Initiative and better dice mods to edge that battle. 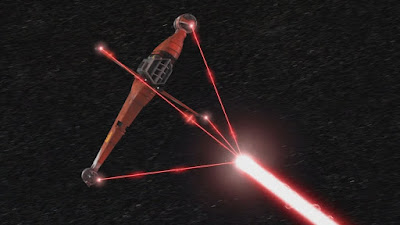 People will try and make four double-tapping B-Wings work with Stabilised S-Foils.  They won't do the maths first and won't find that against most ships double-tapping without dice mods is worse than single modding one primary attack. 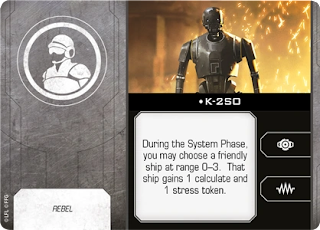 FFG wants you to buy the Hotshots and Aces pack so Leia's pilot card comes with basically a free Force point attached.  Force points are really good.  I genuinely don't know if there's enough left to equip on a Falcon to make it worthwhile bringing one, but I feel like if there is enough then it will be either Leia pilot or Lando with K2-SO crew (for 3 actions per turn).  Either of those could come in cheap enough to be backed up by a couple of good solid damage dealers to do the heavy lifting.  I'm just not sure what the plan is for a Falcon that doesn't have R2-D2's regen in endgame.

The fortunes of the Resistance recently seem to have risen and fallen in line with those of it's most innocuous ship - the Transport Pod.  While Finn's pilot ability was providing incredible protection from enemy fire the Resistance jousting block was a fearsome force but as soon as an FAQ changed how Strain worked to rein Finn in the whole Resistance seemed to fall away dramatically.  I've personally been very surprised to see this happen because I still think that in the T-70 and RZ2 A-Wing the Resistance has some great ships and pilots, but the data from hundreds of tournaments would suggest I'm wrong.  Recently what's left in Resistance has been propped up by Rey and Vennie.

Neither Rey nor Vennie are in Hyperspace Format.


And yet despite this I think there's a lot of good reasons to be optimistic for the Resistance.  As I said I was a little bemused by just how badly they were performing anyway and all the other good ships and pilots made the cut into Hyperspace.  Where the Rebels saw a lot of their best pilots taken away you've got pretty much everyone you could have wanted in the Resistance ranks and you can field pretty much exactly the same squads you could before all the changes.

And, importantly, Poe Dameron is now almost certainly the top I6 ace in Hyperspace.  Anakin is gone, Wedge is gone, Quickdraw is gone, Vader lost his Afterburners, Han lost all his tricks... in a much-depleted field of dangerous I6 pilots Poe Dameron looks a very attractive option.

And with a couple of brand new A-Wing pilots coming in Hotshots & Aces the '5As' archetype not only survives into Hyperspace but gets a real shot in the arm.

T-70s and A-Wings will be ever-present in Resistance lists but the upcoming Fireball release looks costed attractively to be a Torrent-style filler in the list and could offer something new as well.  I don't think Resistance offer many surprises in Hyperspace as it's a known quantity, but it's a quantity that we already know is really solid!

There's no getting away from it, the Galactic Republic has not enjoyed the transition into Hyperspace format.

Previously the Jedi and their clone troopers were a dominant force in the Galaxy.  With a wide range of Jedi to call upon and the flexibility of taking either Calibrated Laser Targeting or Delta 7B configurations for their starfighters they were endlessly customisable, especially with access to both R2 and C1-10P astromechs.  Gold Squadron Torrents were an effective filler ship that enabled you to squadbuild with freedom, or indeed became huge threats when Sinker was around.

So it's a bit of a shame that virtually everything they were using has been axed out of Hyperspace.  Anakin Skywalker is gone, Mace Windu is gone, the entire Delta 7B configuration is gone and between that and a price hike the shield regeneration is gone.  Oh and C1-10P is gone.  And all the Torrent pilots.  And the cheapest ARC pilot.  And Sinker. 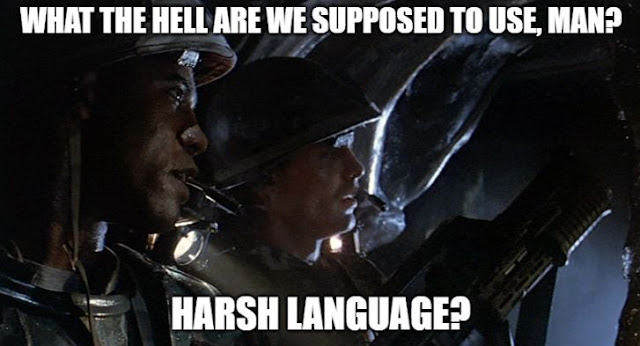 All is not lost.  There was enough strength in depth in the Republic faction that you can still build functioning squads, but I think the experience of squadbuilding for the Jedi is now incredibly constrictive.  Without 25pt Torrents or the 70pt Delta 7B Aethersprites the 'Tetris' of building varied Jedi lists has been broken and you're almost unavoidably forced into "I'm going to play 4 ships that all cost about 50pts". 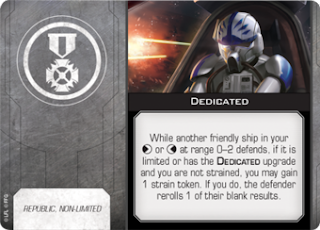 As you can see, some of those 4 ship builds can look pretty potent.  You're still Jedi, the ARCs are still beefy, Broadside is still good, the N1 Starfighters are still fast and tough.  But from a world where the Jedi seemed to have endless successful variations I think it's going to be hard to make a Republic squad that doesn't look at least a little bit like that one, just because there's nothing expensive or cheap you can actually put in to break away from fielding four ships.


And that's my first thoughts for the good guys on the Light side of the Force.  Next up, the bad guys...
Posted by Stay On The Leader at 12:55