Our ongoing mission to find new and more interesting ways of enjoying playing X-Wing has led us back to the Heroes of the Resistance expansion for some new upgrades, and a rendezvous with an old friend: the Lothal Rebel.

The idea of pairing the Ghost with Biggs is about as old as the Ghost itself as replacing the Ghost's 0 Agility with the opponent having to shoot at Biggs instead is a pretty obvious synergy.  The only things I've really changed here is to integrate Rey crew onto the Ghost, which I think is a very powerful addition to this build.  During 2016 we often saw Dash/Ghost as a pairing and with 'Super Dash' coming in at 58 points it was just about what the best 42pt build was for the Ghost, which usually came down to deciding to spend the last 2pts on either Han Solo crew or Chopper as your pilot, with neither being a slamdunk superstar in the role.

Rey crew is your slamdunk superstar on the Ghost.  After spending a couple of early turns stacking Focus tokens onto the Ghost you've now got a huge gun that can flip about pulling red moves every turn (if you have to) while fully modifying your dice thanks to Fire Control System and Rey.

So far, though, there's nothing particularly special here.  Let's add the secret ingredient... 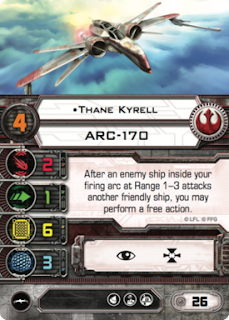 Thane Kyrell sits in this formation and supports the whole list with fantastic action economy - I usually hate statements like "Imperial Biggs" etc, but in this case I'm going to go ahead and say that in this list Thane Kyrell is "Rebel Manaroo".

Sitting your ARC-170 in close formation with Biggs and the Ghost you can guarantee that your opponent is going to have to shoot at Biggs, thus guarantee triggering your free action with Thane Kyrell.  It's like a Push The Limit you didn't have to pay for.  With Jyn Erso onboard the ARC-170 your extra action could be to throw Biggs another 3 Focus tokens, or to set a target lock and use M9-G8 to start nerfing your opponents attacks.

Alternatively, if the Ghost is running stressed and has managed to run down all the Focus tokens it had from Rey then Thane can top it back up.  Basically, there's always something good to do with Thane's free action that supports the rest of your squad in their key objectives - avoiding damage and dealing damage.  And the payoff if it all goes to plan, with Biggs nestled in behind the Ghost's Tactical Jammer at Range 3 of enemy fire?

You've got a Biggs with FOUR green dice and as many as FOUR Focus tokens!

Let's take a quick moment to talk about M9-G8, who might be a bit of a sleeper hit astromech.  While he can target lock friendly ships to help you attack I think most of the time it's best used to reroll incoming damage, especially in a list trying to keep Biggs alive!  The key rule you need to know is that as the defending player you will reroll incoming red dice before your opponent does any of his modification (target locks, focus etc) and that as a dice can only be rerolled once whatever you do with your reroll cannot then be target locked back up to a hit. 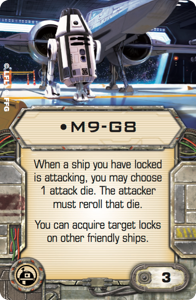 When your opponent has Focus the maths of M9-G8 are not particularly compelling as you've only a 25% chance of the rerolled dice coming up a blank that they can't turn into a hit.  When your opponent doesn't have Focus the maths get a bit better, though, and 50% of the time he's worth an extra point of damage you don't have to deal with.  Even in cases where they do Focus a rerolled dice back into a hit, though, this list is pumping out quite a lot of damage so removing a Focus from their defence dice might be just as useful in the long run.

M9-G8 works pretty well in this list but I think it doesn't really showcases his full potential.  I've got another list that does that, using Hotshot Co-Pilot Han Solo to strip Focus away from attackers then Shara Bey's ability to assign two Target Locks to double M9-G8's effectiveness.  It's also worth noting that M9-G8 does not have a range limitation on his ability once the target lock has been assigned, and as we know from cards like Manaroo and Emperor Palpatine that can be a great benefit.

M9-G8 could be an astromech to keep an eye on over the next few waves...

If you compare/contrast this to some of the more common Ghost/Biggs lists, usually with Kanan Jarrus in the Ghost and a docked attack shuttle, I think it's a good way to evaluate the strengths & weaknesses of the list.  In raw numerical terms this list is better at keeping Biggs alive as giving Biggs enough Focus tokens for all incoming attacks is better than reducing some incoming attacks by one red dice, especially if you can position him to be rolling four green dice each time (and don't forget M9-G8 is there to help as well!).  It's also got more raw damage output as you've got the ARC-170 on the table instead of a docked Phantom.

That's not really the whole story though. 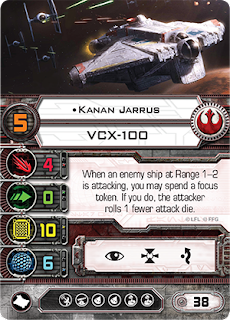 The key difference between the two lists is how the Ghost will fly, as they have pretty much opposite approaches.  Typically those Kanan Jarrus builds will spend more points on an expensive Twin Laser Turret and try to play keep-away with the opponent, while the Lothal Rebel is much more interested in heading towards the opponent and using his big front gun.  The Kanan build isn't just trying to use a turret it's also usually trying very hard not to make red maneuvers if it doesn't have to, because it needs to have its actions available to Focus up.  This Lothal Rebel is the opposite in that you've spent a bunch of upgrade slots in maximising your firepower while performing red maneuvers!

This has a big implication for Biggs because he simply can't keep up with the Ghost when it pulls that big 5 K-Turn - especially if he was hiding behind the Ghost to begin with!

Rather than trying to shepherd Biggs for as long as possible with Kanan I find there's usually a natural point where the Lothal Rebel 'detaches' and leaves Biggs to fend for himself (or at least, to fend with support only from Thane Kyrell and Jyn Erso).

This doesn't necessarily mean Biggs is thrown to the wolves when the Ghost leaves, but it's true that this list is at least as interested in removing opposing ships from the table as it is in protecting Biggs from all possible harm.  The photo above is a really good example of this, where I was playing the list against Paratanni.

Right before this round of shooting the Ghost had k-turned away to leave Biggs and Thane surrounded by enemies.  All three Scum ships opened fire on Biggs but as Thane Kyrell was able to donate three Focus with Jyn tokens (don't forget Thane uses both front & rear arcs for Jyn Erso!) it meant that Biggs only lost one shield!  My combined fire removed Fenn Rau in return and I went on to wrap the rest of the list up with the Lothal Rebel chasing Manaroo down in endgame.

Turn to the Dark(lighter) Side

I've really enjoyed the games I played with this list so far.  I think it has the action economy and raw firepower to win games but it also has some neat interactions within the squad and really requires good flying to keep your ships working together nicely.  Judging when and how to break the formation up is another challenge.  You want to frustrate your opponent with Biggs for as long as possible but there's going to be a point where the obvious 'keep the team together' move will just see your opponent take advantage of how restrictive your formation is, and that's the point to make the unexpected step and break the formation up to go onto the offensive. 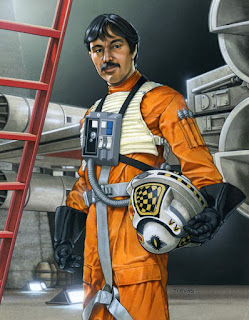 One of the neat things about the list is how resistant it is to bumping, which is especially useful as you're trying to run in formation where one unlucky bump might well concertina through your whole team.  Thanks to Rey, M9-G8 and Thane Kyrell not all your dice modification is dependent on actions, though - the Ghost can still draw down a Focus token, M9-G8 can still frustrate attacking dice and Thane can still use Jyn Erso to throw Focus tokens to Biggs after an opponent has fired.

That the power and action economy doesn't come so easily as it does in other lists makes it more challenging and interesting to fly (IMHO), although also obviously limits just how strong the list is.  On a good day, flown well, I think than can hold its own against the top lists.  But should anything go wrong then the way that your ships support each other can quickly become a weak point to exploit.

I think that's how X-Wing should be, though, so I'm happy to keep plugging away with this and refining my formation flying as I go.  I'll win some, I'll lose some (and lose some more than if I was playing Commonwealth Defenders, no doubt), but hopefully I'll continue enjoying playing the game as I do so.
Posted by Stay On The Leader at 10:03