Do a Barrel Roll!

This is going to be a very brief blog because there's not really a whole lot to say and I plan on not outstaying my welcome.

Vectored Thrusters and Turrets.  It's a thing.  Try it. 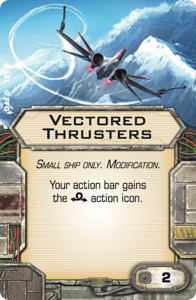 If you think of all the turrets that are around they're either short-ranged bubbles like Autoblaster Turret, Dorsal Turret etc, or they've got that 'donut' you don't want people to get into.  And when you think of the sorts of ships that get turret slots they don't really have much in the way of maneuvering options - Y-Wings, K-Wings, HWKs etc don't go in for arc dodging very much.

Vectored Thrusters fills this niche very nicely.  Whether it's with Autoblaster Turret on Kavil to make your deadly bubble nearly 3 times larger with barrel rolls, or whether it's Twin Laser Turret on Miranda Doni to keep your enemies at arms length or dodge out of arcs... Vectored Thrusters on turrets is a thing.  Your turreted ships don't care about where their arcs are - they don't need to boost around 45 degrees to get a shot they just need to manage their range to targets and go where opponents can't shoot at them.  Vectored Thrusters is very good at that.