Some Squads What I Wrote

That's a long time that's gone by since I last wrote a blog.  Almost 9 parsecs.  A long time.

Well, let's start back off slowly and I'll just share a few squads I've been playing with in all the time I've not been blogging, just to prove to myself I can actually still get round to sitting down and writing something... 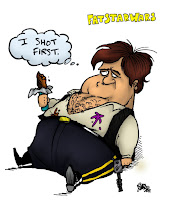 This is a squad for the Original Trilogy format, which only allows ships that appear in Episodes IV-VI.  It's one of the more common alternate tournament formats and a favourite among a lot of old school X-Wing players who want to remember the the good old days of TIE Fighters and B-Wings without having to deal with the likes of Dengar, Asajj, Fenn Rau or the Ghost.

As thematic and as fun as the tournament format is, it also has one pretty major problem: Fat Han is an utter beating.  Basically the tournament format includes one of the most dominant squad lists the game has seen (a fully loaded Han Solo), but most of the things that have since kept him from dominating aren't allowed, so in many OT tournaments Han just runs wild.

This squad was shamelessly built with one key objective: beat Han. 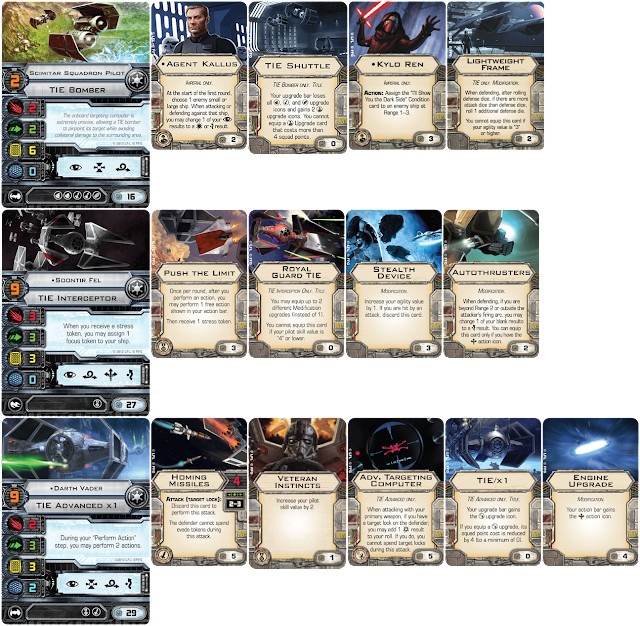 Darth Vader & Soontir Fel are two classic Imperial Aces so their inclusion isn't too unusual, and the magic in the squad is in the TIE Bomber.  I can't remember precisely where I stole this bomber build from, but I'm going to go ahead and make a wild guess and say Duncan Howard won a Hyperspace Qualifier with it in his squad (it could be another player in another event... anyway, I saw it win something and shamelessly stole it).

It's a FANTASTIC build for playing against a two-ship squad, especially one like Fat Han where the weighting in the opponent's squad is so heavily towards one of the two ships.  Kylo Ren lets you blind and debuff your opponent's main ship for large portions of the game, while Agent Kallus keeps your dice modded against them despite Kylo grabbing your actions.

The only other real piece of 'tech' in the squad was that I deliberately kept the bomber a cheap Scimitar so that I could take Homing Missiles on Vader and bring a bid.  I wanted to give Soontir a good chance of winning the bid against other PS9 pilots, and Homing Missile on Vader was likely to come in worthwhile against dodgy aces that my opponents brought.

And did it work?

I'm happy to report that it did!  I won the Original Trilogy tournament that I played in, and I completely ran rings around a Fat Han squad in the final.  Huzzah!

The Wretched Hive is my catch-all term for a family of scum squads that I've had fun trawling out from time to time over the last year or so.  It's intention is always the same - to feature janky combinations, odd control effects, and pilots or ships that you might not normally see played.

The reason it's been a theme I've constantly returned to is because:

The original Wretched Hive featured four copies of Attani Mindlink, before it was nerfed, but it laid down the template that has been followed ever since.


Two tractors beams, ion tokens from Palob, and stealing the opponent's tokens to boot.  The Concord Dawn Ace was in as the damage to actually remove opposing ships after the rest of the squad had finished toying with it.

On paper this is a janky pile, but I repeatedly found it just had so much annoying control that even strong squads would rapidly get tangled up and be unable to function.  Once the likes of Quickdraw or Fenn Rau got sucked into the spider's web their demise was just a matter of time!  Wretched Hive just had one critical problem: large ships.  Large ships make Tractor Beam and Ion Cannon sad and it was always an uphill struggle to take on the likes of Asajj and Dengar.

Would it have ever been good without four copies of Attani Mindlink powering it along?  Maybe not, and when Mindlink got nerfed to two copies per squad the Wretched Hive took a break.

I recently returned to the Wretched Hive format when I realised I'd never actually put a Kimogila onto the table. 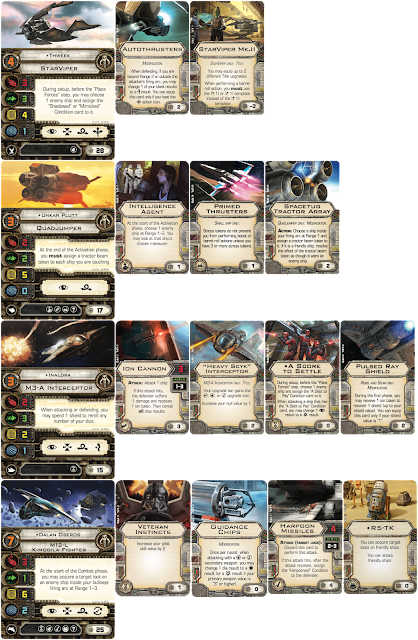 This modernised version of Wretched Hive reminded me how much fun I'd always had with it in the past, and I've had a couple of friends pick it up and come back with good results.  One put it onto the table against his store's best player only to be met with derision at some of the choices in the squad... then won 100-0.  Happy days!

And if you want to do it all a bit differently, maybe with a bit of Mindlink still there and some more green dice... 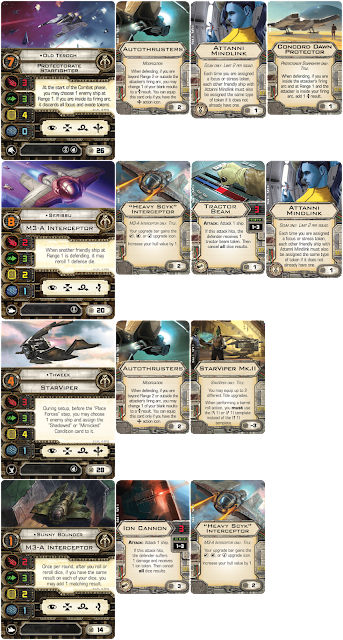 The spirit of the Wretched Hive lives on.  Wherever in the galaxy there is jank, wherever there is unloved pirates or luckless bounty hunters... there is a wretched hive waiting to be born.

This is my current project, which has gone through a few iterations to reach the form you see here... 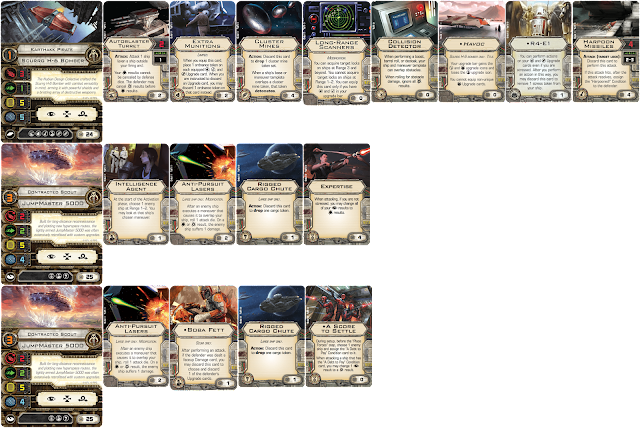 It started out with somebody posting a version of the squad that was just three Contracted Scouts with Expertise, Rigged Cargo Chute and Anti-Pursuit Lasers.  I think it was posted mainly as a joke, but it triggered a memory in me of a similar squad that I blogged about when Attani Mindlink was just beginning to explode in popularity, so I wanted to give it a bit more of a chance.

I tinkered with the triple Expertise squad a bit over a few games but ultimately kept struggling to keep the three Scouts from getting in each other's way because they all wanted to be doing the same thing.

Going back to the original Mindlink squad I saw that only two of his Jumpmasters were dedicated to bumping while the third brought a Torpedo threat, and that led me to swapping out the third Contracted Scout for a Scurrg bomber.  It immediately made all the difference in how the squad worked together on the table, and I've been enjoying it greatly.

Three ships, all tough, and a lot of hull and shield the opponent has to work through.  A lot of disruption and control effects, bumping and taking up space with Rigged Cargo Chutes and Cluster Mines, with all my ships able to S-Loop or T-Roll into position to sow destruction right in front of the enemy's advance.  Powerful offense in Harpoon Missiles, but also the added distraction factor of Boba Fett crew on the Jumpmaster, with my beloved A Score To Settle to help force the crits.

This squad was built from the ground up to be something I'd enjoy flying, and I've certainly succeeded in that, but there's always a little bit of me that still enjoys trying to build genuinely good squads.  I found one in that PS10 Rebel Alpha strike list I wrote about at the end of last year, and while I've not had that sort of success with this yet... yeah, I think it has potential, at least.

What's interesting is that this past weekend a semi-similar squad of triple Jumpmasters performed very well for Marcel Manzano when it took it into the Top-8 of a 100+ player Regional. 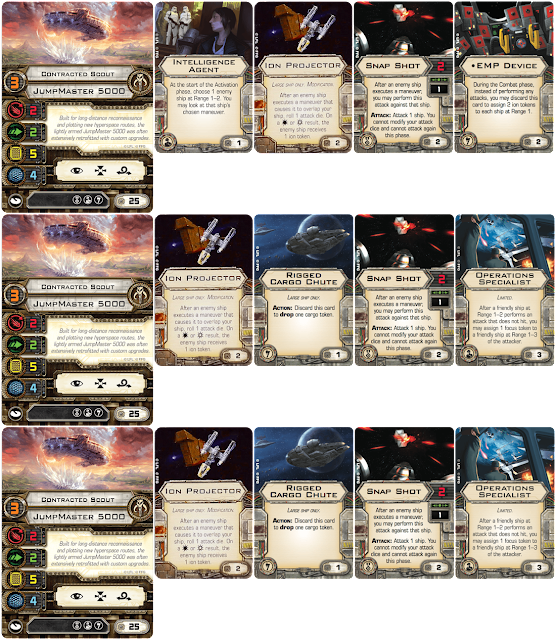 Same squad?  No.  But not entirely unrelated, and that gives me added confidence that the good feels I'm getting from my list aren't entirely a figment of my imagination.  The humble Contracted Scout may have lost its torpedoes and droids, but it's still a phenomenally efficient package, especially given it has an EPT slot to play with.