"Bounty Hunters. We don't need that scum" - Bringing 4-LOM and Zuckuss to the table

I've developed a nasty habit of only posting a blog when I've got War & Peace to write, which I'm going to try and break up a bit.  This time is going to be much shorter and just look at something I'm mulling over at the moment, namely Wave 8's new G1-A starfighter and specifically the two ace pilots; Zuckuss and 4-LOM. 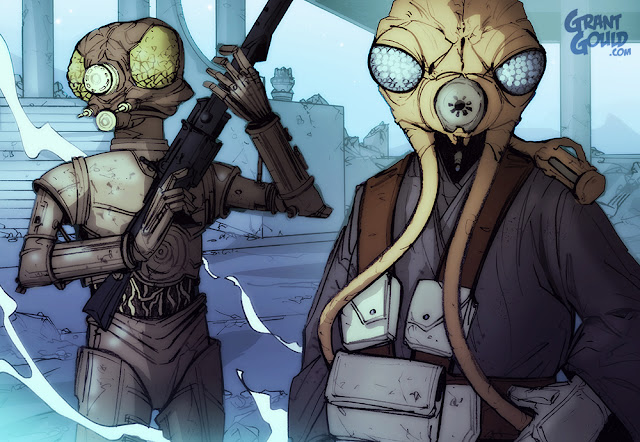 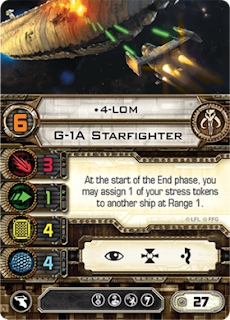 Just before Wave 8 was released a friend of mine played Keyan Farlander against me, and so when I saw 4-LOM he struck me almost immediately as something a bit similar.  The B-Wing and the G-1A are very similar basic ships in terms of both their stats and dial, and both Keyan and 4-LOM are pilots whose abilities 'unlock' a lot of the powerful red maneuvers on their respective dials by giving you a positive benefit for the stress you receive.

My initial approach to building a 4-LOM ship was that I was pretty sure I would want to be pulling red maneuvers most turns in order to build stress to pass off onto opponents.  This fit into the profile of being a tight-turning close quarters fighter, and it also made sense for 4-LOM as I would need to stay close to the enemy to hand them my stress with 4-LOM's pilot ability at the end of the turn.

This is kind of a stripped-down basics for the 4-LOM build, in that many of the upgrade slots are blank.  It's being driven by one key fact, which is that pulling all those red maneuvers will leave me unable to take actions: that means I want both Outlaw Tech and Fire Control System to give me Focus and Target Lock tokens without spending actions.  Outlaw Tech is a crew card that I think has really found it's perfect spot in the G1-A, which has some of it's most useful maneuvers coded red.  If you've any intention of using those maneuvers a lot, which the stress-loving 4-LOM is going to do, then the Outlaw Tech becomes something close to compulsory, I think.

Focussing on performing red maneuvers also means that I probably don't care much about the Mist Hunter title for this version of the G-1A.  Adding a Barrel Roll for just 1pt is usually a great bargain and fits the 'close quarters' profile of the build, but if I'm taking red maneuvers then I can't use my Barrel Roll action.  I'm not saying Mist Hunter is bad for 4-LOM, but it's something I'd only take if I had a spare 1pt floating around at the end.

As well as not taking the Title I don't think there's a Modification that I particularly want for this build, but there are a couple of optional extras that I think you can bolt on without investing a ton of extra points.  Both Lightning Reflexes and Inertial Dampeners open up more options for a one-shot special manuever that will also stress you.  The only thing really holding me back from taking this would be that 4-LOM only has a middling pilot skill, so there won't be much that has changed between you programming your dial and having to decide if you need to change your move.  Either works and they both have their strengths and weaknesses.  If you take the Inertial Dampeners then it does leave you with the Elite Pilot Talent slot open to add either Adaptability or Veteran Instincts to push your Pilot Skill up a bit.

What you get with this build is a 31 point fighter that dives in close and loves to rumble with opponents, handing out stress tokens to slow the enemy down then turning hard to stay on their tail.  He won't survive long if he tries to take on the whole enemy fleet by himself, but the stress will help him to prey on any lone ships that strayed away from their pack.

It's possible to spend a little bit more on 4-LOM if you really want to, and most of these higher cost builds are about adding Advanced Sensors into the System slot, which allows you to take an action before your red maneuver gives you stress.  With the addition of that action then two obvious directions open up, depending on which action you want to perform:

1) you can add an Evade action before your stress kicks in after the red maneuver, and you can compensate for the loss of your Fire Control System by playing something like Lone Wolf or Predator in your Elite Pilot Talent slot.  If the basic 4-LOM build isn't too durable then adding the Evade actions can definitely help with that, especially with Lone Wolf to help as well.

2) you can pick up the Mist Hunter title for that Barrel Roll and extra close quarters maneuvering.  Being able to barrel roll before you perform a hard turn can make a big different to where you end up and whether somebody is in arc or not.  The downside for going after this highly maneuverable build is 4-LOM's low pilot skill, which you could compensate for by playing Veteran Instincts to at least get up to PS8, although that's still not enough to get the jump on the real aces doing the rounds. 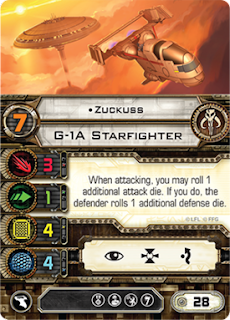 I was immediately attracted to exploring 4-LOM builds so it took me a while to come around and think about playing Zuckuss instead.

On the face of it his ability to add a dice to both the attacking and defending dice isn't that hot - you've got an extra chance of rolling a hit but they've got a chance of rolling an evade, so it doesn't add up to a whole load of extra damage.  Where this symmetry is broken is if you can use this ability when you've got a better way of modifying your dice than the defender, so that you've more chance of generating a hit with your extra red dice than they do an evade with their extra green dice.

The table below shows the difference in damage between rolling 3 dice vs different Agilities, or 4 dice with Zuckuss' ability but the defender getting an extra dice as well.

Without a Target Lock or Focus then Zuckuss barely adds any damage, but ff you can gain an advantage over the opponent in dice modification then Zuckuss' ability makes a lot more sense.  Firing with a Target Lock against a ship with no Focus tokens is worth an average of 0.75 extra damage, although this is affected by the defenders Agility.  with Zuckuss really paying off most against the higher Agility opponents who you weren't otherwise going to hit, dealing an extra 0.9 damage.  If you can double-down on dice modification with a Focus AND Target Lock then Zuckuss becomes a more reliable 0.6 additional damage per shot against opponents of any Agility.

There's multiple options for giving you the extra action efficiency to outgun your opponent in terms of dice modification, with perhaps the most obvious being K3 Security Droid, Fire Control System to add target locks, or Predator/Dengar to otherwise reroll your dice.  This leaves you free to perform a Focus action and double down for maximum effectiveness with your extra dice.  With Zuckuss adding extra dice you really want a Target Lock that can reroll any number of dice over Predator or Dengar, but that decision may be made by other factors.

You've effectively got a choice of three places you can get the modification from (EPT, Crew, System) so what other upgrades you want may be a factor, and also that although Predator and Dengar allow you to reroll fewer dice than a Target Lock they don't require you to focus onto a single target, leaving you free to hit targets of opportunity as they present themself, which may be better for a mid-PS pilot who can't really reposition easily with his actions.

With the G1-A's dial having so much red the decision of where the Focus comes from could matter as well, because it may still force your hand to play Outlaw Tech.

This is a really basic Zuckuss build, with some upgrade slots open to be taken.  Zuckuss isn't quite as wedded to running red maneuvers the whole time as 4-LOM is so the Mist Hunter titles makes a bit more sense.  If I was looking to beef this build up some more then I'd say a Hot Shot Blaster packs a mighty punch with Zuckuss' extra dice and modifiers behind it, but the reason I'd probably avoid playing it is that you're adding a lot of extra cost to the G1-A without hugely adding to damage or survivability.  I think the G1-A, for both 4-LOM and for Zuckuss, is something to keep pretty cheap and efficient without trying to overload it.

One other build I like for Zuckuss is to turn him into a bounty hunter who specifically preys on the high agility aces by bringing 4-LOM to the fight as a sidekick to prevent them from spending Focus or Evade tokens and push your extra damage through.  What's extra-powerful about this is that it's one of the few ways of forcing the situation where your opponent doesn't have a Focus to spend on defense, which is a big boost to Zuckuss' extra dice damage against the high agility targets.  You can then go even further and take advantage of your Evade action on the G1-A to play Juke as well! 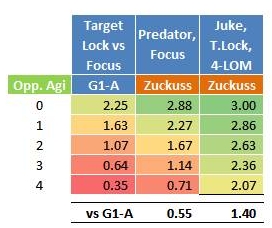 This ace-hunting loadout costs the same as the Predator & Outlaw Tech version of Zuckuss but deals more damage much more reliably, especially against the high agility targets like Soontir Fel.  But that extra firepower comes at a price, namely that you are now trying to avoid red maneuvers rather than trying to pull them, as you need to be able to make an Evade action to use Juke, and also that 4-LOM will hurt you when you use him to strip Focus off the enemy.

Ionising yourself with 4-LOM isn't a lot of fun, but if you think you're facing Soontir Fel then bringing a pilot who is an expert in nailing those fast-moving Interceptors could be helpful.  Just, as with 4-LOM, the hard part of chasing aces with the G1-A is that your pilot skill is too low.

What I see in the G1-A, with both their aces, is a ship that is looking to rumble, but also a ship that definitely needs help to make it effective when it's stressed because so many of the best maneuvers on the dial are red.  Cards that add efficiency without actions are prime for the G1-A aces and in Outlaw Tech, Fire Control System and Predator I think you get the core of the dice modification that you need.  Advanced Sensors unlocks a host of more flexible builds but it adds cost that I'm not sure the G1-A justifies.

I still prefer the cheaper 4-LOM for his stress-giving ability but there is a signficant boost in damage output for those prepared to make Zuckuss work for them.  I said in a previous blog that I would deliberately be trying to experiment with asking new questions of my opponent, and that's why I'm going to be giving 4-LOM a run out first. I'd love to hear what you've come up with for either of these guys, though!
Posted by Stay On The Leader at 15:17