No Strategy, Just Showing Off - my X-Wing repaints

I've been throwing down some pretty heavy duty blogs of late, looking at the basics of X-Wing dice.

I've been exiled to card games for the past 20 years, but way, way back in my misspent childhood I was deep into minatures gaming, Games Workshop specifically, and spent many an hour painting my armies for battle.  I was never as good as my brother, who has some fantastic White Dwarf-ready paint jobs to his credit, but I at least knew one end of a brush from the other.

After shuffling for 20 years, X-Wing has reawakened this latent painting gene once more, and I've been enjoying the quiet calm of the painter's table. Yes, this blog casts me as something like the Family Guy 'look at my kids' guy, but this is my blog so I'm going to do it anyway.

I started with probably the most common X-Wing repaint: Poe Dameron.  I'd seen so many of these repaints on Reddit that when I went to my Store Championships I was genuinely amazed that I was the only person in the room flying a black T-70! 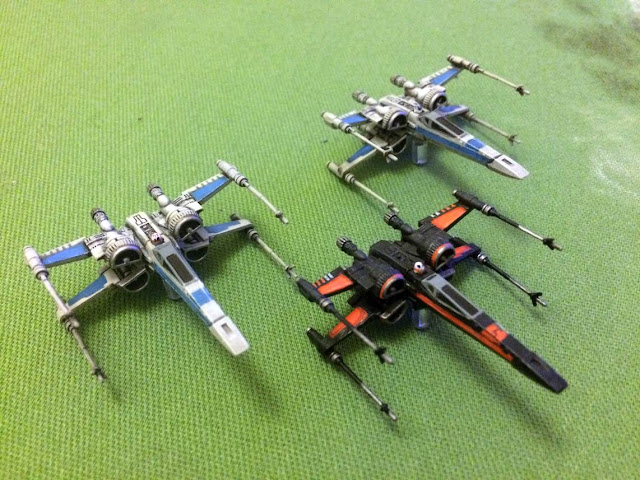 I followed Poe up with subtle repaints of two other T-70s to complete my Triple-X squadron of "Blue Ace" and "Red Ace".  If anything these repaints were too subtle, as although virtually the entire models are repainted you can't really tell unless you put them side by side with a T-70 fresh out of the box.  When you do so it;s obvious that there's a lot more contrast in the repainted ones, and more detail, but it's easy to miss. 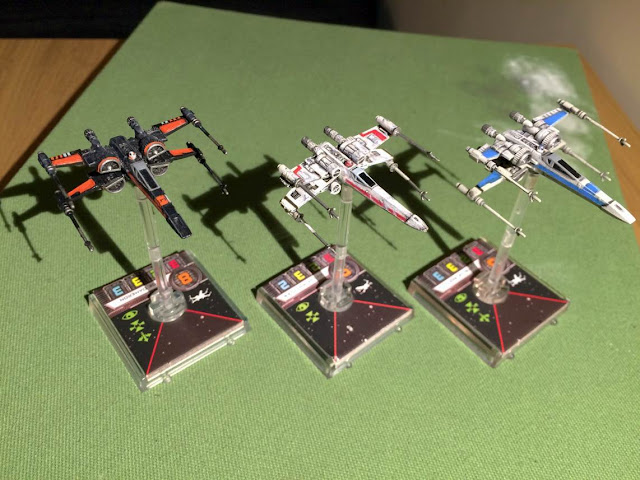 Then I started flirting with using Wedge Antilles so I decided to spruce up one of the original T-65 X-Wings.  This time I went for a dirtier & more battle-worn approach, and I also wanted to lighten the ship up a lot to make it stand out from my T-70s.

With my X-Wing squadron complete I turned my attention to twin projects - converting some of my spare Imperial ships to fit the First Order colour scheme as I like the TIE/fo fighter a lot, and going a bit off-piste with my YT-2400. 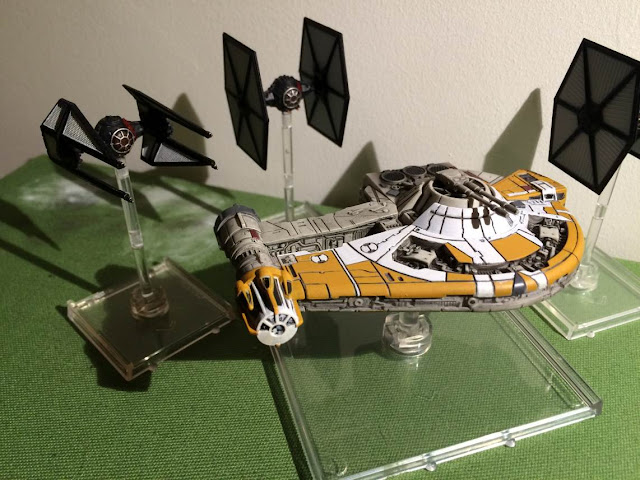 So far the paint schemes I've done have been adhering really closely to the films, and they'd all been small ships as well.  I really wanted to tackle something bigger, and also to try something a bit more creative, but I was too attached the Millenium Falcon to dare that for my YT-1300, same for Slave I or the Lambda Shuttle.  Converting the YT-2400 was the perfect middle ground so I decided to just plunge in without really planning anything through.

While busy working through my YT-2400 I pressed on with some Imperial fighters at the same time, first with a First Order makeover for Soontir Fel, here before and after I added a grey 'bloodstripe'.  I felt like a red stripe would stand out too much against the monochrome First Order colour scheme so went for grey, and I'm happy with that. 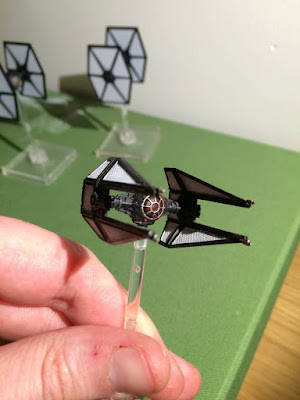 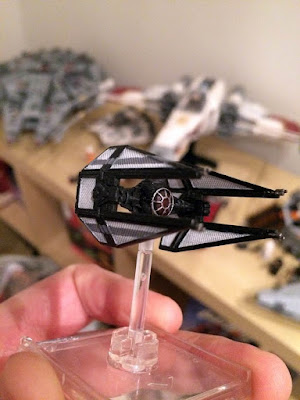 One of the trickiest parts of the First Order repaints are that the white solar panels aren't actually white on the TIE/fos, they're like a light grey and darker around the edges of the panels - matching close to that was pretty tough, 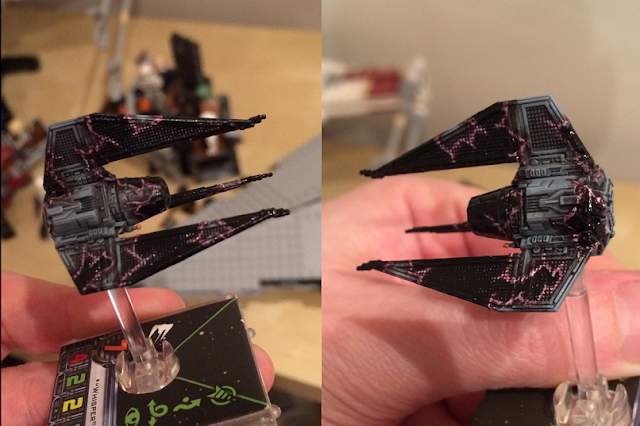 Next up was the inevitable TIE Phantom repaint.  There are so many AMAZING TIE Phantom repaints around, with the arcing blue lightning effect, that I just wanted to avoid any direct comparison and try to make mine look a bit different.  I went for a patchy cloak/decloak effect rather than the 'Stargate' style straight line that I see a lot of people use, and I also toned the colour down to a deep red/purple.  I'm pretty happy with the outcome, actually.

One thing I tried that was a bit different is that I decided to use a gloss varnish over the cloaked sections, which makes it very obvious that something is different when you look at the model.  It didn't come out in those pics above, but this next one shows it off a lot. 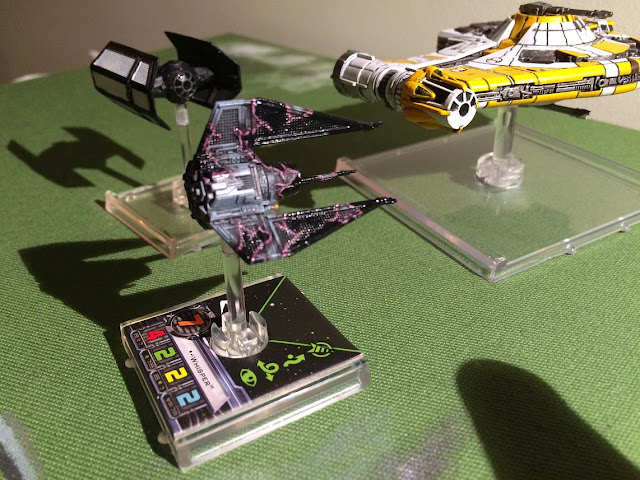 And in the background?  Yep, I'm still working on the YT-2400, and now painting up a TIE Advanced to join my First Order fleet.  A painter's life is never done! 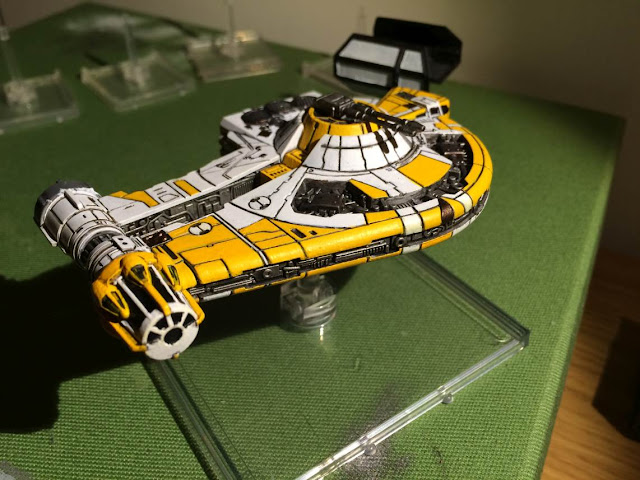