So you know how George Lucas went back and basically fucked with everything in the original trilogy by putting cartoon lizards and 'wacky' droids and reprehensibly bad CGI Jabba the Hutts (not to mention 4th wall-breaking Boba Fetts) into his Director's Cut? 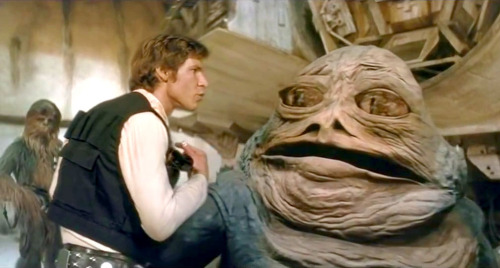 Instead, think of this as being more like the DVD Extras, as all I'm really going to be doing is sharing with you a few more tricks for better flying that are really just that little bit more complicated than those I put in my first blog.  I also asked veteran pilots to share more tricks with me and some did, so I'm including those as well.

So, without waiting for Greedo to shoot first I'm going to pick up where I left off in my last blog and plunge right on with Tip 7...

7) The move ruler is half a ship length wide: Barrel Roll Edition. 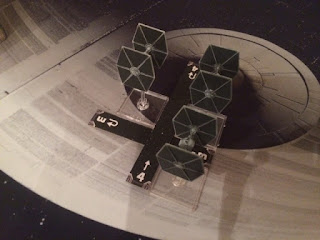 So last time I explained that the rulers you use to measure out your moves are half a ship's base wide, and how that actually makes them useful in planning out tight starting formations, like so...

Reading between the lines this means that you can 'steal' half a ship length forward with a Barrel Roll if you put the ruler at the front edge of your ship's base, then move your ship so that the back edge of your base is lined up at the end of the Barrel Roll.  And if you can steal half a move forward then you can also steal half a move back if you do it the opposite way.

This might not sound like much but the difference between a Barrel Roll as far forward as possible or as far back as possible is a whole ship length, and that could be the difference between ending your turn in range of a shot or not.  And combined with other movement actions like a Boost (with Push To The Limit meaning you get to do both a Barrel Roll and a Boost in one turn) this can start to add up to an awful lot of fine control over exactly where you finish your move. It's actually a key element of many of the 'Arc Dodger' competitive squads (which is a concept I'll talk about in more detail in a future blog), but if it's winning tournaments then clearly it's a trick worth learning.

Aside
So, in googling 'Do a Barrel Roll' to find a picture from Starfox to illustrate this tip with I happened to find out what happens when you google 'Do a Barrel Roll'.  The guys at Google are real nerds.  I like that.  Anyway, it distracted me so much I forgot to get a Starfox picture for the illustration so you'll have to make do with just these functional photos of it actually happening... 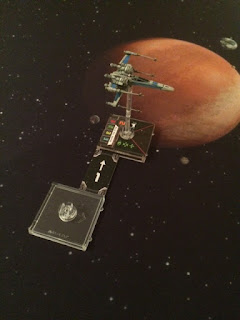 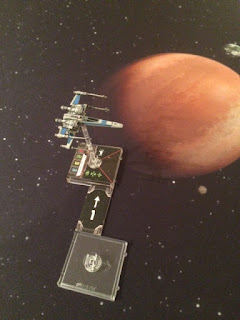 I hadn't heard of 'the rule of eleven' until a veteran pilot ('Heptara' on reddit) replied to my first blog by pointing it out.  The 'rule of eleven' means that the two squad deployment zones are far enough apart at the start of the game that the ships need to move at least eleven ship lengths forward (between them) before they're close enough to start shooting at each other at Range 3.

That's important information to have at your disposal, the question really is: what you want to do with it?  And what do you think your opponent is going to want to do?

If you've got ships loaded up with Secondary Weapons that are particularly lethal at Range 3, like a Heavy Laser Cannon or Twin Laser Turret, then you might want to try and force your way just inside that eleven ship lengths to get a shot.  This means if you assume your opponent wants to close the distance quickly and is going to select two straight 3 Forward moves then in two turns he's going to have come forward 8 ship lengths, so you only need to move forward by 3 ship lengths (call it three and a half to be in the safe side of being in range).  So you actually only need to drift forward slowly, maybe even Barrel Rolling backwards if you can, to try and guarantee having a turn of combat at Range 3.

On the other hand if the tables are turned and your opponent holds the advantage at Range 3 and you want to get in close you might, perversely, choose a slightly slower move to leave you just outside Range 3.  Then on the next turn you can jam your foot to the floor and scream into close range.  Against some of the most powerful Secondary Weapons, like Twin Laser Turret, this can completely take them out of the equation as they can't fire at Range 1!

Eleven ship lengths sounds like a lot, but remember that last turn I showed how the Millenium Falcon can move up to nine ship lengths in one turn (with it's large base and an Engine Upgrade) - if you're moving 9 ship lengths it only needs a slow forward move from your opponent to be in range from the very first turn!

Now a lot of this kind of assumed that the ships were lined up exactly opposite each other, and if you're slightly off to the side of your opponent then you'll have to start taking into account that the range ruler is going to heading out diagonally and you may need to move more than eleven ship lengths.

Nevertheless it's a really useful thing to know about, and if you want to read about it even more than it's covered in great detail (with some awesome examples) on this blog.

Now this is where we start to get pretty tricky - I'm going to be combining things we learned across  three different points to show you something that might just, one day, win you a game.  It's the X-Wing equivalent of how sprinters will dip for the line at the end of a race because every inch counts.

Do you remember "3) Turns make you go 'faster'" from my last blog?  Ok, good, but for those who don't here is the illustration again... 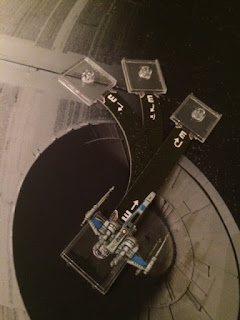 As you turn in a shallow bank your ship flies forwards three base lengths, then turns 45 degrees to the side, with the back corner roughly level with back of a 3 Forward ship base.

Now, do you remember "6) Rulers are half a ship length wide"?  That's where I showed you that you need to line up in a slightly spaced out formation to avoid your ships clipping each other's bases when they turn, because they take up more lateral space. 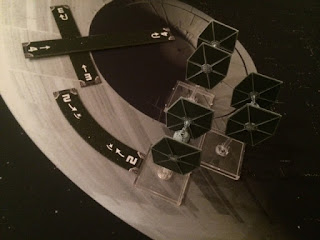 A bank really IS faster than a straight, and banking away from an enemy can actually make you closer and give you a shot!

This is because when you shoot you measure the range from the closest point on the two bases rather than from the centre of the base, or the front, or the model itself.  You can 'cheat' this system a little by turning your base to 45 degrees, which then pushes your the front corner point of your ship's base forwards by a quarter of a ship length.  A quarter of a ship length ain't much, but it may be just enough.

And now you can combine that knowledge with 'The Rule of Eleven' and use it as another way to sneak inside of shooting range when the rule of eleven means you kind of know how close you're going to be.

It's also definitely worth knowing when you have ships with a Boost action, because you may know even know what the opponent has done with their move before you have to decide whether you need to use the 1 Bank or 1 Forward ruler for your Boost!

Notice also that it even works with "4) Big ships are inherently faster than small ships" because when a big ship turns its base diagonally it gains double the distance towards the target because the base itself is bigger - a quarter of the Millenium Falcon's base is half of another ship's base, after all.

This will be the last one from me for now.

A lot of these tips have been about learning the geometry of how spaceships fly in X-Wing but this one is a bit more basic and I'm really just trying to teach you from my own mistakes before you make them yourself (hopefully, at least... you may be well ahead of me in the mistakes count by now!).

Firstly, in my earliest games of X-Wing when I wasn't busy flying my TIE Fighters into every rock I could find I was slamming them into each other as well.  It turned out that while I was pretty bad at avoiding the obstacles I could see on the table I was even worse at avoiding the obstacles that weren't there yet - namely the other ships I'd just programmed moves for.  Time and again I'd send two ships from different places on different moves... and having them wind up occupying the same space, bumping into each other as they did so.
This will come with experience, but as you start adding more and more ships to your squad it gets harder and harder to remember where you've sent them all.  When in doubt: check the maneuver dials you've already put down and change them if you need to.

Secondly, the order in which ships move is very important as well but when you're struggling to take in everything else about flying this can be a detail you forget to think about.  When you look at the table remember that some of those ships aren't going to be there when your ships come to move - so long as you've got a higher pilot skill the other ship will have already got clear by the time you come in.  This means it's sometimes perfectly OK to program in a collision course if you know that the ship you're potentially colliding with will have gone by the time you get there.

When you're programming a move I've found I need to make a point of stopping and thinking for a second: which ships will have moved, which will still be there?  Am I definitely good to go?  Ok, program the dial.

So anyway, hopefully you've found these tips useful and they help you go from Vader's clumsy wingman to something more like this...