On one level X-Wing is a really simple game.  The rules are quite light, there's not many pieces on the table at once, the turns flow quickly, and you can just push your spaceships around and roll dice and make 'pew pew pew' noises while you enjoy recreating all the excitement of a Star Wars film on your tabletop.  For a lot of people this is exactly how they experience X-Wing and there's nothing wrong with that at all. 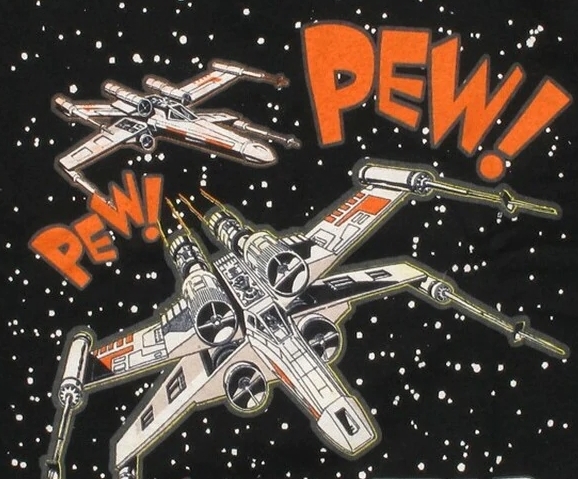 On another level, though, X-Wing is a very complex game.  If you start to take the game seriously and want to try and get 'good' at X-Wing then under that surface simplicity there's actually quite a lot going on.  There's dozens of ships, with dozens upon dozens of pilots for those ships and dozens upon dozens of upgrades you could equip that would meaningfully change how those ships perform on the table.  How do you begin to approach understanding how to play X-Wing strategically - what your ships actually do, how your opponent is going to try and beat you?

How do you maximise your chances of winning at any given time?

These are some of my favourite topics to think about when I decide to devote a lot of my time to a game.  When I played Magic: The Gathering in the 1990s I was around when these sorts of game concepts were being properly discussed and dissected for the first time as a nascent internet pulled a scattered group of very smart people together and turned them into a community for the first time.  The edition of The Duellist magazine that introduced the theory of 'Card Advantage' to me had more copious highlighter use and frantic notes in the margins than any of the textbooks I was supposed to be reading for my degree (I flunked my degree but got to play on the Pro Tour, so the writing was on the wall).

Seeing through the surface of a game to the mechanics underneath is what keeps me playing games and it's stayed with me since I left Magic.  I had the same obsession when I played Netrunner, and I contributed a few defining strategic concepts like breaking the game down into three clear phases, and my way of understanding how ICE worked for the Corporation player.

I want to try and turn my hand to X-Wing now, prompted by a couple of different thoughts and conversations I've had which eventually coalesced in my thinking to be two sides of the same coin. 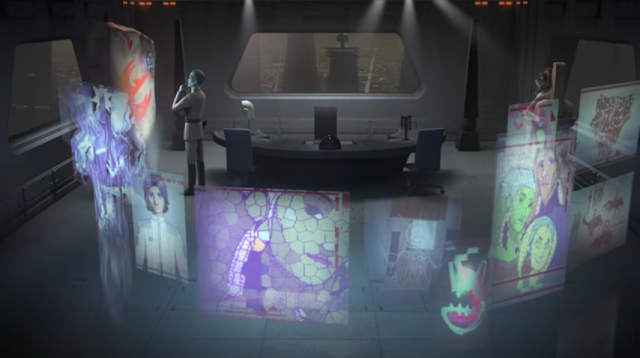 The first of these came after I was following the results of the 'Ace or Not' survey by 5050 Saint, which asked players to decide if they called each I5 or I6 pilot an 'ace' or not.  I sniffed that there might be a blog to write about the findings of the survey so I downloaded the results and did a few things to them in Excel to see if any trends popped out.  What I found was quite interesting, because there seemed to be a very strong correlation between the Cost/Hit Points ratio and how many players considered them an ace (eg. Rear Admiral Chiraneau costs 76 points with 16 health, 4.8pts per health, while Soontir Fel's 3 hit points cost 55pts at 18.3pts per health). 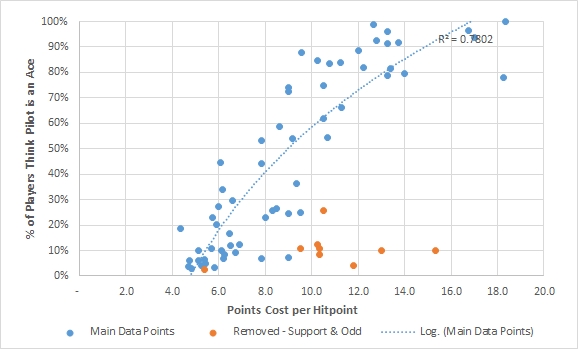 This provoked an interesting thought in my head.  Most of the time when players argue about what constitutes 'an ace' it's about abilities and attributes of the pilot and their ship - can they double reposition, are they high initiative etc.  The strong connection between Ace % and their cost per point suggested the relationship may actually run in the opposite direction and instead of ace status being about what the ship CAN do, it's about what they CAN'T do - afford to joust.  Maybe 'aces' are ships that are too expensive/fragile to be flown any other way.

The second thing was a conversation that I'd had with Oliver Pocknell while we watched TIE Aggressors win the Coruscant Invitational, the closest event we had to a World Championship in 2020.  The impact of turrets, and wider firing arcs in general such as the Auzituck, have been on Oli's watch list for a while and the Aggressors picking up a big win brought it to the fore again.  Watching the TIE Aggressors do so well made me think that the turrets weren't a strategy in themselves they were actually a part of the Aggressor's jousting arsenal, enforcing that opponents couldn't avoid engaging with the Aggressor's efficiency at trading dice.

Put those two ideas together and we get that 'aces' are jousters that couldn't afford to joust, and 'turrets' were just a form of jousting.  I started to see a larger picture of X-Wing strategy appear, which is what I want to share in this series of blogs.

Fortunately, strategic thinking for the X-Wing Miniatures Game Second Edition didn't start with me and I can stand on the shoulders of giants.

Long before I was even playing X-Wing at all some really smart people had been developing their understanding of how the game worked and sharing it with the world, going way back before the start of Second Edition into First Edition.  One of the most enduring strategic concepts In X-Wing was that of the game's strategies being founded on 'three pillars', which I believe was first coined by then World Champion Paul Heaver in 2015.

The Three Pillars of X-Wing said that all the ships in the game could be defined by assigning them to one of three different groups, there were Jousters (tough ships that like to fight), Arc Dodgers (fast but fragile ships) and Turrets (ships with 360 degree firing arcs that Arc Dodgers couldn't safely approach). 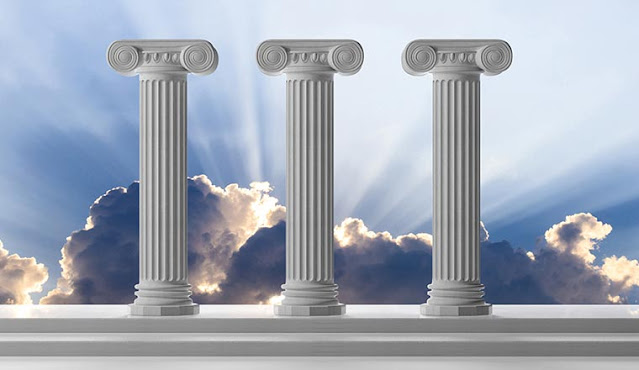 The Three Pillars theory then went one fiurther than this and said that, in general, the pillars aligned to spots in a Rock-Paper-Scissors relationship between each other.  There was a general expectation that Arc Dodgers would beat Jousters by avoiding being shot at, Turrets would beat Arc Dodgers by not allowing them to avoid taking damage and punishing their fragility, but Jousters would beat Turrets by just being too strong and tough in a straight fight.  That was roughly where X-Wing was during 2015's metagame, with TIE Swarms & B-Wings being beaten by triple TIE Interceptors, while the Interceptors got picked apart by Y-Wings and big turreted YT-1300/2400s.  (If you're not familiar with this period you can take a peek at it through this blog I wrote a couple of years ago). 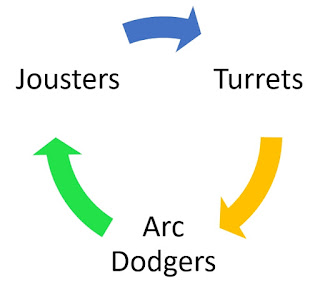 In truth it probably wasn't long after the Three Pillars theory became widely accepted that it stopped being accurate.  The addition of Autothrusters almost single-handedly switched Turrets > Arc Dodgers on it's head, making Arc-Dodgers almost bulletproof to most Turrets.  Even so, many players continued to talk about the Three Pillars for the remaining years of First Edition and every now and then you'd see discussion about adding a fourth pillar for something that was being successful but didn't fit into the Three Pillars theory, such as 'Bombers' or 'Support'.

But despite the obvious flaws the Three Pillars theory was so immediately graspable that it endured right through to the dawn of Second Edition, with Zach Bunn using it as the basis of his introduction to X-Wing strategy for new players joining the game with the Second Edition release.  The Three Pillars have stood the test of time. 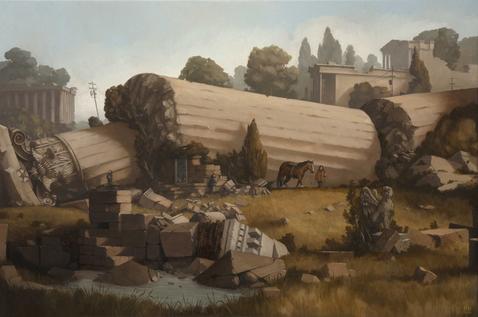 But there's a lot about the Three Pillars of X-Wing that I don't like.

First of all, I don't like that it actually stopped being right several years ago, at least in terms of describing a Rock-Paper-Scissors metagame even if the concept of categorising ships into these pillars remained broadly effective.  I also don't like that it struggled to cope with hybrid strategies that became more and more popular - where did you class the likes of Super Dash, who was a Turret that could Arc Dodge, or Jumpmasters who could Joust and had Turrets?  If ships like these weren't a natural fit into the Three Pillars, and then we needed to talk about adding fourth or fifth pillars for things like Bombers or Support, were the 'Three Pillars of X-Wing' just a small part of the story?

More importantly I have a fundamental problem with the fact that the Three Pillars assigned its labels to a ship during squadbuilding.  Three Pillars says "An X-Wing is a Jouster" or "a Fang Fighter is an Arc Dodger" and this completely ignores how roles could change once you got to the table and saw your opponent's squad.  I remembered listening to Jesper Winstrom talk several times about his CLT Jedi squad on the 186th Squadron Podcast, and about how often he would joust with his supposedly fragile Aethersprites on his way to smashing into the top cut at Worlds 2019.  Your ships spontaneously changing roles like this isn't something that the Three Pillars allows for and yet it's clearly a valid and important part of X-Wing strategy. 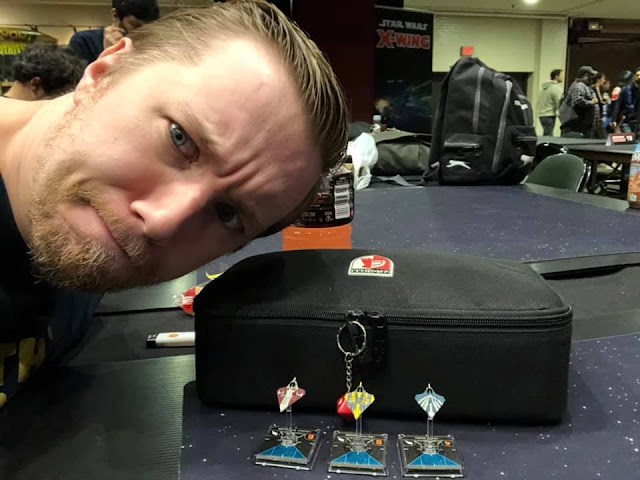 And there was nothing in Three Pillars' Rock-Scissors-Paper theory about what happened when a Jouster met a Jouster.  Were you doomed to just fly at each other dumbly and let the dice pick a winner?  If an Arc Dodger squad met another Arc Dodger would you fly perpetually in circles around each other?

For all that the Three Pillars did right by providing a basis for understanding different ship roles in a really accessible way I think it doesn't really do much to help you understand what you have to do as a player once you get to the table.

I think we can do better.

So Three Pillars is rubbish?  Whoa, whoa, whoa. There’s still plenty of meat on that bone. Now you take this home, throw it in a pot, add some broth, a potato. Baby, you’ve got a stew going... 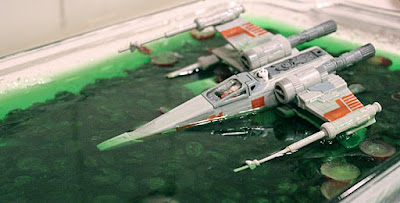 Over the next couple of blogs, hopefully with some of your help, I'm going to try and cook up something new: a strategic framework for how to think about X-Wing strategy on a wider scale.  A framework for thinking about what ships do on the table in the way that the Three Pillars originally laid out, but which embraces that these roles can change dynamically - both from game to game and opponent to opponent, but also often changing during the course of a game. 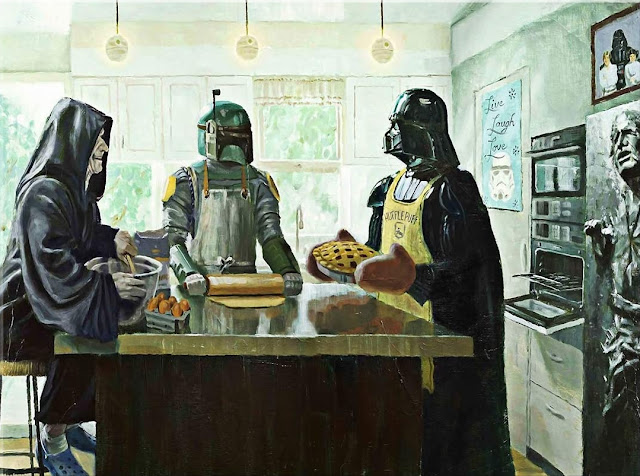 I want to replace the Three Pillars of X-Wing's Rock-Paper-Scissors dynamic with a flow chart, or decision tree.  I'll cover this all in more detail in later blogs, but this is broadly the shape that I foresee:

And within that framework lies how to understand how your ships should behave in the game you're in, and against the opponent you're facing.  It would explain the need to reevalute those roles during a game and change approach accordingly, and it would embrace how to squadbuild with both your desired purpose in mind and to plan for how to respond when events mean you can't take up the role you want.

I've been mulling this over for a while and I've got a pretty good idea how I see this going but I don't assume that I'm going to get it all right first time.  Hopefully that is where you come in, dear reader.  I'm going to forget about things, I'm going to misclassify things, I'm going to have cause-effect relationships backwards, and when that happens I want you to tell me so we can fix it together.  They say too many chefs spoil the broth, but I don't believe that.  And the same people also say 'many hands make light work' and they can't have it both ways.