"I need someone to show me my place in all this" - Wave 12 Ships: should you buy them, and what are they for?

The holiday season is upon us, and FFG are bringing us a bumper supply of presents as all five ships of the combined Wave 12 & 13 are hitting the stores on December 7th.

I won't update my buying guides until the ships have had a bit of time to settle in, but if you're wondering what the ships are going to be good for let me share my two cents.  Please bear in mind I've played as little of these ships as you have, but here are my best guesses...

The original Phantom shuttle has very rarely been seen without the Ghost as the main thing it brought to the table was the chance for a second round of attacks.  The Phantom II feels like they've tried to change that by giving you a shuttle that does more undocked than docked, and which you'd actually want to put on the table as a standalone ship.  There's some really interesting effects and upgrades in here; Maul and AP-5 give you some new ways of clearing stress, Chopper could be the new go-to mech for keeping a key ship alive, while Flight Assist Astromech promises to be a great boon to all the Rebel ships with a mech slot.

It's almost certainly worth grabbing one of these shuttles, and if that Flight Assist Astromech turns out to deliver on its potential you could be going in for quite a few more.  I've not really got any firm plans for the Phantom II itself, but there's a couple of squads sitting in my drafts waiting on those juicy juicy upgrade cards...

So this is an interesting remix of the Kanan/Lowhhrick model (probably a little worse) and it highlights how Maul's stress removal can help you out.  This Ghost can take an Evade with Advanced Sensors, throw a 5k, hit you with the big main gun with Ezra's focus mod, clear the stress, spend the evade, hit you with TLT and mod that with Maul and Ezra again... then be stress-free at the end of the turn to do it all again!

I really like how Maul can not just add damage but also open up a restricted dial by clearing stress.  Do you need Advanced Sensors?  Depends how many red moves you're planning on doing.  Possibly not, and that might free points up for Lowhhrick... FCS on the Ghost and Rey for Lowhhrick?  Could be.


*Translation: "I've got a bad feeling about this"

The BTL-A4 title works very nicely with Flight-Assist Astromech as they both limit your turrets firing out of arc anyway.  This allows you to field four robust ships with control effects tacked on, and given how well the 3 & 4 Wookiee lists are doing at the moment I think this hybrid (Y-brid?) could be a genuinely strong squad.

I've already written about the gunboat in detail so I won't repeat myself except to say that a month or so on my opinions haven't changed at all.  Definitely not bad, but I'm not sure it's top-notch tournament strong.


A lot of players decided to buy the Gunboat years before it was even announced that FFG were making one, but if you're not in that group I'd be slow to jump on the Star Wing.  It's got a lot of options in how you build it that should be explored, but I've a feeling it's going to be a lot more awkward to use than a lot of people expect.

Since I wrote about the Gunboat a month or so ago I've refined my expected squad a little bit to add some more variety in the control effects it's bringing...

A very self-contained expansion with little that crosses over to be good on other ships.  There is a good chance that only the top ace pilot Torani Kulda is going to be very strong, which is an argument for buying at least one copy of this expansion, but to be honest I don't think it's an essential buy.


If you're worried about five new ships hitting your wallet at once then the Kimogila could well be one to skip.  Torani Kulda threatens to do fantastic things with his Bullseye arc if you can get it on target but he feels a lot more like a Zuckuss than a Fenn Rau, both in terms of how he flies and how strong he's going to be.

He fits into an Attani-style squad, maybe, to replace Fenn?  But yeah, I'm struggling here...

I think the Resistance Bomber is very cool, and Trajectory Simulator genuinely changes how people play bombs, but I'm not sure it's actually good. The Resistance Bomber is hampered by how much it's entirely dedicated to bombs, and not just bombs but primarily the ones you use on revealing the dial (so no Cluster Mines or Conner Net goodies).  After Miranda Doni and Captain Nym it's actually quite nice to have a Rebel bomber arrive that may just be average, though.


The Resistance Bomber is going to be an interesting ship to see on the table and Crimson Specialist in particular can threaten a huge amount of the table with his bombs.  I'll be picking one of these up but holding fire on going in for more than that - I mostly just want to give Trajectory Simulator a try on my TIE Punishers!

Of all the Bomber pilots I find Crimson Specialist's ability to put bombs all around him the most interesting, and I've combined him with another bit of thinking... 5pts for a Proton Bomb is a lot to pay, but 7pt for four Proton Bombs is a lot more attractive!  It's a brave man who wants to get too close to Crimson Specialist with this loadout, and that control over a large part of the board makes Han's job of evading enemies a lot easier because he knows there's large areas they won't want to follow him into.

Or if you really want to go all-in on the bombs...

The flashiest and most obviously eye-catching of this Wave's ships, the TIE Silencer is a premium grade Starfighter that seems to come wrapped up with a premium grade points cost.  People are loving the potential of darting about at PS9 with Kylo Ren, and while I think the potential for that is a lot more exciting than the reality will be, you're definitely going to see a lot of these things on the table once they're released.


Given it's premium cost (both in points and in actual real life money) I would need to be persuaded to pick up more than one of these things, but having a TIE Silencer in your arsenal seems like something that any self-respecting Imperial player would want to have.  It's going to sit right alongside other top ace options like Soontir, Vader, Quickdraw, Whisper etc.  God damn, but Kylo Ren is an expensive pilot, though. 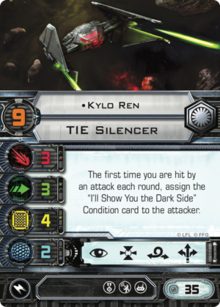 While everyone else seems to be getting tied up in trying to turn Kylo into a 45pt super-Soontir, I think that's a red herring.  He doesn't have an Evade action, he doesn't have a 4th green dice, he doesn't have a free Focus token... even with 3 more hull he's massively more vulnerable than Soontir Fel so sitting that many points on him feels like a trap.

I think Kylo Ren is best fielded as a knockabout jouster and you want to keep his cost down as much as possible...

I Will Settle What You Scored (Silencer Edition)