My last blog was probably a bit more obtuse and/or self-indulgent than most X-Wing blogs would manage.  I was quite proud of it at the time because I thought it worked on many layers and levels, but given how many times I had to explain to people that it wasn't a 'grrr turrets suck' blog means that all those layers and levels obviously weren't quite as transparent as I thought it was! 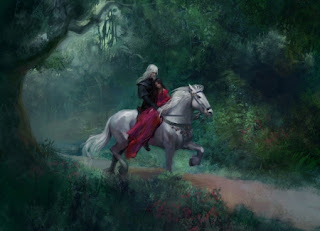 Rather than an anti-turret blog it was, if anything, the opposite.

The blog was about a rider (myself) who chose a path (jousters) because unable to tell which was the better route he chose the one he would like riding down.  The rider then stuck to that path despite repeated opportunities to change direction because the pressure of reaching the castle as quickly as possible (prepare for a competition) meant that he ignored options that would broaden his experience but slow him down in the short term.

It was a blog about how those short term decisions accumulated to leave the rider feeling trapped on a path that had become difficult and uncertain.  It was about the rider was angry then came to realise that his predicament was in large part the result of his own decisions.  When the rider decided to head back to the East it was because he (yours truly) had realised he had to give up on his immediate dreams of winning the tourney at the castle, choose a different route and widen his experiences.

I've always played jousters.  I've dabbled with the odd big turret now and then but never really felt comfortable and always run back to the security of the familiar - small jousters, rewarding being aggressive, lots of green dice, live by your wits.  Admirable traits?  Perhaps, but if they're all I know how to play then it's limiting me as a player and when the metagame doesn't really suit those sorts of ships it's likely feeding into my sense of unhappiness with 'the state of the game'.

So I'm going to play turrets for a bit.  I don't want to be a narrow 'single issue' player who can only succeed if the metagame conditions are perfect.  Time to find out what's down the other road.

So... at time of writing UK National Championships are 3 week away and (barring complete disaster) this is the squad I'm going to play...

I might play around with it a little, in particular I've got versions for the Ghost with pretty much every turret from Autoblaster to TLT, but basically this is it.

A bunch of reasons.  In a lot of ways it's the opposite of what I've been playing recently - you can't get much further from the hyper-tokened jousting, and strong green dice defences of Quickdraw, Vessery and Vader than by taking a 0 agility Ghost!  It's also bringing lots of bomb shenanigans for me to worry about, so I'm really jumping in at the deep end with mechanics I've not really played very much.

In other ways, though, it still lets me transfer some of the skills I've developed from my time with nimble fighters.  With Advanced Sensors and barrel/boost options on Captain Nym and Hera's ability to switch her dial I still get to play around with repositioning.  Maybe with Hera at the controls even a big dumb ship like the Ghost can have a few tricks in her.

I also like that the Ghost is a little pocket battleship that threatens in a bunch of different ways - big main gun, turrets, cluster mines, and torpedoes from the auxiliary arc.  There's a lot for the opponent to worry about (as well a lot for me to worry about in using it properly!)

Finally, it lets me pair my repainted Scurrg up with the ship that inspired the paint scheme... 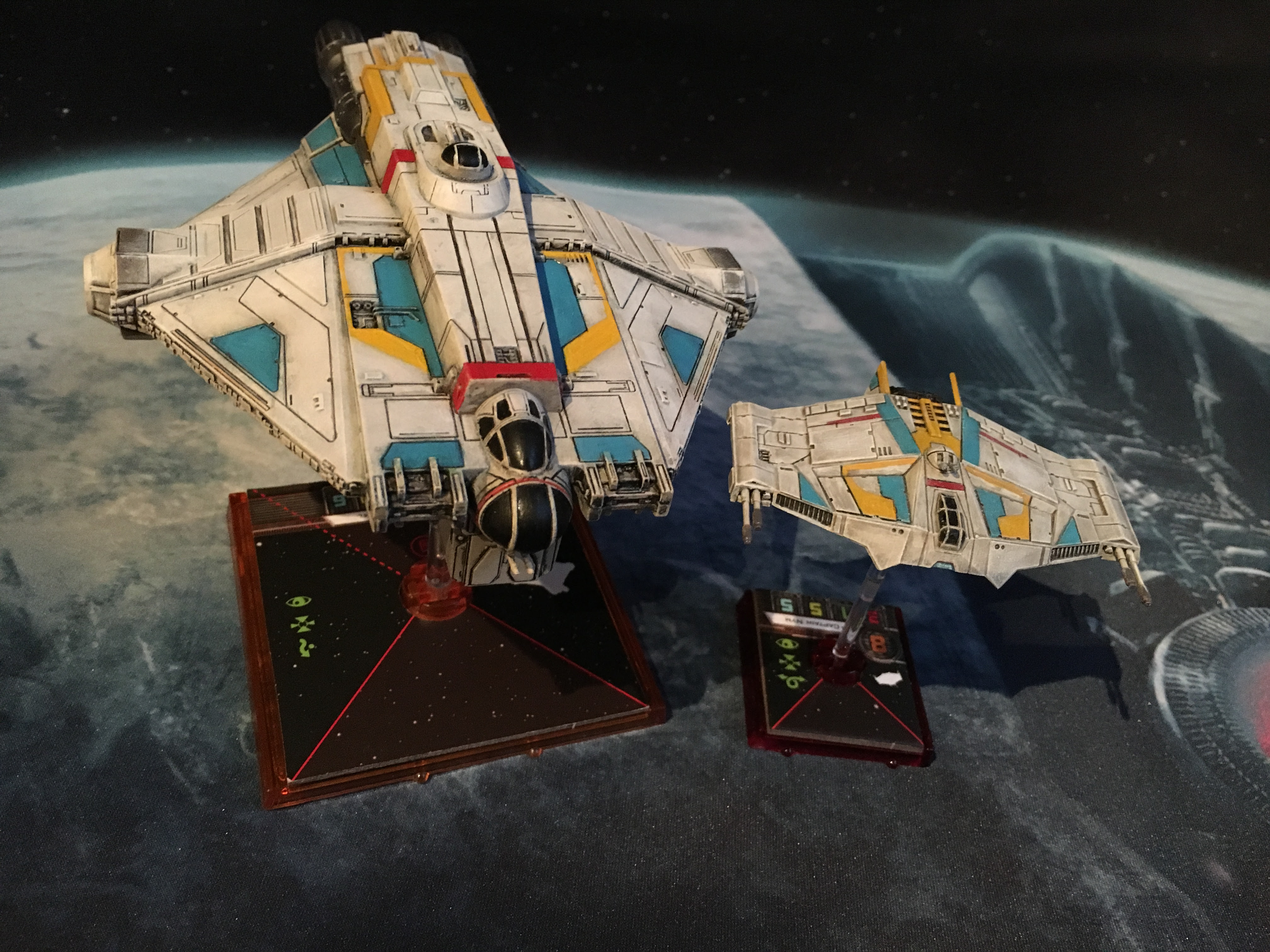 Is the squad any good?

I've no idea!  In fact I've not even put it into the table yet!  That's not really the point, though, because my last blog was about realising that I should go back to the fork in the road and start again down a different road.

I'm sure I'll do worse at Nationals with this squad than I would with my trusty Imperials, but there's a 99.9% chance I won't win whatever I take.  I'm abandoning the short term imperative of being competitive for the long term goal of becoming a more balanced player.

I've got three weeks to put this list onto the table as much as possible, figure out half an idea of what the hell I'm supposed to do with it, and then throw it into the field at Nationals.  If I go 50-50 with it I'll be happy.

Where did the squad come from?

Although it's different in a lot of ways, the obvious jumping off point for this squad's existence is the "Kel Special" created by Kelrien.  The central principle of the Chopper/Sabine/Clusters combination on the Ghost comes from there and that's probably the defining thing.  What's I've changed is that Captain Nym comes in cheaper than the Miranda Doni used in the Kel Special, and that's meant I can scrape the points together to use Hera Syndulla instead of Lothal Rebel.

I always liked the Kel Special but never got around to playing it (because it wasn't a jousting list) and Captain Nym's arrival is a good opportunity to give it a new twist.

But still, the big tip of the hat for original inspiration goes to Kelrien. 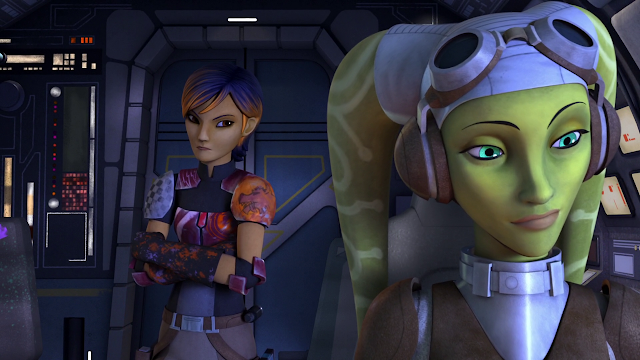