I can't speak for anybody else, but so far I'm finding Heroes of the Resistance a major disappointment.  I was so excited for this pack and what it brought to the table for the Rebels, but the reality seems to be that it is falling short.  I think pretty much every group around the world will have put a version of Rey onto the table to test, but the feedback I'm getting is that she's generally not working out.  Alongside Rey we've got a very poor Chewbacca and an unusual new Han Solo that I think it will take a while for people to really work out.  In the T-70 corner there are some amazing pilot cards, but the rise of TIE Defenders in tournaments mean that even the new T-70 pilots are still a little outclassed in a dogfight.

So where a couple of months ago I thought we would be looking at A New Hope for the Rebllion in all-new Rey/Poe tournament winning squad, instead the Rebellion has turned out to be a variation on the old hope - Corran/Miranda. 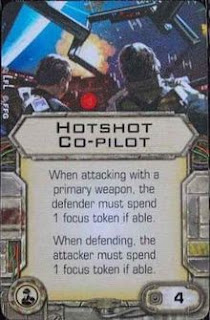 Away from all the frantic testing around the new Rebel pilot cards in Heroes of the Resistance, though, something that I had initially ignored has caught my eye: I'm learning to really appreciate the Hotshot Co-Pilot.

What Hotshot Co-Pilot does is it forces your opponent to spend his Focus token against you at the first opportunity.  If you have a high Pilot Skill this means that you're likely to be firing first and thus removing his Focus in defense.

It's a slightly confusing card, rules-wise, with players finding an array of niche cases of "but what if I do X do you have to spend a Focus then?" but in 99% of circumstances and situations the use if quite clear - when they come to their dice modification step they have to spend a Focus.  It doesn't matter if they've got any eyeball results on their dice on not, it doesn't even matter if they HAVE dice or not, the dice modification step gives an opportunity to spend Focus to turn all eyeball results into hits/evades so they have to spend it.

The immediate advantages of this are not so clear, and certainly didn't seem worth 4pts to me, so I wasn't really looking at Hotshot Co-Pilot very closely.

EDIT: I missed this first time around, so you may have too - Hotshot Co-Pilot only triggers when you are attacking with a PRIMARY weapon.  So it's no good on TLT K-Wings or the like.

The list that first made me pay attention to Hotshot Co-Pilot was the one played by Doug Howe to win the Regional in Omaha a couple of weeks ago, which featured a new spin on the classic pairing of Decimator and TIE Phantom.


Instead of the usual Chiraneau/Whisper we saw the less fashionable Echo behind the controls of the TIE Phantom, but most interesting to me was the use of Hotshot Co-Pilot in one of the Decimator's precious crew slots, in particular it seemed to be replacing the stalwart Decimator crew Rebel Captive.  I get the relationship between Gunner and Hotshot Co-Pilot: you fire once to burn their Focus token hoping that they'll avoid the damage, then fire again once the Focus token is gone and push for maximum damage against their depleted defences.  It's a good way of pushing more damage through but for a combined 9pts it felt far too expensive.  Replacing the defensive crew of Rebel Captive with Hotshot Co-Pilot to deal more damage seemed very reckless.

Then I had the 'mind blown' moment.  Hotshot Co-Pilot isn't just helping you push more damage through with Gunner, it's also damage prevention that effectively cancels 25% of incoming damage by ensuring people firing at you don't have a Focus token to spend on their attack!  In fact, when I ran the numbers, it turned out that removing a focus from your opponent before they attack is roughly as good as using C-3P0 crew to ensure you get an Evade result, and even better at range 1!

This cast Hotshot Co-Pilot in a different light - it's virtually a dual-threat upgrade that both helped you push damage through with Gunner but also contributed to your defense.

The second 'epiphany' moment came when I realised that Gunner gave you the option to fire at a second target and remove Focus from that as well!  The twin upgrades of Gunner & Hotshot Co-Pilot combine to provide either extra damage (by hitting the same target twice) or maximise defenses (by stripping Focus from two different opponents), as the situation demands.  What was more, you didn't have to save that defensive bonus for shot coming into the Decimator, you could use Hotshot Co-Pilot almost like a shield to protect other ships in your list!  To use the above squad in the example if Echo found himself in a bad spot then Chiraneau could provide suppressing fire onto two ships that would be about to unload on the Phantom, helping to keep him alive.

Compared to the C-3PO that players are happy to pay 3pts for on the Millenium Falcon the defensive benefit of Hotshot Co-Pilot could be significantly more, and it can be thrown out to cover your other ships! 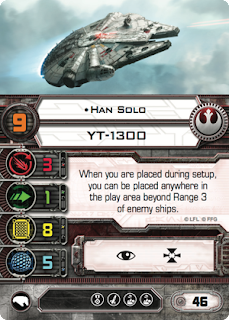 This list I'm trying out brings me back full circle to where I started the blog, because after Rey has proven a disappointment I wanted to give the new 'old' Han Solo pilot ability a run out (partially inspired by the success of Jack Mooney's Han/Jake list at the World Championships).

I think this Han Solo pilot ability is potentially extremely powerful, but I also think that it will take players some time to really figure it out.  Every time you bring Han Solo to the table your opponent has to worry about where you're going to set up, and will likely to have to change away from their usual plan.  Getting 'turn 0' wrong by deploying your ships or asteroids in the wrong place can be almost impossible to correct once the game is underway, and Han Solo gives your opponent the opportunity to screw up their deployment whether you ultimately decided to deploy Han right across the table or not!  I wanted to experiment with that, but also give Hotshot Co-Pilot a runout at the same time.

Trying to field the fattest possible Han Solo meant scraping the barrel to fit Poe Dameron in as cheaply as I could but it just about worked.  The reason I went for Poe as a partner is twofold:


It's going to take a bunch of games to learn the various kinks in the new Han Solo, but the first couple of games we've played definitely proved the defensive value of Hotshot Co-Pilot, although it also showed that the dual nature of the upgrade would take some getting used to.  It's very tempting to get locked into stripping Focus from two ships every turn but that doesn't tend to deal very much damage, so there's going to be a balance that needs to be struck and it seems like Han really needs to work closely with Poe to focus down the same targets.

B is for Bossk 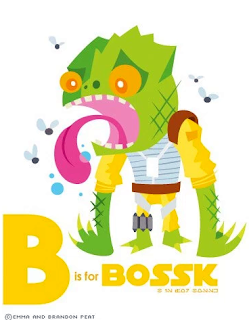 This Scum list follows a similar template but takes advantage of the unique ability of IG-88D crew to bring a 'gunner' effect onto Bossk's YV-666 for just a single point!  Sitting up at PS9 Bossk functions as overwatch artillery for the list, with Hotshot Co-Pilot functioning to help push critical hits through with his Mangler Cannon, reduce incoming damage from one or more targets, or shield his Aggressor partner if the opponent chooses to chase them instead.

This list is entirely untested but shows how Hotshot Co-Pilot can fit into some creative lists.  After some games I'll get a feel for which ship my opponents are targeting first, I assume it will be Bossk but if players feel they have better chance against the Aggressor then I can make it tougher to kill be replacing Fire Control System and Glitterstim with a Sensor Jammer.  Turning hits down to eyeballs with Sensor Jammer can be very profitable if Hotshot Copilot is already stripping focus from them!

EDIT: just as I'd missed that Hotshot Co-Pilot only works with Primary weapons, so I'd not realised that my IGG-88/Bossk plan is a little compromised by this.  It's not 'dead',it just means Bossk won't be able to strip Focus from two different targets as his cannon shot won't trigger Hotshot Co-Pilot.  That's not so bad, and seeing as I've paid a bargain 1pt for my 'Gunner' I'll take a bit of loss in power!

There's various loadouts to choose from, so the two Mangler Cannons could be a Tractor Beam on Bossk and a Heavy Laser Cannon on IG-88B, for instance.  That would maximise your damage when used in concert, but doesn't play particularly to Bossk's pilot ability the way Mangler Cannon does.

So throughout this blog I've talked about the strength of Hotshot Co-Pilot, particularly on defense, but let's recognise that it's not always going to work like that.  Any time your opponent takes a Target Lock action instead of a Focus then it does nothing.  Any time they've got multiple Focus tokens, or can regenerate them with something like Overlocked R4, it does nothing.  In a field stocked with Attani Mindlink, Manaroo and Dengaroo lists the value of Hotshot Co-Pilot is a lot less certain.

I'm not putting my Gold Standard 'this is a great upgrade' seal of approval onto Hotshot Co-Pilot just yet, but I'm going to continue exploring just how much it can contribute to both defense and offense in a single slot, particularly in conjunction with Gunner abilities.  For an upgrade that I'd originally discounted I'm very interested to see how it actually performs.