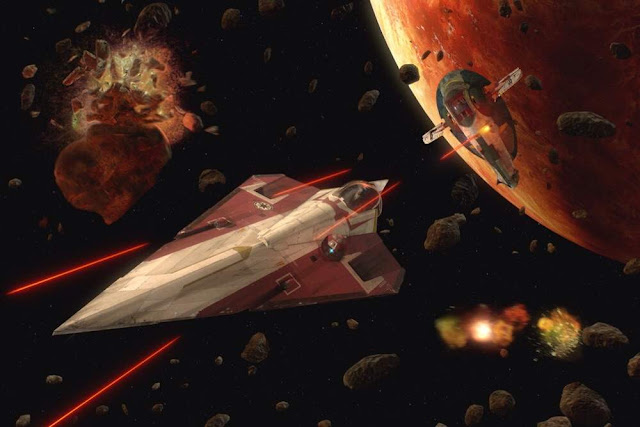 
Everyone flocks to the Galactic Republic faction for its clone troopers.  Faceless and featureless the clones make the Republic one of the most dynamic and exciting factions to play. 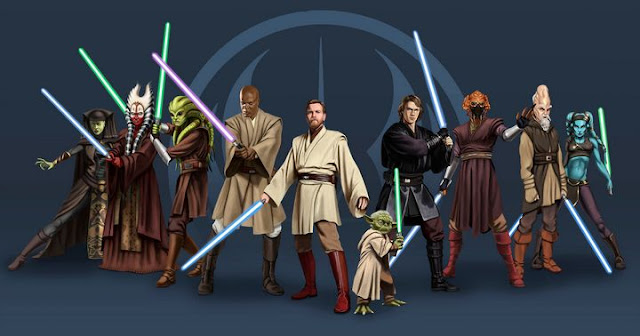 The forces of the Galactic Republic oversaw peace and order in the galaxy before the dark times.  Before the Empire.  In this faction you'll find many members of the Jedi council: Ahsoka Tano, Plo Koon, Obi Wan Kenobi and of course a certain Anakin Skywalker.  The Jedi fly their distinctive triangular starfighter and with the Force as their ally they make for incredibly varied and dangerous foes.  Alongside the Jedi you'll find the clone troopers, they may be less exciting and glamorous but their ships are tough and dependable in a scrap.  The Jedi can't be everywhere in the galaxy and clones do a lot more than just make up the numbers.

In terms of playstyle the Republic faction is incredibly customisable and can play most styles pretty well.  It's certainly possible to field the Jedi as powerful aces who can use their mastery of the Force to dodge attacks and ensure they get the best positions on the table.  At the other end of the scale a massed army of clones in their V-19 Torrents and ARC-170 Starfighters can bring massed raw firepower capable of winning almost any duel.  And in between those extremes you can mix and match the two styles almost at will and the challenge with the faction often comes down to having to make difficult choices between several ships and pilots that could all work well.

The Guardians of the Republic boxed set is a fantastic launchpad into the faction and I think any budding Republic player should start there.  Not only do you get your first three ships but it's home to some unique Jedi pilots that aren't in the Aethersprite expansion pack (including Obi-Wan Kenobi) and it comes with a lot of the upgrade cards that you'll need to load out your squad and make the most of the ships you buy. 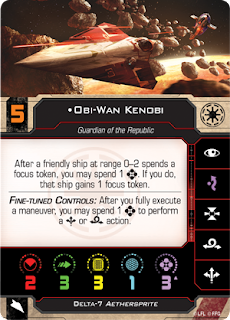 From there it's possible to take your Republic collection in any direction as all the ships are good.  Probably the first thing I'd do is buy a second Aethersprite from the expansion pack as it gives you access to the other Jedi pilots and Anakin Skywalker.  The only thing better than playing with a Jedi is playing with two Jedi!  In this example I've also added the speedy N-1 Naboo Starfighter to create a trio of high Initiative ace pilots, including paying a lot of points to upgrade both Jedi starfighters to the battle-ready Delta-7B variant with increased shielding and firepower! 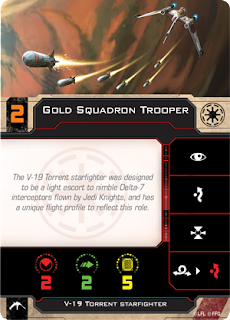 But as an example of how different the Republic squads can be, in the squad below we take the same startpoint (Guardians of the Republic and an Aethersprite expansion pack) and instead beef up our forces with three cheap and efficient clones.  The cheaper Calibrated Laser Targeting upgrade keeps the cost of the Jedi pilots down meaning we can bring in some extra guns. 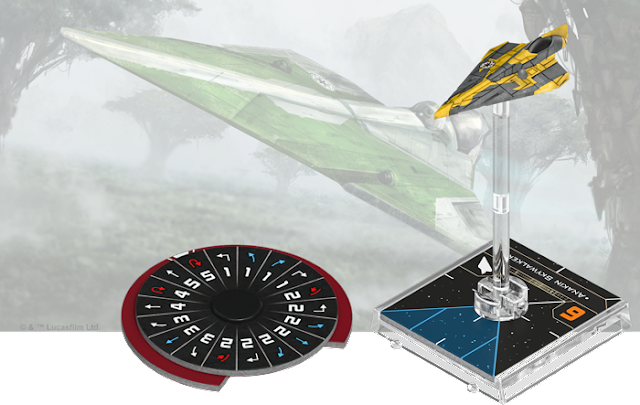 Important: you get an Aethersprite in the Guardians of Republic box, but the individual ship expansion features different pilots so you'll almost certainly want to pick up both packs.

The Delta-7 Aethersprite is the chosen starfighter of the Jedi knights.  It may look small but in X-Wing this hugely customisable little fighter has several configuration options and is almost like two, or even three, different ships that can fulfil different roles depending on whether you take Calibrated Laser Targeting, Delta-7B, or no configuration at all.

Without any configuration at all the Aethersprite is like a little A-Wing or TIE Fighter buzzing around at high speed but not really posing much offensive threat.  That wouldn't be too effective for normal pilots but all the Jedi come to the table with unique Force abilities and so without a configuration the Aethersprite can function as a little support ship.  Adding the Calibrating Laser Targeting upgrade to your Aethersprite doesn't cost many points and can really transform the damage output of your Jedi if they can line their shots up carefully.  It's still a delicate little ship that can't take much punishment, but CLT adds a lot more threat to the ship.

The Delta-7B upgrade, though, transforms your nimble but fragile Aethersprite into a much tougher fighter that's more like a T-65 X-Wing than an A-Wing, translating some Agility for more shields and laser cannons.  With a Jedi master like Obi-Wan Kenobi or Anakin Skywalker at the helm a Delta-7B is one of the most complete starfighters in the game - lightning fast and agile, able to regenerate lost shields with R2 Astromechs and dealing out blistering Force-assisted attacks. 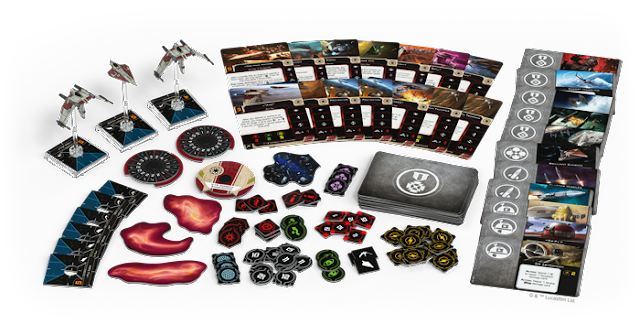 V-19 Torrent (in Guardians of the Republic expansion)
Easy to fly, average strength

There's no standalone expansion for the V-19 Torrent but you get two of these little Clone troopers in Guardians of the Republic and, yeah... they're alright.  The V-19 Torrent is slow, weak and unglamorous but also has a very low points cost that makes up for all of that.  A lot of the time it simply takes so long for the enemy to waste time killing a Torrent that they'll just ignore it to choose a more valuable target, which then allows the Clones to get in close and start dealing real damage.  The Torrent has found a role filling out Republic lists and also became the backbone of a Republic swarm alongside Sinker's ARC-170 to make them punch much harder.  On face value the V-19 must be among the candidates for 'worst' ship in the game and yet it's a testament to how well X-Wing is designed that they're actually pretty good anyway.

Also of interest: None.  If you're spending more than 25pts on a Torrent you're probably doing it wrong. 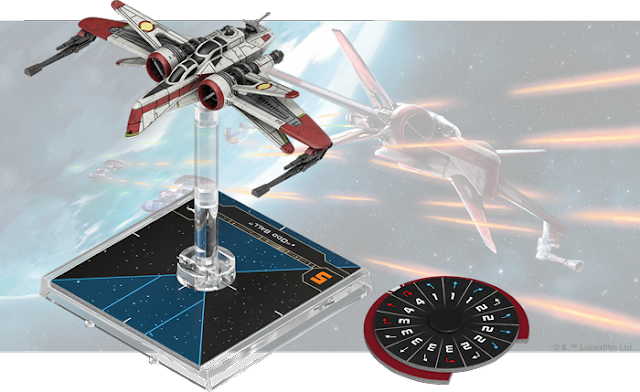 The ARC-170 is an almost foolproof ship for a beginner to fly.  It doesn't have many maneuvers to choose from, it has plenty of hull so it won't die and it has front and rear guns so if you point it the wrong way you still get to fire!  The Rebel ARC pilots are all pretty expensive in points cost but here in the Galactic Republic their clone pilots are bought en-masse from the Kamino and come in cheap enough to do all the dirty work that the Jedi are too high & mighty to do for themselves.  There's several strong ARC-170 pilots but you don't often have to look much further than the efficient 104th Battalion Pilot who for 42pts has to be one of the most efficient and straight forward hitting sticks in the game.

Also of interest: None

The Naboo Starfighter is the yellow streak of lightning that little baby Anakin whizzed into battle in at the end of The Phantom Menace.  It's a speedy ship that loves to be flown fast across the table and that is both it's strength and its great weakness - hard to pin down and kill, but also tends to travel so quickly that it's only in the fight half the time before it leaves all the lasers behind it and has to turn back around again for another pass.  Only one Naboo pilot has really proven their mettle to date, Ric Olie, and his main strength is baiting opponents into wasting time shooting at him when they should really know better.  Ric has been a fixture in some very successful Jedi ace squads but there's always the suspicion that he hasn't actually done very much apart from whizz about and stay alive while the Jedi do the heavy lifting.

Also of interest: Crack Shot (Guardians of the Republic)

You may not have known it when you watched the Battle of Yavin unfold in Star Wars: A New Hope but the Rebel Y-Wings were rolling into their attack run naked.  It turns out those scrawny Y-Wings should be sleek and elegant as they were originally intended, with layers of extra armour plating.  The Galactic Republic flies those OG Y-Wings and despite the cosmetic changes they're pretty much the usual reliable bodies that the Rebels and Scum get from their Y-Wings.  You won't set many tables on fire by fielding a BTL-B Y-Wing but they're dependable and in Broadside and Matchstick at least have a couple of pilots with strong abilities.

Just as interesting as the ship itself the BLT-B Y-Wing also comes with some great upgrade cards so you'll likely find yourself picking one up just for that reason.  Foresight and Precognitive Reflexes are good Force abilities, while the cranky astromech C1-10P is making a strong play for being my personal favourite upgrade card in Second Edition.